About a year ago I installed a little Dayton thermostat in the interlock line to Mr. Harris, set to open at 110 degrees F. Last night at about 1:39 am, it tripped while I was sleeping. I couldn’t figure out looking at the telemetry data half asleep what was up, and just decided to go check it out. 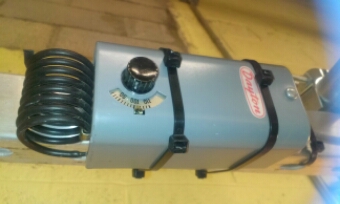 The fault was a very common and dumb one, a seized a/c condenser fan motor. However what I found down there was…. Amazing. 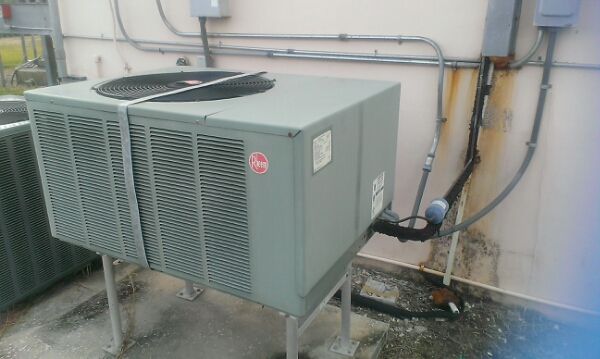 Old Rheem… Just about as cost engineered as it gets without going all the way down to Goodman / Janitrol (Junktrol). 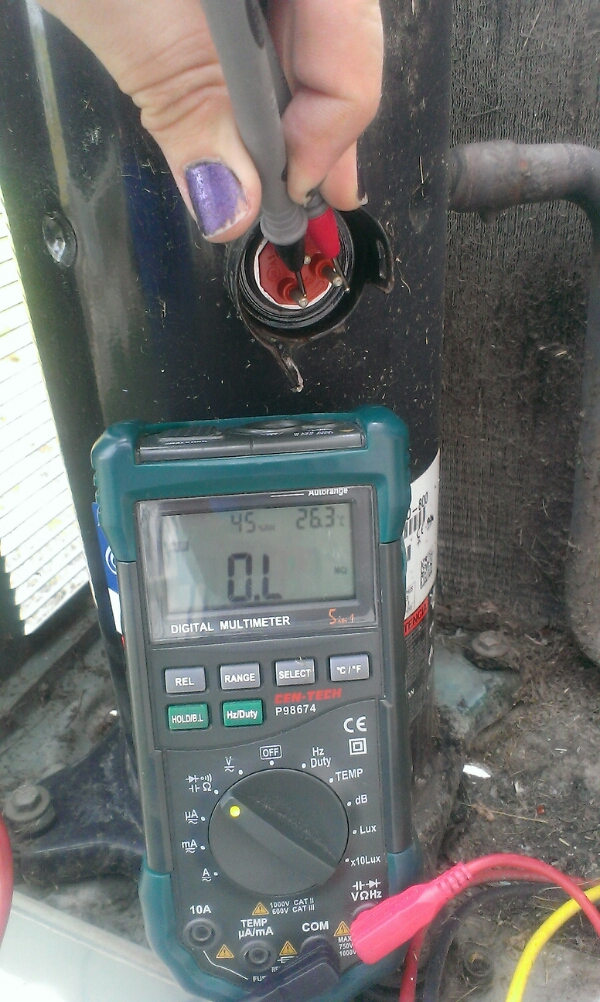 Uh oh!! This is either “Game Over” or “just wait a few minutes for the reset”. Thankfully it was the latter. The thermal breaker reset after I started hosing the crap out of the evap coil. 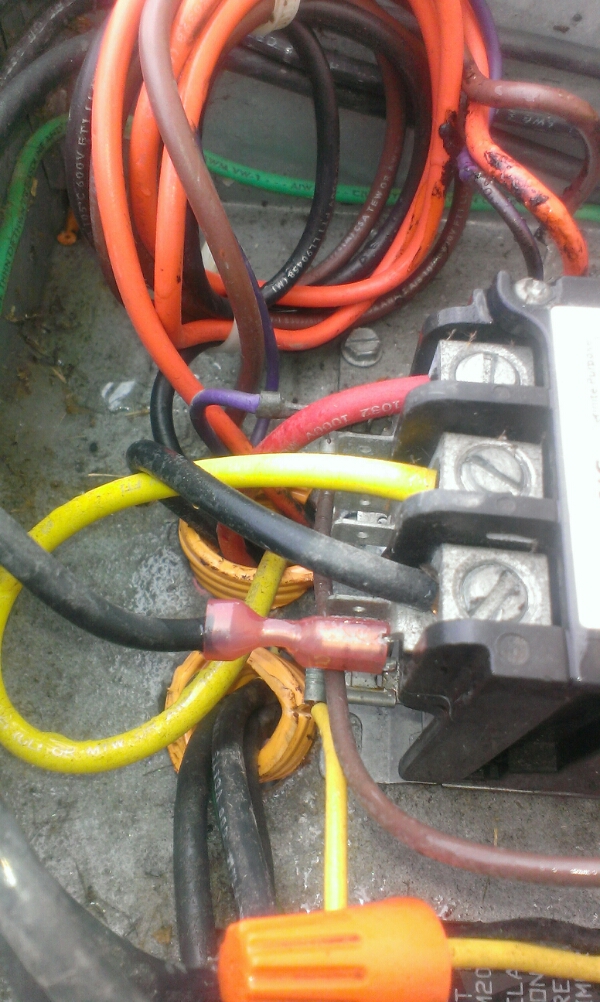 All Rheem units of this vintage and design have the wires to the fan and compressor running through barely rounded off holes in the sheet metal electrical box. Rubbing was visible on some so I field modified a bit of nonmetallic conduit into a pair of protective sleeves.

Here’s where the fan motor run capacitor is supposed to go. 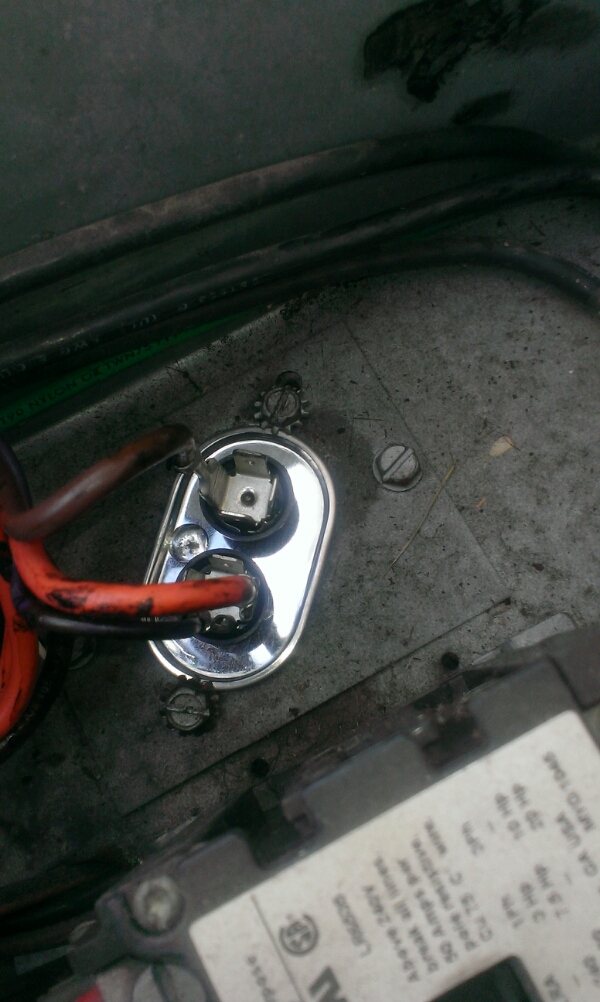 Here’s where I found it. 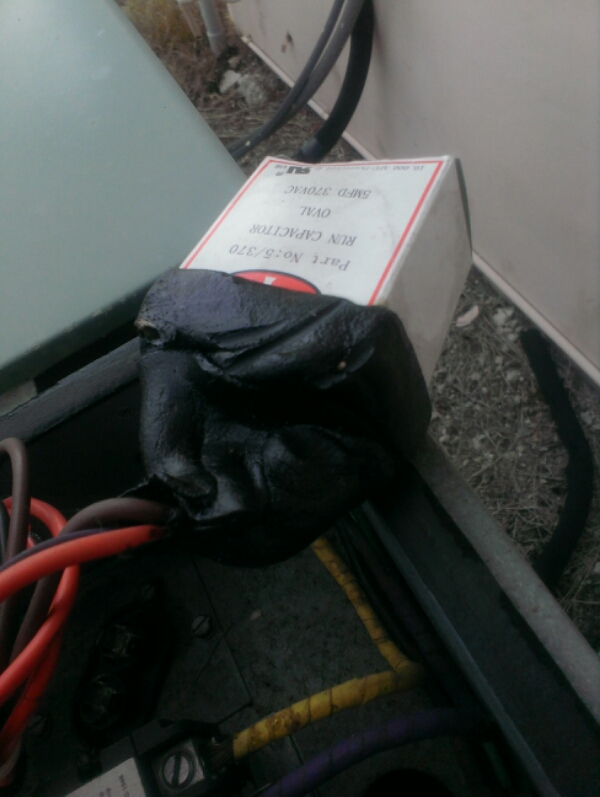 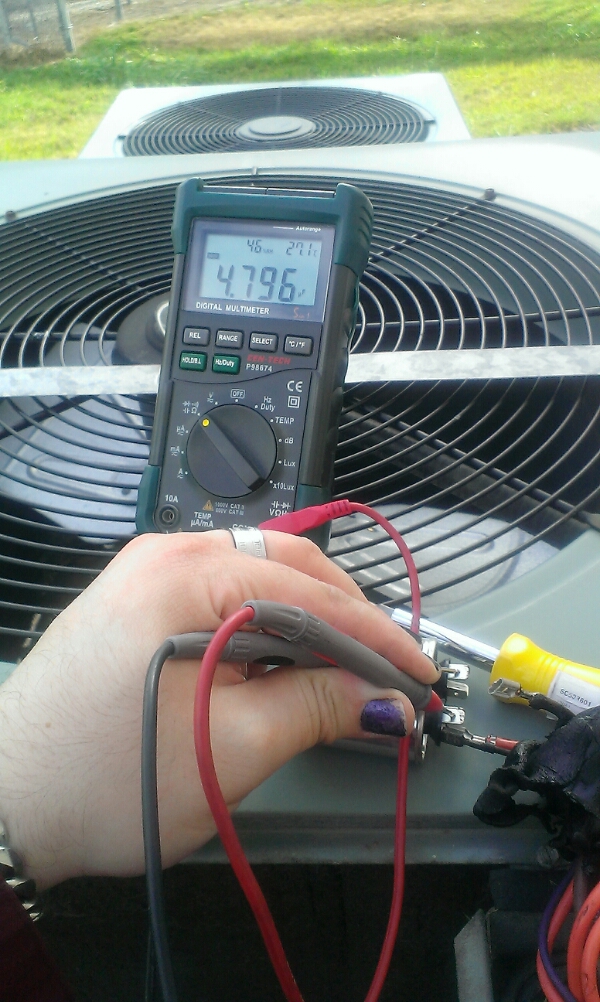 After removing it from that cardboard and self-amalgamating tar tape coccoon, I found it tested good. Weird!! It was even exactly the right shape and size to mount in the flange seen above, WHY was it like this?!

Also, we’re not going to talk about the fact that a single phase fan motor was inexplicably plopped on a 3 phase unit? (Every Rheem I’ve seen is like this.) 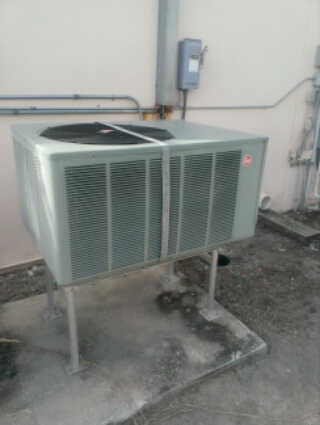 What a weird mess. Maybe I should have been an HVAC tech. Or maybe not… I’d probably get excessively mad at someone first day on the job and slice them to death with a sharpened condenser fan blade hammered into a shuriken of death.

EDIT: The underlying fault was that the condenser fan bearing has a bad spot. If it stopped in a certain place, the motor would not have enough torque to start turning the fan again. This caused it to pretty much become the worst form of roulette wheel. Our A/C guy brought out a replacement motor but we goofed – I read “208” in giant numbers on the side and assumed that meant it was a 208/240 volt motor… he put in said motor and it went AAAAAAAAAAAAAAAAAAAAAAAAZZZZZZZZZZ*POP* and let the genie out after about 20 seconds… ON 480 VOLTS! Oopsie noodles. 🙁

Also before anyone comments on electrical safety hazards with my rings and stuff — this unit was disconnected at TWO different points and verified to be 100% voltage-free before I went at it at all. There was just no way anything nasty could happen. I took a nice solid hit of 480 on Halloween night in 2000* and it was one of the most painful things I’ve ever experienced. It is an experience I do not want to repeat. Thus, I would not even get near the unit until I’d opened both disconnects in series with it. NOOOOOOPE!!!

One of the weird side effects of this was that it caused nerve damage. The human nervous system has a remarkable ability to rewire and retrain itself, unfortunately, it didn’t exactly follow the blueprints quite right and the nerves in my hands actually start misfiring very bad phantom sensations if I *don’t* at least have something sitting against my wrists. 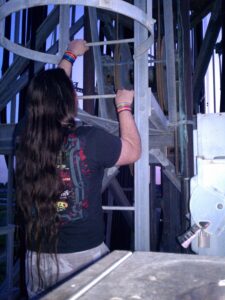 You can see my old workaround for this here, and that actually WAS free of any electrical safety hazards. Some of them even glowed in the dark.

The peculiar advantage to this? I don’t need a logic probe to figure out if a pin on a chip is being pulled up to 5v… I just have to touch my thumb to ground and hold a nail or other small conductive object between two other fingers and I can feel it. digitalRead(); this, baby.

* I make it sound more interesting than it actually was – it happened due to touching parts of two adjacent yet not electrically bonded escalators that had just been freshly miswired and put into service. It was just a dumb coincidence it happened on Halloween.