I find the following amazing:

Things you can buy locally in South Florida without waiting a week for shipping!

Things you cannot buy locally in South Florida without waiting for shipping:

I had a fun time calling around this morning to find this out– Grainger only has two locations left around here, and even the sales lady on the phone was surprised by this. She was used to South Florida having a ton of them a few years back. I first learned of the Richmond Heights one having closed up shop when my last brush with high energy explosion happened… Luckily the one remaining location happened to have a VFD in stock I could use. Phew.

Grainger were the only ones who would be able to get the fuse holder here next day because they had them in a warehouse in Orlando (they also have their own trucks, so I’m confident it didn’t get melted down in Hialeah in the UPS warehouse fire). They had TWO in stock, dashing my plans to get three matching ones for the 3-phase VFD— oh well, different fuse holders but same fuses, whatever works for now. A 3 pole fuse holder would have had to ride the slow boat from China, just like if I’d wanted three of the single pole ones.

What bugs me is I USED to have the exact fuse holders I would have needed but threw them out last year, trying to reduce the size of my collection of parts I thought would be easy to buy again if needed.

Anyway, here’s the beautiful mess that inspired me to get very mad this morning while standing in front of a voltageless robot.

The problem: VFD controller smoked out. I didn’t take any pictures of the outside of the controller for it looked unremarkable save the “MOFF” error flashing. It looked like “ПOFF” due to the limitation of it having only a 7-segment readout, more rambling on that later. It might as well have said “F.OFF” though. The error meant it wasn’t getting sufficient voltage on the internal DC buss.

A quick primer on how VFD drives work: 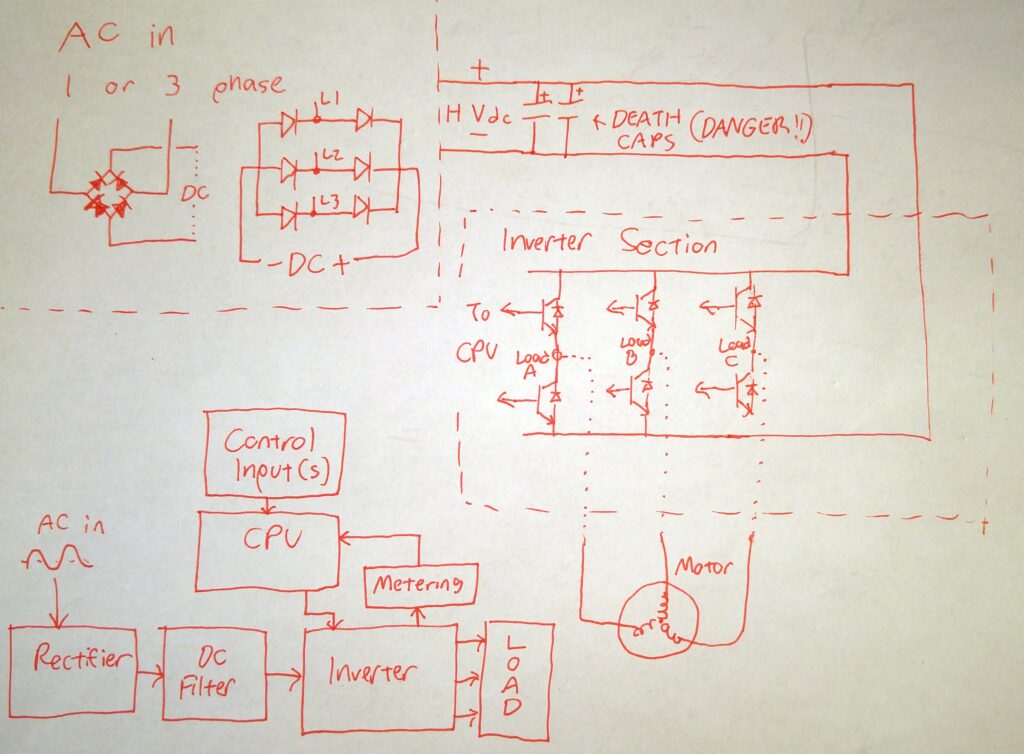 On this inverter, the high energy semiconductor devices for the rectifier and the inverter were neatly built into one easy to deploy little module by Infineon, an EasyPIM series module.

I’ve seen similar modules in several VFD drive products. They contain multiple transistors and diodes coupled thermally (but not electrically) to a backing plate for heatsinking purposes. To avoid undue stress to the semiconductor junctions, they are filled with a curious sort of…. snot.

Sorry if I’m grossing you out, but touch it sometime, it’s really reminiscent of a sticky booger.

A similar product to that is Raychem’s “GelGuard” which I’ve seen used in outdoor telephone connectors. Very weird stuff.

Here is a diagram of the EasyPIM, borrowed off the Infineon website. 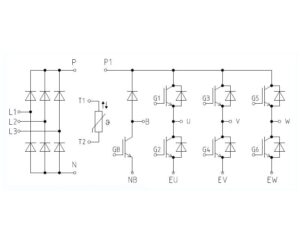 Here’s… what was left of the module… This is 180 degrees to the layout of the diagram above, more or less, and I picked away the blackened snot to reveal what…. DID NOT remain… 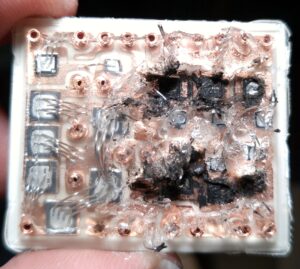 The obliterated parts are the rectifier diodes. Even though only four of the six were used in circuit due to this being a single phase drive, the remaining two were blasted to smithereens by excessive reverse voltage. The IGBTs at left (right in the diagram) that control the outputs look pristine and would probably even test good. Sorry, too lazy to whip out the ESR meter. (Does that even work on high voltage IGBTs?)

The CPU block in the above diagram is the timekeeper of the operation. It reads in whatever form of commands the unit is set to accept as to which direction and speed to run the motor. It also monitors several analog values throughout the unit – voltages, current levels, and temperatures – and can adjust its operation to protect itself and the motor if necessary by throttling back the amount of power it sends to the motor or shutting down if necessary. In this case, it was successfully detecting the lack of high voltage DC to run the drive and just wouldn’t do nuffin’.

Now if the damage had been confined to the module – that’s actually a standard part from Infineon and could probably just be ordered, buuuut—-

Yeah, this let it all right. It almost looks like the conformal coating tried to contain the Magic Smoke, and maybe even flashed over? The two line fuses for the drive were blown so something fun must have happened on the board itself. If the rectifier had just failed short, I would have expected ONE of the two to have gone, not both simultaneously. Flash to ground probably got the other one.

The client has been having a drive blow up every three months or so!! I’m going to retrofit the machine for him with some BIG HONKIN’ SURGE PROTECTION. After his first VFD blowout he called in Florida Plunder & Loot who did *something* to adjust his line voltage, but it’s still mega nasty. I’ll put the scope across it before installing the new drive and likely cringe so hard my face freezes that way for life.

Amazingly the drive still powered up, scrolled “HELLO” before going to “MOFF”, and I was able to get all the settings from it via the front panel user interface. See the small transformer at top left on the board? I suspect there’s a separate switcher power supply just for the CPU and logic that allowed for this even though the HVDC system was blown to bits.

And herein is another bit of rambling: The user interface on VFDs, for the most part, royally sucks. You’re presented with a menu system on the front panel which gives you anywhere from about a dozen to *HUNDREDS* of parameters, identified only by number. You have to break open the manual and go through dozens if not hundreds of pages of crap if your setup is in any way complicated. Fortunately THIS ONE IS NOT. This one was simply being driven by a +24vdc trigger to turn the motor on, and 0-10 volts DC to control the frequency between 0 and 60 hz. But still— Nice features I’ve seen in some units: Danfoss and Cutler-Hammer VFDs have a small control module that speaks plain English to you. Some other controllers (I’m unsure what brands off the top of my head) save the parameters to a small serial EEPROM or even an industry standard memory card, so if your drive does— this— you just swap the card into the new one and you’re ready to spin again.

An important word on the “Death Caps”:

THIS NAME IS NOT UNDESERVED

The capacitors inside a VFD drive will retain potentially lethal voltages FOR A VERY LONG TIME after power off. Even if they are discharged, they may exhibit a peculiar self-recharging phenomena where a stored charge in the electrolyte partially recharges the cap to dangerous levels again. Always discharge caps and test before touching! On a small self contained drive you cannot get in contact with the caps without disassembling the unit; however, I’m aware of there being larger units where the DC section is a separate unit and those can probably really get you. TEST FIRST. Also, if you are storing a spare unit, be sure to check the manufacturer’s directions on maintaining the capacitors!! Most say to power the drive up every year or so to keep the capacitors “formed”. If you suddenly connect power to a drive that’s been stored too long, EXPLOSIVE capacitor failure may occur. If you’ve got one that’s been sitting, consult the manufacturer’s directions for reforming. If unsure, use a Variac to slowly bring the voltage up, or put a small incandescent light bulb in series to limit the current. (The drive should draw almost nothing if it’s just powered up and not doing anything.)