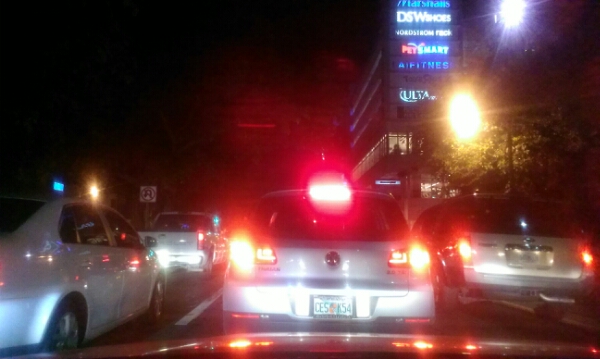 It should come as no surprise to anyone who lives, travels, or works here in Miami-Dade County that it has some of the worst traffic anywhere in the civilized world. As any truly spirited post describing Miami traffic should, this contains copious profanity and pseudo-phallic imagery. You’ve been warned. For a family friendly multimedia version of my commentary, enjoy der aktiv-schaum. (Flash support required ’cause I’m oldschool)

Decades of unchecked growth with no urban planning whatsoever, almost complete lack of usable public transportation, and a street grid layout that forces fragmentation and bottlenecks on traffic flow have left the area in a state of 24 hour rush hour traffic. Last night, for instance, my roughly 20.8 mile trip home had to be extended to 40 miles and 4 hours due to three major roadway closures. This happens on more than a weekly basis.

This isn’t so great for one’s mental health. Last night I saw someone just snap at a light on Pines Boulevard, they had enough of waiting for the signal that was only turning green long enough to allow about three rows of cars on the six lane(!!!) road to pass each cycle and just shot out to make a right turn out of the leftmost lane across the intersection, going off in a blaze of Axsis RLC-300 flashes. To be fair they might as well change the sign at that intersection from “Photo Enforced” to “Pay Toll-By-Plate $186.50” because THAT FUCKER NEVER TURNS GREEN LONG ENOUGH.
I don’t exactly suffer from road rage but I often feel a sort of temporary depression, loss of faith in humanity, and just general malaise after about the two hour mark sitting in unmoving traffic.

One day though I had a stupid fleeting thought upon witnessing someone trying to jam a Range Rover into a space it wouldn’t fit, and that changed my view on Miami traffic to a more manageable one.

Right out in front of my workplace there is a wide median where a streetcar line used to run in the good old days (grumble…). On either side of the median there are two traffic lanes, one of which is usually blocked by stopped delivery trucks or never-ending construction at any time. The driver of the Range Rover, who was pretty much just a giant ugly trust-fund supported tribal tattoo wearing a fedora and a Heat jersey with the sleeves ripped off and texting while driving, tried to make an illegal U-turn and his vehicle just didn’t fit, so he proceeded to block traffic for about three minutes slowly and uselessly pumping it in and out of the space that it would never successfully fit into.

On a rambling side note there was a lot of dumb seemingly Freudian psychoanalysis of rock and roll in which the ubiquitous electric guitar was seen as a phallic symbol… a “technophallus”, as I remember reading in someone’s biography of the great Jimi Hendrix*.

This thing? Autophallus. It was huge, unlubricated (I mean it’s gotta be, those dumbass things only last 30,000 miles!) and it just didn’t fit… but he was uselessly pumping it in and out. Finally he jammed it in by brute force, running over a newly constructed curb that stood with no backfill behind it, and got it stuck!! The wheel jammed tightly in place and could not be extracted by Fedora Douche’s best efforts.

The road was now completely blocked by this jammed autophallus stuck at a 45 degree angle across both lanes, ruining it for everyone. That’s when the word randomly came to my mind:

He had just cockplugged the road.

Thankfully I was on foot, not driving, at the time, because I was no longer safe to operate heavy machinery. The  utter hilarity of this made me nearly fall to the ground laughing and I have never once been able to look at someone trying to wedge their fuckwad land barge into a space it just doesn’t fit into the same way again. I just sit back and watch as they uselessly pump it in and out of a space it’ll never fit in, no matter how they try to wedge it, and if they decide to use brute force and severely fuck everything up you can bet I’ll post pictures of it to the Internet. Another phallus picture on the Internet? Yeah. As if we need another?

The giant steel autophallus stood jammed tightly in place until a tow truck came over an hour later. It was a giant trophy of failure.

* I couldn’t figure out how to work in a mention of the Plaster Caster’s encounter with Hendrix so here it is as a weird footnote. “Hard thoughts”. Composure has been lost. Again. As if finding that image of the wobbling buttplug with Patrick Star’s face on it wasn’t enough.

3 thoughts on “Cockplugged! Or, a holiday salute to Miami traffic. Pingas.”