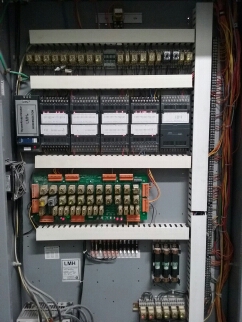 This is the control system for the freight elevator at work in a valid running state (idle, leveled at floor, doors open, ready to serve). I forgot to take a picture of its Fnord state but it looks much different. From the outside, the fnorded state is simply that the doors fly open with an unusually loud bang, leaving you with a six inch or so step up or down to the floor, followed by the elevator no longer responding in any way other than opening or closing the doors.

Update: I forgot, I actually have a video of it… BEHOLD! YOU CAN SEE THE FNORDS!

Many things can Fnord it. To unfnord it, one usually just cycles the power off for a minute then back on, and all is well. This time the Fnord levels were just too great and it needed intervention if the janitor was to be able to get their cart out of there. 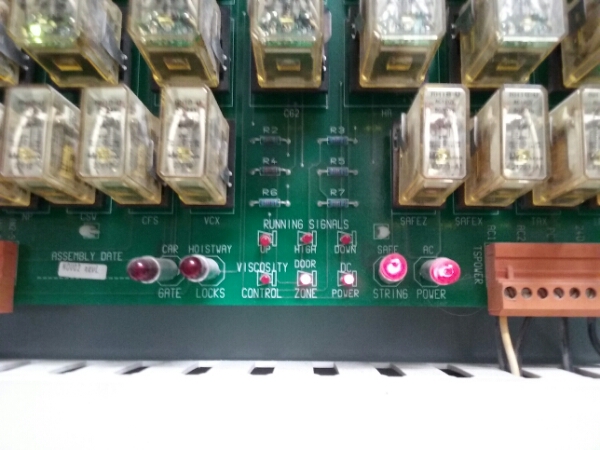 In the fnorded state, it will be stuck  in a combination of conflicting logical operations.

The combination seems to be:

If the elevator is in the door zone and not moving anywhere, do not lock the door.

If the elevator is not lined up with a floor and the doors are closed and locked, move until leveled at a floor then unlock and reopen.

If the elevator is not lined with a floor and the doors are unlocked because it’s in the door zone, commence existential crisis.

The status on the “hydro interface board” shown above indicates it’s trying to move downward but the hoistway is not locked.

Why’s it getting so confused? Well, there are too many cooks here and they’re spoiling the broth. This PLC in a separate cabinet controls the motors that operate the doors. They’re supposed to talk to each other but then one forgets to send a vital memo…

The PLC controls these relays which actually operate the motors. 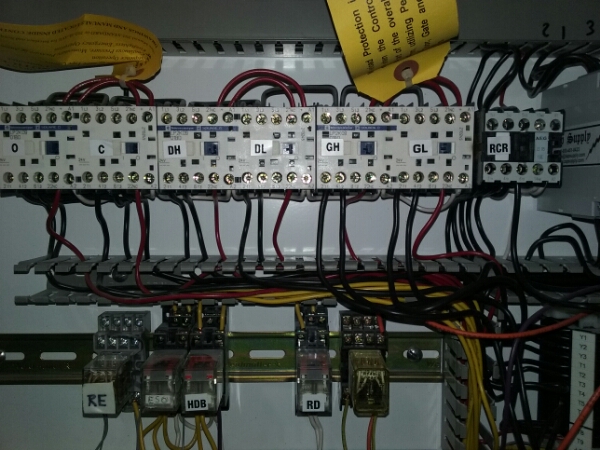 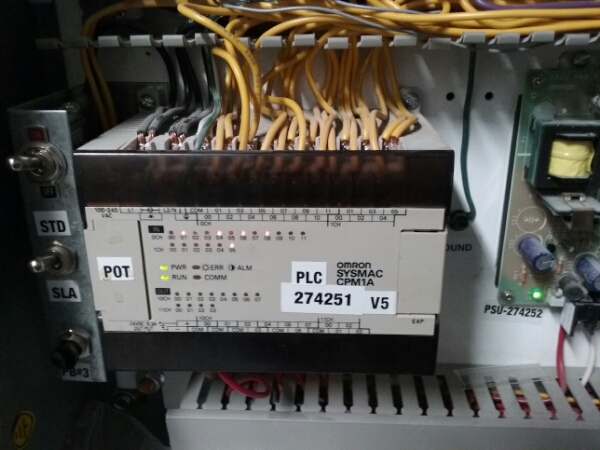 Upon truly understanding just what a confused piece of logic I was looking at, I realized that the underlying failure making our janitors mad was that no signal was calling for the doors to be locked. The PLC was indicating that the doors were closed, but it was beyond me to even make an educated guess as to whether the request to pull the retiring cam comes from the main elevator controller, or the door PLC.

Throwing all caution to the wind I carefully pushed in the armature of the retiring cam motor contactor with a wooden dowel. (There be dragons in these boxes, by which I mean 480vac three phase power).

Click. The hoistway locked light came on at the interface board once the cam retracted and allowed the interlocks to close. This set of relays also lit up; I’m not sure what they do but they don’t light when it’s stuck. I think they’re part of the safety logic. 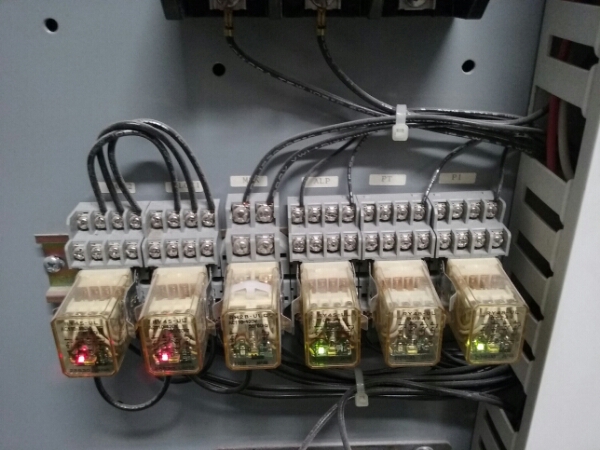 Hissssssss. The down slow valve opened and we have LEVELLING!

I released the relay the moment the valve closed again; prior experience has shown me that the exterior door motors on this elevator will make awful grinding noises if the interlock is not popped open before they spin up. Upon walking out to the elevator I found it was now fully functional.

This thing raises some questions.

One, why is it incapable of recovering from a condition in which the doors are open when it’s not level but in the door zone? This is actually a very normal condition for many elevators, and if it were simply left unused for a couple days it would wind up in this state all by itself as hydraulic oil seeps through control valves or the piston rings.

Two, what is causing the mystery delay? This elevator has a unique and maddening ~20 second delay; once the doors open, it will not do anything for a while. The warning beeper that indicates the doors are going to close will tweet twice, then it just gives up. You just have to wait.

Who forgot to Read The Fine Manuals while setting this up?

Interlock: a mechanical lock that keeps the outside doors closed if the elevator isn’t in line with them. It is opened by the “clutch” (a pair of ramps on the door) in passenger elevators and the retiring cam in freight. It contains an electrical contact that is made only when the doors are locked, clearing the elevator controls to move the elevator.

Car gate: the inside door attached to the elevator.

Retiring cam: a spring loaded cam that can pop up from the elevator cab on freight elevators. It is normally extended and will push on a roller on the outside doors anywhere in the door zone, unlocking them. Applying power to its motor retracts it to lock the doors. Removing power makes it pop back out to unlock.

Door zone: the safe area in which the door can open. I believe the range is 18 inches wide, so +/- 9 inches of where it’s supposed to land. ASME codes state that the door is to be automatically or manually openable in case of power loss or breakdown if you’re in the door zone. Tell that to Adams Elevator and their stupid HatchLatch device preferred ten to one by cheap lazy elevator companies!

Also, if you’re wondering about my ridiculous singing in the above video – this had gotten stuck in my head that day. What can I say, The Sherman Brothers wrote some pretty memorable tunes.