A little background: I drive a car that was made when Ford and Mazda shared a lot of engineering and manufacturing resources. They both used the same engine, but with different intake systems and controls and stuff. I have the Mazda and the dipstick says FoMoCo on it! In addition, well— nobody but me knows what oil filter it takes. It actually takes a CARTRIDGE type filter. Most of the auto parts stores try to convince me it takes a spin on– it’s not. Anyway, this same cartridge filter is used on the Ford models, and I always got either the Motorcraft OEM filter or the Purolator cartridge for each replacement.

I went to a Walmart store for some late night grocery shopping fun (with extra bonus pallet jack traffic and floor refinishing fumes) and picked up the Motorcraft filter. I noticed that all the boxes on the shelf looked like they’d been previously handled, and some visibly opened. I picked up the nicest looking one… Then I noticed… the box was rattling as I carried it back to my cart.

This simply has never happened before. I opened the box to see why– what was rattling?!

The shaking was the plastic cage inside the filter rattling end to end. Curious— I’d never seen one of these where the cage was free to slide back and forth. That seemed like a ludicrously terrible idea, as if it did that with the filter in service in the engine, it’d eventually start wearing through the paper.

Then I noticed it was totally askew. 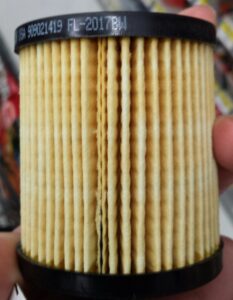 The whole thing tilted a bit like the Leaning Tower of Pisa. Hey, what’s up with that seam? Normally those are pretty closely bonded. 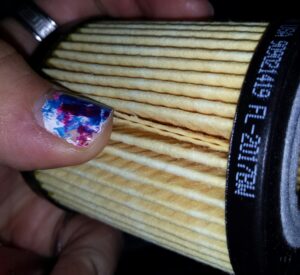 OR NOT! Not bonded at all! I could totally open the seam up with no real effort.

Now I’d like to point out the color of this filter media. Normally, oil filters are made of a thick paper with resin coated fibers, or sometimes a synthetic nonwoven fabric. In the case of resin coated cellulose fiber paper, a thermosetting resin may be used. This is a material that remains workable and flexible during the assembly of the filter, then kicked into its final set state by the use of heat.

This filter shows signs of very uneven heating, coating, or both. No loose fibers were visible… which was a cut above the fresh hell you are about to see here.

Briefly— if you were to place THIS filter in your engine and run it there is a good chance most of the oil circulation would bypass it. Chances are you’d get away without any engine damage.

What follows are weapons of engine destruction.

Fram is a name known widely for low cost, retail channel filter products— the cheap ones you’ll find at your local auto parts store. They were originally built by a division of Allied Signal, who have been bought out by Honeywell.

A wonderful testament to the quality of Fram filters follows. This is from the excellent Oil Filters Revealed page that showed me, years ago, that not all oil filters are created equal.

I worked for two years as the oil-filter production line engineer in
an Allied-Signal FRAM facility and I can confirm every bad thing you
have said about FRAM automotive filters. That’s from the horse’s
mouth, as it were.

I’m also a quality engineer and can confirm that FRAM applies no
quality control whatsoever to any of the characteristics for which we
buy oil filters. I frequently saw filter designs which were barely
capable of meeting J806. Many of FRAM’s designs will block and go to
bypass after trying to filter very little contamination. There were
often leakage paths at the paper end discs when these were not
properly centered on the elements. Some designs had the pleats so
tightly packed against the center tube that they would block off in no
time. I had discovered that the FRAM HP1 that I had been buying for
about $20 Cdn was EXACTLY the same as a PH8 inside – the only
difference being a heavier can – no advantages in flow capacity. The
paper filtration media was of apparently poor quality and the process
of curing the paper resin was very inconsistent – elements would range
from visibly burnt to white. FRAM’s marketers admitted that there was
just about no way the public could ever prove that an oil filter
contributed, or did not prevent, engine damage. The only thing FRAM
tested for was can burst strength. Another problem that they have from
time to time is in threading the filter base – often there are strands
of metal left behind on a poorly formed thread.

I have not used a FRAM filter since I started working there. Their
claims are entirely and completely marketing bullshit.

If people really want to protect their engines, a good air filter is
vital (which excludes FRAM from that list as well) and a combination
of one depth and one full-flow hydraulic filter, together in parallel,
will do the job of filtration to perfection.

Thanks for doing a great job in trying to get the truth out! You can
quote me anytime.

Nice to see that Fram’s complete and total lack of quality control continues to this day. The nice thing about having a car that takes a cartridge filter — NO SECRETS. In fact, I always inspect the cartridge after removing it and letting it drip dry a few minutes to check for any metal or plastic bits. Try that with a spin-on filter!

First up– the Fram Tough Guard. 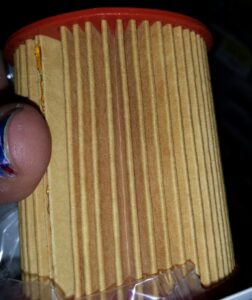 Well, nice to know the resin curing issues were not present as there simply appeared to be no resin. None at all. On handling the filter, paper fiber came off on my hands. The uneven pleating is a little weird but not a show stopper (I’ve even seen it on Purolator filters for the first pleat or so right near the seam) and the seam is at least sealed, albeit… questionably so, with a great besplodging of glue.

But we need to have a look inside. 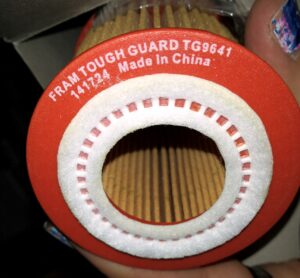 Hey wait WHAT?
First of all, that sealing ring around the edge appears to literally be a heat sealed on piece of kitchen scrubber. It’s got enormous pores and would allow contaminated oil to bypass right through it. Second, do you see the support structure?

There is no support.

Oil flows through the filter from the outside in. Under high RPM operation, it may be presented to the filter media at a pressure of over 100 PSI. In response to this, I suspect this filter would simply cave in. Combine that with the loose fiber issue and this filter may spell death to your engine. A structural failure of the filter would shower paper fibers through the entire engine, where they can clog the fine oil passages to bearings, build up in the variable valve timing system, jam up solenoid valves, and possibly even block the oil pump’s pickup screen. That’s a whole lot of GAME OVER right there.

Well, at least this one only left slight amounts of fiber on my hands, compared to the next model up—

This is supposed to be Fram’s finest. The crem de la…. CRAAAAAAPPPPPPP 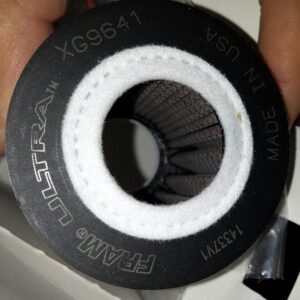 A mesh backs this filter media. It looks a little like the mesh that supports the cotton gauze media on my K&N air filter. The K&N, however, never has to deal with this kind of pressure!!

Royal Purple’s oil filter has a similar mesh as part of its media, however, its media is actually

b) backed up by a metal tube to hold the oil pressure!

Now let’s look at that media— as it RAINS loose fibers all over my hands. 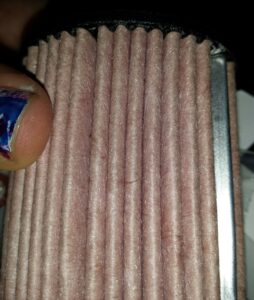 This is Fram’s fancy schmancy “synthetic” media. I guess it’s supposed to be bound together by a resin, but that resin appears to be… just… not cured. Not at all. This filter sheds like our assistant overnight guard at work.

A metal channel is crimped over the seam, and kind of…. rudely crushed at one end. Possible weak spot, as if the media ITSELF isn’t. 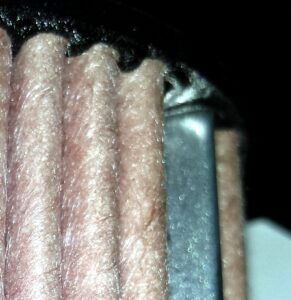 If the other two filters were merely bad, this one… this one is malevolently awful. This one was shedding little dust bunnies of fiber as I handled it. Touching the surface would raise a layer of fibers. Whatever the method used to form and cure the nonwoven fabric media was, it was not done right– resin not cured, insufficient heat/pressure, who knows. It’s a major ugly quality control issue– oh wait, what quality control?

(Note that the manufacturing has been offshored to China since that statement about the quality control was written.)

So, in the case of the two Fram filters, this “quality” is believable. The Motorcraft one is an odd duck though and I honestly suspect a supplier FAKED IT. Here’s why– all of the boxes on the shelf had wear as if they’d been handled, opened, and repacked at some point in time. I have to wonder– were they boxes from factory rejects or overstock that got restuffed with fakes? Dare I say— could their own service centers be involved, saving the retail boxes from filters they install in customers’ cars and repacking them with bulk packed shit filters? This wouldn’t be the first time I’ve seen a lot of defective crap hit shelves at Walmart – I once got burned on an entire purchase of *SIX* SD cards there that turned out to be genuine yet defective repackaged Sandisk products.

They also had some filters from K&N and Bosch there. The Bosch filters, as I recall, are Champion Labs “Performance” line filters and they looked just fine.

The K&N’s– they were the “Pro Series” being sold at the HP series’ prices. See this image for why the HP series rules. Not only does it have better filter media inside, but you don’t need an oil filter wrench to install and remove it. The “Pro Series” are just the ‘Performance’ model Champion Labs filter with the K&N name stamped on it and a higher price tag. This same filter element is used in ACDelco OEM filters.

In short, do not buy a Fram filter or any oil filter from Walmart unless you really want an excuse to do a full engine teardown and overhaul. And if you want a K&N, spend the few extra bucks on the HP series. You’ll be glad you did. For all practical purposes though, it’s the same as the Mobil 1 filter with an easy installation/removal tool built in.

7 thoughts on “Filters Of Wal-Mart: Worst. Oil. Filters. EVER.”