Flip dot signs are kinda awesome. They’re sunlight readable, and noisy. You’ve probably seen them in a bus somewhere or other. They usually have neon green or yellow pixels.

Let’s take a look. This is a Luminator GTi series circa 1990. 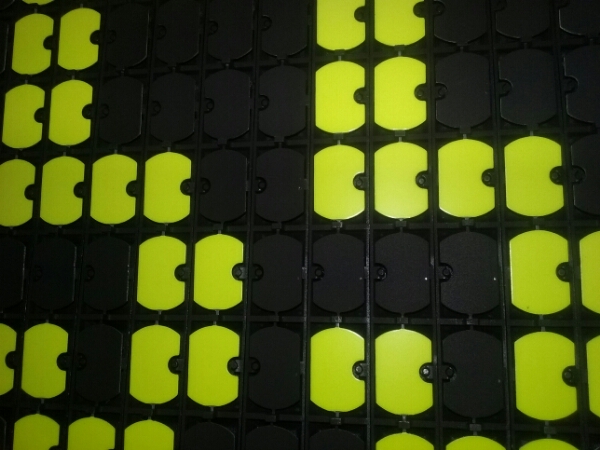 Here are the dots. They’re swiveled by the thin metal prongs on the ends. Note that this sign has a test message left on it, and retains this without power… 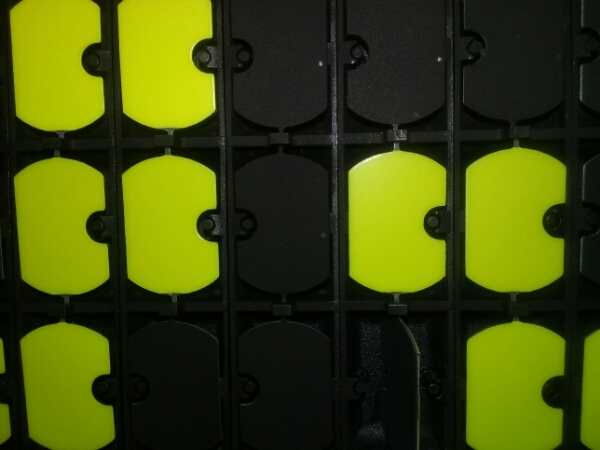 Each dot is a small, magnetized sandwich of metal. Note the small black dot visible through the cutout. This is significant. 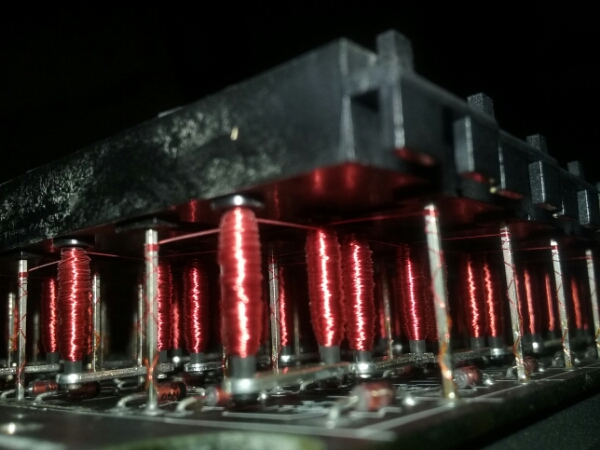 Each pixel sits on a U shaped yoke of metal with a low magnetic coercivity. One side of that yoke is the dot you saw above. 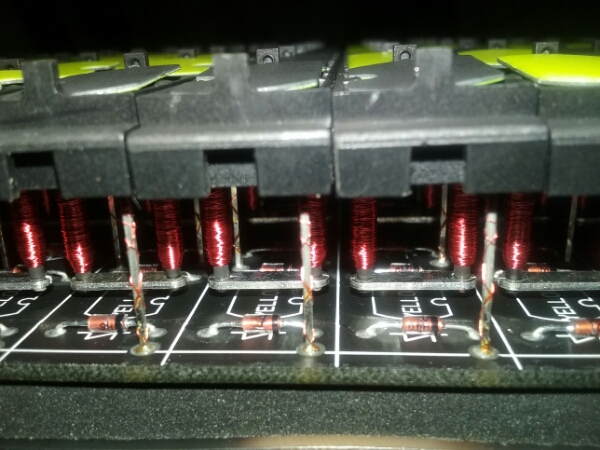 I’ve seen different variants of how the dots are electrically driven. On this one, there is one coil per dot. Other variants I’ve seen used two, one for black and one for yellow (green? white?…) On this one, what you get is a function of the polarity of current applied. 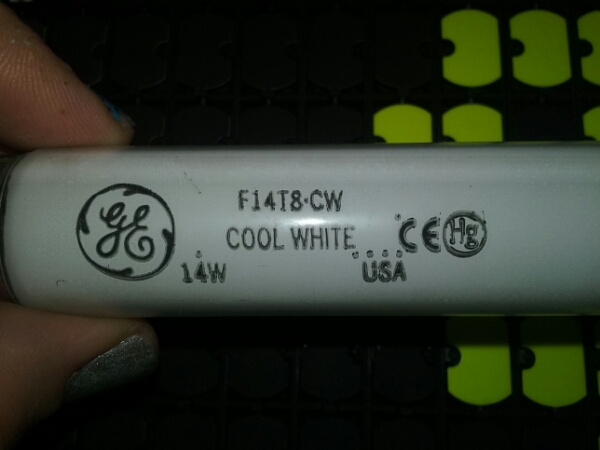 Um, okay, it was 1990, we can forgive this uninspired light source for nighttime use. 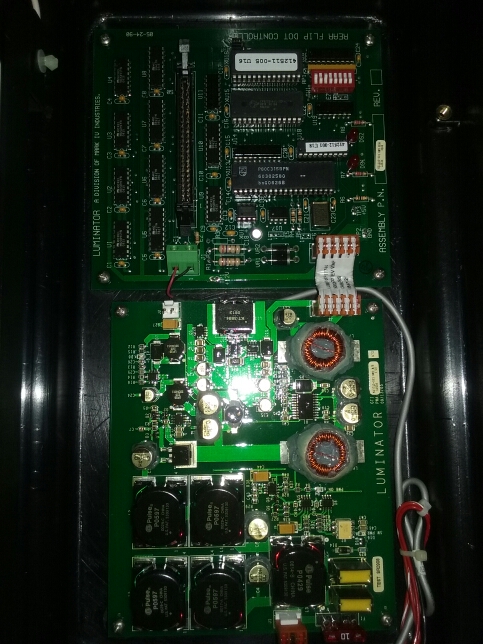 Here’s the driver. Bottom section converts 24vdc to 12 and 5 and also has a switch for that florescent lamp’s power. Top section takes data over RS485 and makes pretty pointillist pictures. 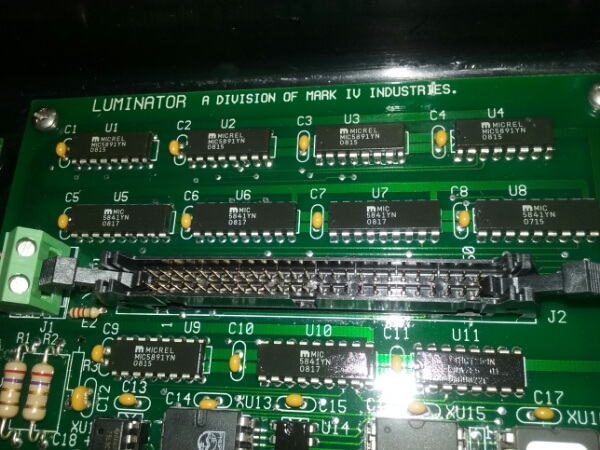 The Micrel chips are shift registers with integrated source and sink drivers. Each row and column appears to be connected, respectively, to a pair of their outputs allowing “push-pull” drive. 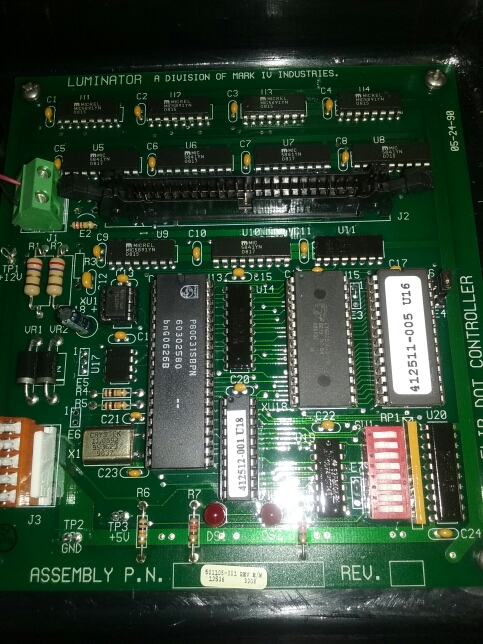 So what can I do with this sign? Right now, nothing. It was made to work with a Luminator master controller that contained all the data to be displayed.

My next step is to try to figure out how to drive the matrix. I’m a little nervous with this one though as it is possible to short +12 to ground by turning on the respective outputs of two of the shift registers that are connected to the same output… However, to flip dots, you have to turn on two shift registers – one for row, one for column. I don’t know which is which and it’ll require analyzing the board layout more to figure it out. My plan is to put about a 25 ohm resistor in series with the +12 line while testing – the dots may not flip like that, but neither will the tops of those cute little driver arrays either. Oh, how I wish they were TPIC6C595 with their short protection. 😉 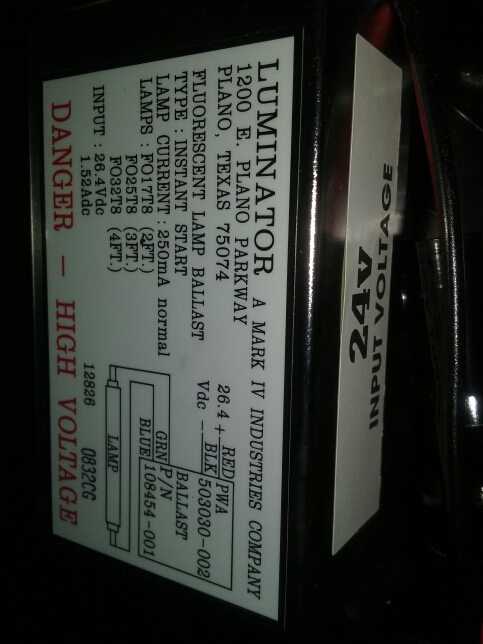 But this thing can take a flying leap. LED tape shall be applied.