As the Miami-Dade County election results trickle in, I noticed an interesting feature to the software used to display them on the website: if you click on Precincts Reporting, it will neatly give you a color map of which precincts voted towards that particular issue.

On a side note, Miami-Dade County is known for having really weird cultural boundaries for no particularly good reason. For an idea of just how strong this effect is, check out Culture Mapped and the Racial Dot Map (kinda coarser data, but you can see the sharp differences between black/white/Hispanic).

Here’s the result of just overlaying two of them: the race for state governor, and Amendment 2 on allowing medical use of marijuana.

Note how closely they correlate. 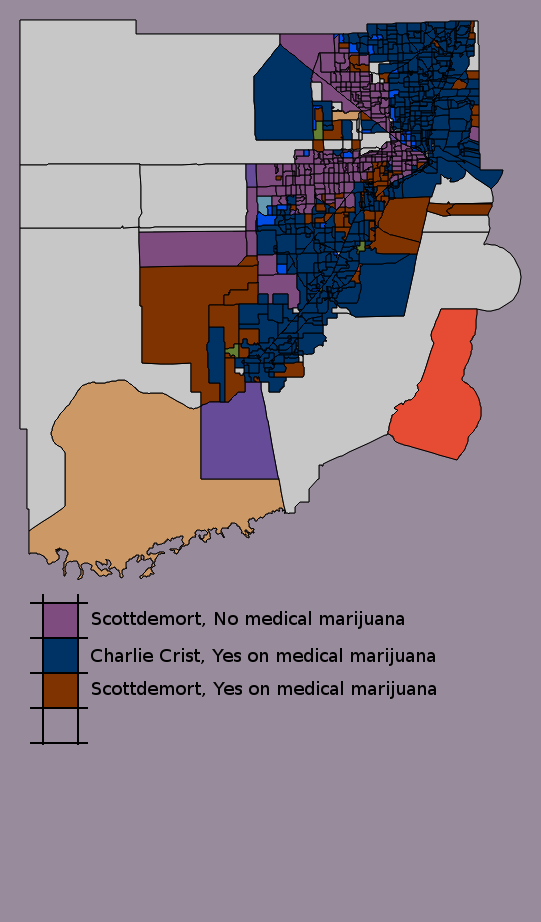 Also note that I did not observe the logical fourth condition shown ANYWHERE – a precinct preferring Charlie Crist but not medical use of marijuana.

The few bright green precincts left appear to be the results of missing data (I did this based mostly on the early voting+absentee ballot data!) and the tan areas are where the medical marijuana issue tied.

Oh yeah, as for why I call him Scottdemort, well, it was better than my other name for him: Dicksnot.