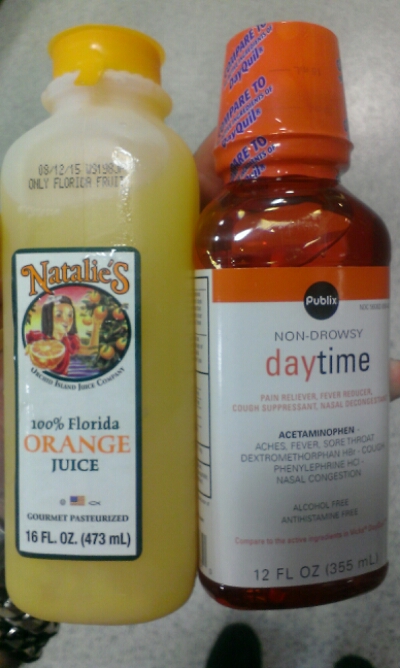 The germs that tend to be carried into the workplace got to me and left me feeling pretty sick today. I needed some cough syrup and decongestant to stop an evil cough, so I rode a freshly decorated Metromover car down to Publix and picked up some supplies.

First, the orange juice. It had a good flavor despite being deoxygenated and reflavored for bottling. It comes out very much like fresh squeezed, with some pulp (don’t forget to shake).

It’s from conventionally grown oranges but comes out fine, I’m pickier about produce being organic on things that don’t have a thick peel that keeps the chemical stew from noticeably absorbing in.

But speaking of chemical stew…

The cough syrup. Oh boy. Where to start.

Opening the bottle revealed a pleasant note of candy canes. So okay, it’s mentholated, but… Bright orange? I knew this wasn’t gonna be the best thing I’d ever tasted, but nothing could prepare me for the 30 milliliters of wack that awaited.

The first thing I noticed was the glaring fake orange flavor. I mean candy like fake orange, like the flavor package they add to Tropicana orange juice… Horribly, questionably, ridiculously bizarre. It’s like oranges in a bad fever dream. I figured, okay, if that’s the worst of it…..

As I ascended the escalator to the Metromover platform, the menthol came back as a burning, infuriating aftertaste that combined with the fake orange, made me shudder. Sure I could feel a pleasant coolness in my irritated throat and sinuses but my taste buds were not happy.

It was like excessively orange Gatorade powder stirred into mint mouthwash and inadvertently chugged at 4 in the morning. It was awful. Upon seeing a fire extinguisher on the wall, I *fondly* remembered the unpleasant salty chalk flavor that you get on your palate after walking into a room where there’s monoammonium phosphate and talc powder hanging in the air from someone discharging a type ABC dry chemical extinguisher. That taste in my memory was preferable.

A train dribbled in there, abruptly hitting the end of its program stop a little too hot and thudding to a stop. I got aboard and inadvertently stepped into another passenger’s basket of tennis balls, each monogrammed with his initials. I tried to apologize but just gagged.

At the next station I all but fell out of the Bombardier CX-100 in a coughing fit and spit a ball of neon orange gunk into the trash can. I don’t know if this was the intent and design of this evil liquid but all the gunk had been purged from my nose, throat, and probably gray matter as well. It worked, in mere minutes. Took my mind right off the cold or whatever it is.

I’m not looking forward to another dose in four hours. 😉