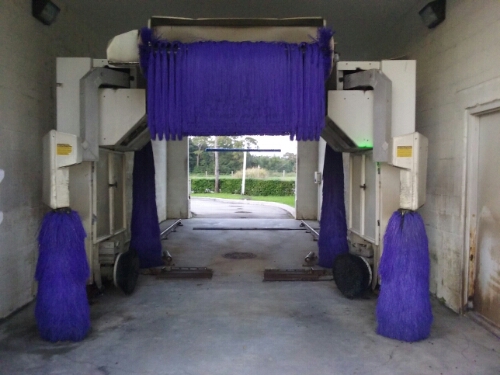 Here’s a several hundred pound portion of pure 1990s ridiculousness. It’s a Ryko Voyager II car wash. Something is badly wrong with the wheel scrubber on the left side (right of this picture) but it’s in otherwise great shape. The nylon filament brushes are kinda out of favor but they can be easily changed out.

It’s probably really lightly used though. It’s in the middle of nowhere.

The current model, Softgloss Maxx, I’ve seen some of those go to the scrap heap after three years of use. That’s just not a great thing to do to someone who’s invested a couple hundred grand in a wash.

So that, if you’re wondering, is why you still see so many of these older Ryko car washes being moved around, rebuilt, and kept in service everywhere.

If you use a Softgloss maxx and look up in the gantry, there may be a pair of nozzles on a weird gimbal structure that lets the machine rinse under a hatchback car or SUV’s air deflector. This was actually my idea and I gave it to their hopefully former director of R&D so he would shut up and leave me alone one day. Good times…

What ever happened to them making actually good systems? Well, I get the feeling that dude was in a good part responsible, he was very fond of the idea of making the machines wear out over time and even the idea of software as a service to the wash PLCs. You keep paying for a service or you’re stuck with a bay full of stationary plastic.

Back in the 90s, though, stuff was still built to last.

Such is, sadly, the modern American way. Le siiiigh