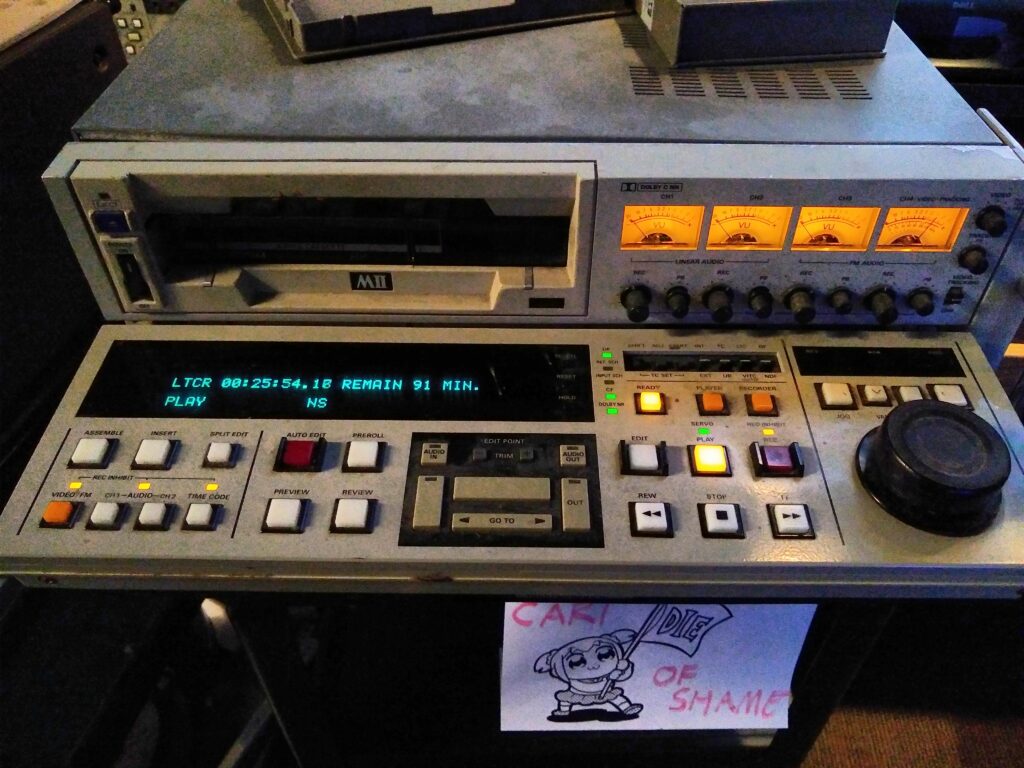 By 1990 it was all but entirely gone, a commercial flop, guilty of trashing so much footage entrusted in it with massive tape dropouts.

It’s bizarre. It uses cartridges that look a lot like VHS, and it’s in fact possible to stick a VHS tape into the MII deck— and get it jammed there because it’s not exactly compatible with the loading ‘elevator’ and tape transport. It’s actually kinda more like S-VHS, but… terrible.

Apparently my station is lucky enough to have been one of the few that used the format for a while, and still has one working deck to access video on it.

The only thing I like about it is that this deck has a really cool display and the firmware will actually report to you in plain English when something’s wrong. It also uses the same reel speed ratio trick to tell you approximately how much tape is left, which Sony has had on pretty much…. every one of their professional formats, ever, so that’s nothing special, but it’s cool that it stays on the display all the time. In the photo below of the transport, you can see a roller to the left of the yellow cadmium plated elevator motor. It’s got a slotted encoder on its base that lets the deck sense the actual tape travel speed for this calculation. Interestingly, this one also leaves the tape threaded in fast forward and rewind, so you can see the timecode spin away, but on a fresh unused tape that’s never been “blacked” or used before, these sensors are the only way it’d be able to calculate the time remaining.

I’m suspecting that’s a 40×2 char VFD under the plastic there. 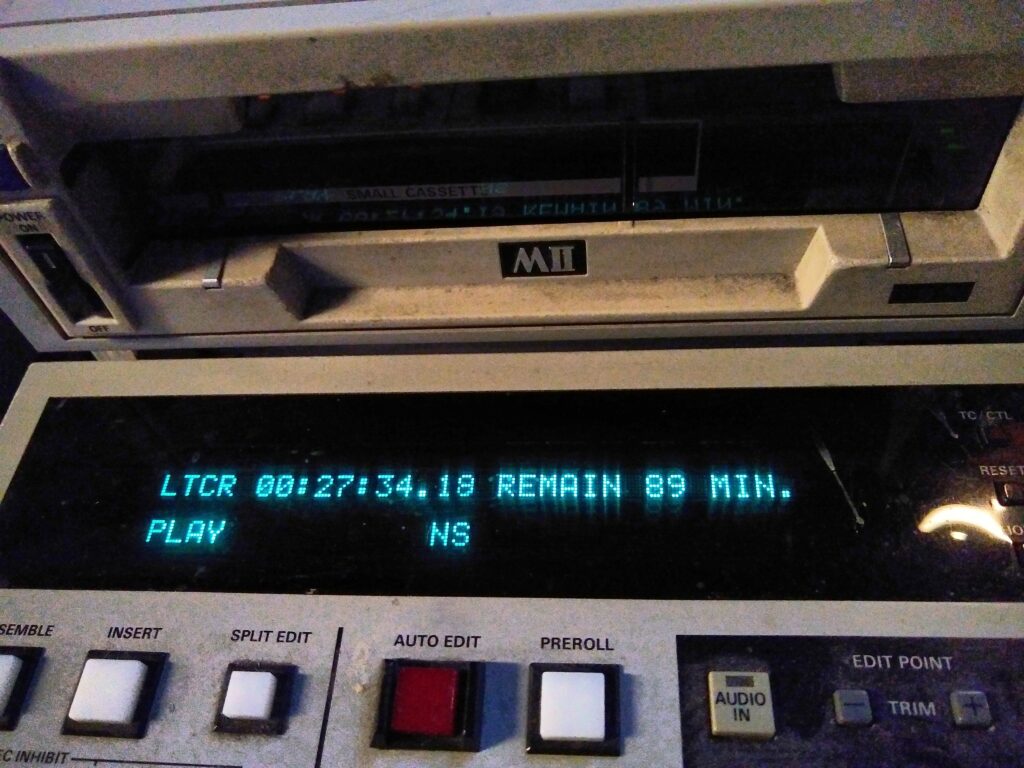 When I first got the deck powered up, it said “ERROR: LOADING MOTOR” or something along those lines, because the threading ring motor’s belt had lost its elasticity and grip. I was lucky enough to still have a couple of belts that fit it.

Yes, it’s got a VHS looking cartridge and a threading ring……. believe it or not that’s not the only time that nonsense has happened, there was actually a VHS transport that threaded up that way. Oh, you’d think with a name like “MII” it would use M-shaped threading like a VHS, DVCAM, or DVCPRO transport, but that wouldn’t have been AWFUL enough.

See that spinning thimble to the left of the head drum in this photo? That’s the top of the capstan. That’s the only other thing I LIKE about this powerfully cursed device: you can hold an isopropyl alcohol soaked shop towel against the capstan and turn the thimble to scrub the crappy oxide off it.

It’s got two linear audio tracks (like standard VHS) and two FM multiplexed helical scan audio tracks (like Hi-Fi VHS) – channels 1 and 2 are linear, 3 and 4 are helical. It’s like someone decided to use the worst of both worlds. Fabulous.

So if you’re wondering why I love this thing enough to have put the little drawing of Popuko on it, this deck also has the nastiest weak rack slides accompanying it, which broke and turned into a horrible ski jump while I was trying to pull the deck out of the rack to clean its heads. I was sitting on the floor and all 80 pounds or so of the thing came flying out, landed on my lap, arm, and leg, and generally left me wanting to yeet it off the roof. I’ve never had a rack slide fail in the same way these did— the mounting ears just snapped off at the screw holes like some kinda Twix bar.

It will now remain on the CART OF SHAME until it’s eventually fecking e-wasted where it belonged in the first place.

I wonder just why Panasonic even bothered with this. Everything about the system feels like they had intended to be able to create a competitor to Betacam SP that would have had a higher profit margin, BUT—- then they took every step possible to make the damn thing insanely complex and difficult to produce ????