Boy, was I ever young and stupid. It was the summer of 2004 or so, and various Chinese electronics vendors were just starting to flood the US market with some really cool looking toys, and the quality hadn’t faded to zero on them yet either! Mostly….?

At the time I’d just gone through a big mess with most of my workshop having been left out in the rain for several days in my absence, so I didn’t have a power supply. I bought this Yihua YH-305D on eBay and thought it was pretty great for the price, even after it arrived with the instruction manual calling it a “DC POWRE SUPPY” and the plastic nuts on the front panel binding posts don’t actually… work. (I got around this using banana plug leads.)

Years later it finally occurred to me to be suspicious of the fact that the constant current regulation is sloppy as hell, and the cooling fan starts to run if you draw more than one amp off it continuously. At five amps steady draw, the Powre Suppy doesn’t get noticeably warm, but the fan continues to howl forever.

I opened it and realized just how misspent my youth truly was. 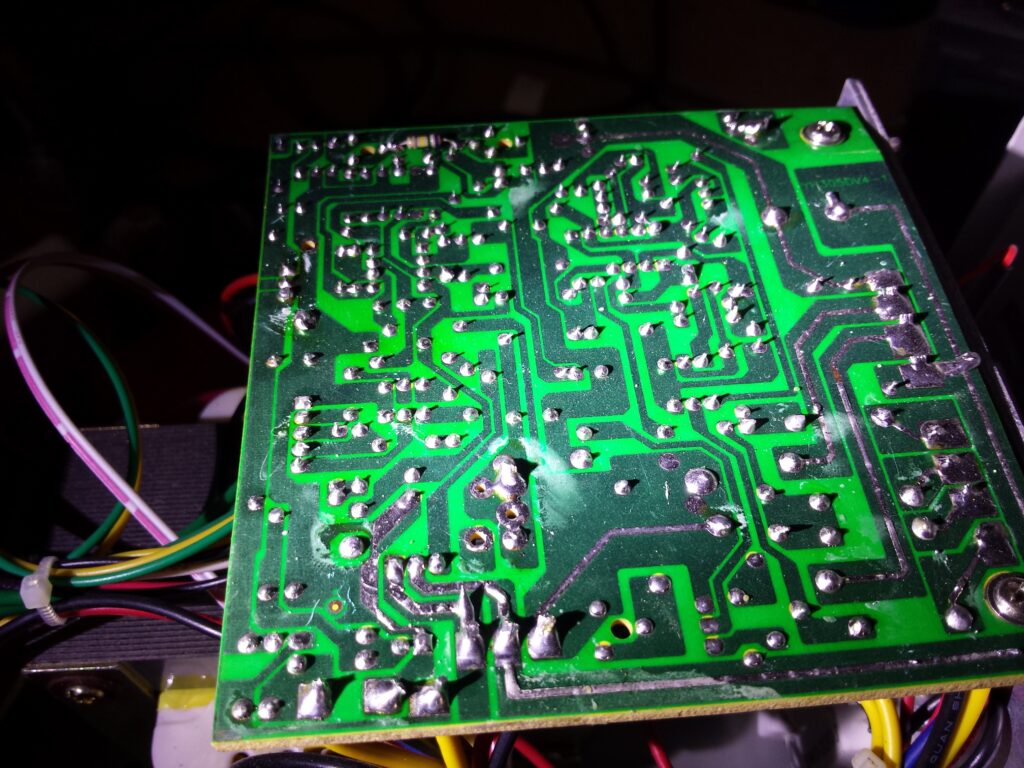 This… beautiful… board greeted me right away. There are places where traces kinda got half etched over there on the side then subsequently, but incompletely, covered with solder to fix it. Ummmmmmmm yeeeeeaaaaah D- 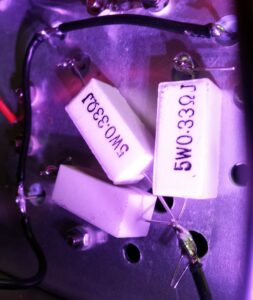 The underside of the regulator pass transistor assembly. That’s three *supposed* 2N3055 transistors, paralleled. Why would you need three 2N3055’s for five amps?? You can run 15 amps through ONE real 2N3055 if it’s heatsinked properly. Oh wait, I forgot the key word… real. Genuine. Official. Not Pure Unadulterated Chineseium. I couldn’t get a picture of the labels on these “2N3055” transistors that were SO GOOD that they had to put three in parallel to pass 5 amps, but I was able to get a peek at it and they were printed in a gray looking ink with a nonsense logo– it looked like the Marvell Semiconductors logo??!! Either way, this video details what I’m probably actually looking at and why they are… very… very… derated.

The heatsink they are bolted to also explains the fan behavior. It’s nothing more than a flat plate with very little mass and surface area.

The fan sucks up air from right above it and exhausts it out the back when the thermal switch seen in the background snaps on. I’m not sure how hot it has to get to trigger that, but it sure gets there in no time. 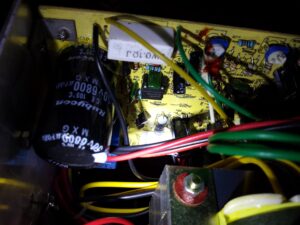 The main filter capacitor looks underwhelming and I have my doubts it’s actually a Rubycon as its clothing would suggest.

This is paired to, uhhh, the death capacitor, as I lovingly call it. If you are using a power supply like this as a limited current source and you lose connection to the load momentarily, and the voltage limit is significantly higher than the voltage the load pulls it down to, any capacitor on the output will be charged up to that level. Once connection is reestablished to the load, it is presented with very high available current at this higher voltage. I detonated some high efficiency white LEDs under test with a power supply like this years ago while trying to develop a boost converter based driver for solar lighting applications and was royally pissed. So, without further ado, the death cap…

and…. the… rubber cement disaster of the century. The entire front of the supply is just…… bespooged with this cement…. Another red cement is found splattered all over the place as well. At left in the above picture is the digital meter board which I am not even going to touch let alone try to calibrate the screwed up zero point on, FORGET THIS 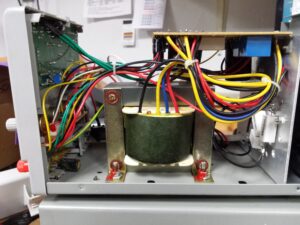 The board is supported only by one small bracket from the rear; if I drop this power supply it will experience the sweet release of death it so sorely longs for.

Yeah. I was young and stupid and I bought this.

There’s a great thread on EEVBlog’s forum about these, including the wonderful thing that happens when you switch one on and it goes wham, overshoot, boing, boing, boing, and either stops bouncing or… not…