Updated: Do not, for the love of cheeeeze, bump this thing while it’s running or it will throw a big scary blue screen NMI / parity check error and scare you to the very core of your being 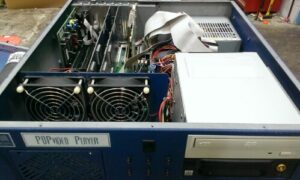 Well well well, would you look what tripped and fell on its face today? This is an old Visual Circuits POPVideo Player, from the late 1990s. Amazingly, the only problem here was a bad power supply.

But let’s look inside, because, oh man, this thing should be a computing history museum piece.

The year was 1990-something. People were still dancing the Macarena everywhere. Grunge rock was still going strong, accompanied by some pretty nice sort of folk music, a lot having female vocalists and very little Studio Magic. Digital signage was just starting to really catch on and replace static signage in advertising and the like, using CRT televisions or video projectors… and the Pop Video Player was ready and willing to drive this.

The features: Hard disk video storage of MPEG-2 content… updatable via changing the removable hard drive out, or over IP via modem (!!!) or Ethernet interface. Windows NT 3.51 or 4.00 (hurrrrk!) based machine on an AMD K6-2 at 200 mhz…

Needless to say, a PC of this thing’s stature would have trouble playing any sort of video, so it’s got some custom hardware. Special cards with four MPEG-2 decoder ASICs, audio codecs, and framebuffers with S-Video and composite outputs were used. The software then only has to fill the buffers on each of the MPEG-2 decoders and respond to control commands which could be sent in by serial port (possibly over IP?).

And here we go on the magical history tour. 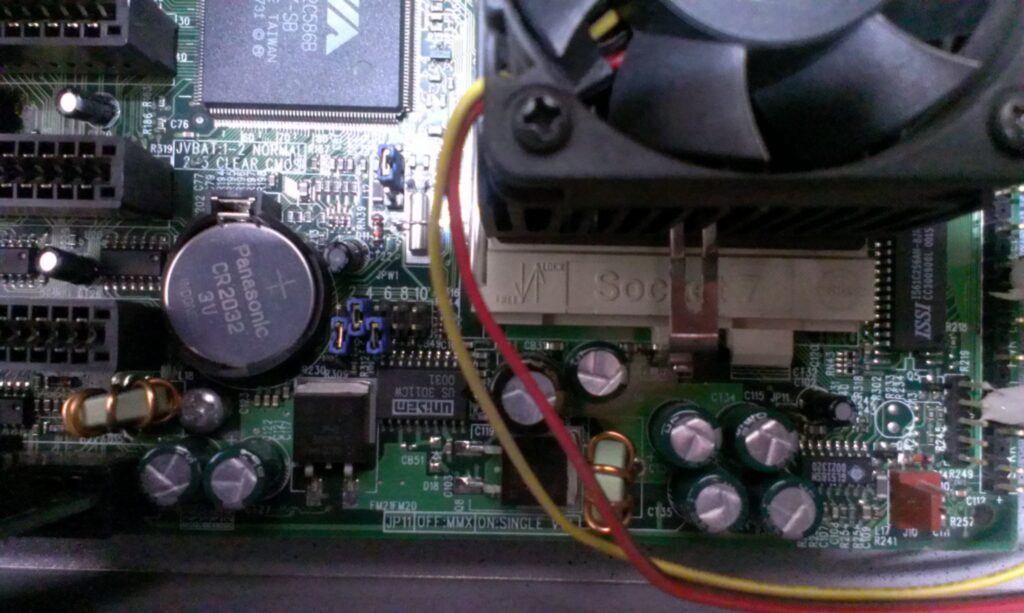 Socket 7. ISA slots visible at left. The Tyan motherboard (designed in the USA!) has ISA, PCI, and AGP… on an AT form factor board…!!! 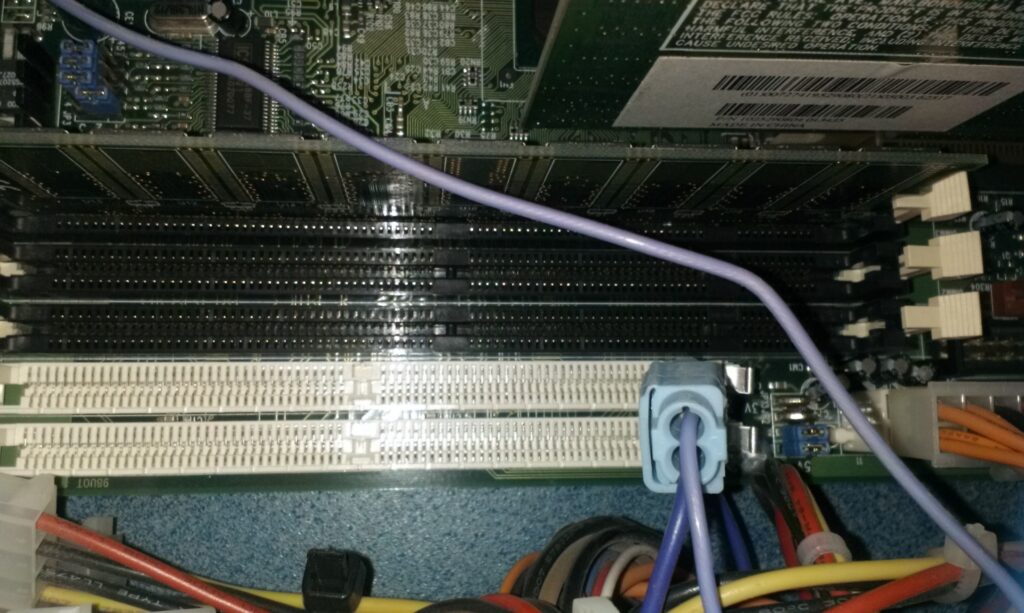 Old school RAM. This board supports 66 and 100 mhz SDRAM; the fastest front side bus frequency available on Socket 7 was 100 megacycles. Socket 7 was kind of cool as multiple CPU vendors could use it. The downside of course was that it started to eventually hold the industry back a bit, so it was replaced by vendor specific CPU interfaces (Socket 370 and Slot A were the next ones up, with Slot A using the double data rate RAM that has become very much standard nowadays). The white slots are for old 33 mhz 72-pin SIMM memory. Using those puts a TIIINY bottleneck on your memory bandwidth, but RAM was still expensive around then due to a few oddball industry factors… not the least of which were price-fixing… and people saved their RAM across upgrades. The spliced purple +5VSB wire goes to the board below: 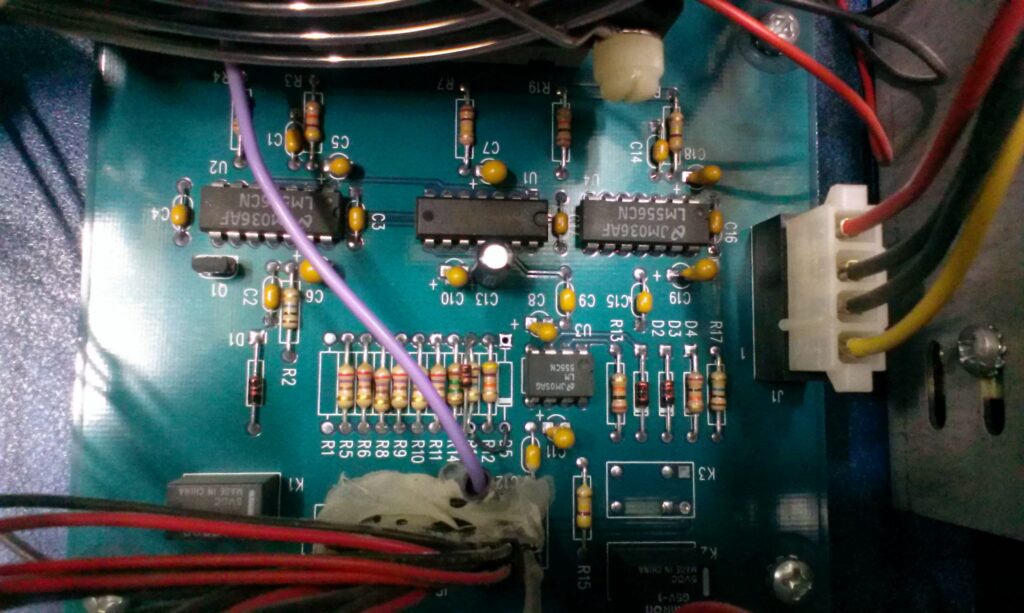 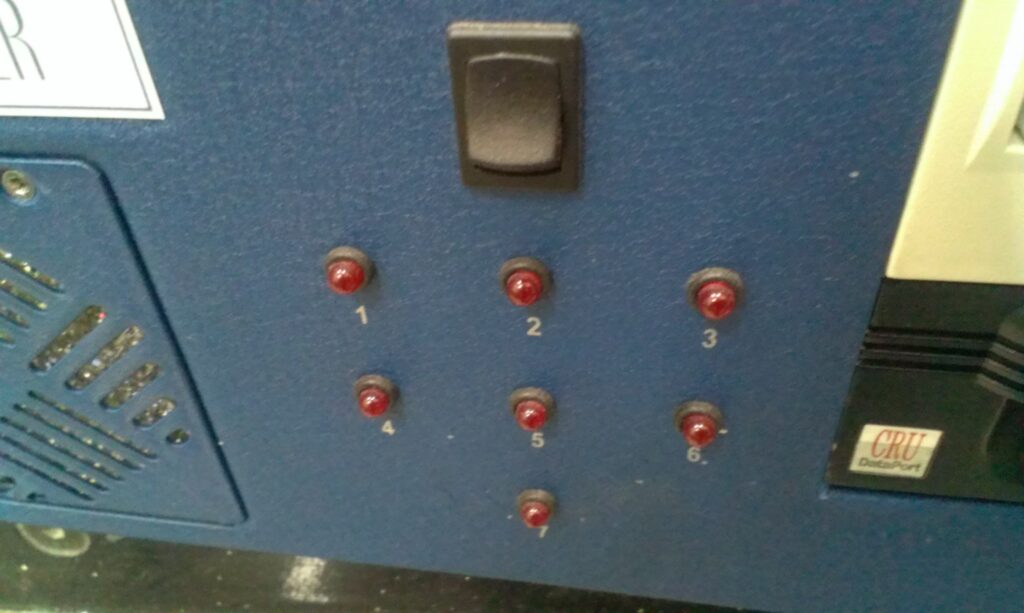 This oddball board handles displaying status information and, best I can tell, is a workaround for the fact that Windows NT never supported ACPI. See, the Tyan motherboard is an AT form factor board (WITH AGP???) and the AT form factor systems never had soft-controlled power on/off. The purple wire is +5VSB, 5 volt standby power that comes on the moment the PSU is plugged into the wall. When +5VSB is received, this card also throws the relay to turn on the machine via the motherboard’s power switch input. It can also turn it back off again. On a modern PC, an ACPI call is made to the BIOS to switch power off once the OS is safely shut down. On this one… well, it’s sillier. A custom driver(?) is used and that board is interfaced to the onboard PARALLEL PORT! Once the OS is shut down safely, it toggles a parallel port line that cuts the power after some number of seconds.

And now, the big guns. 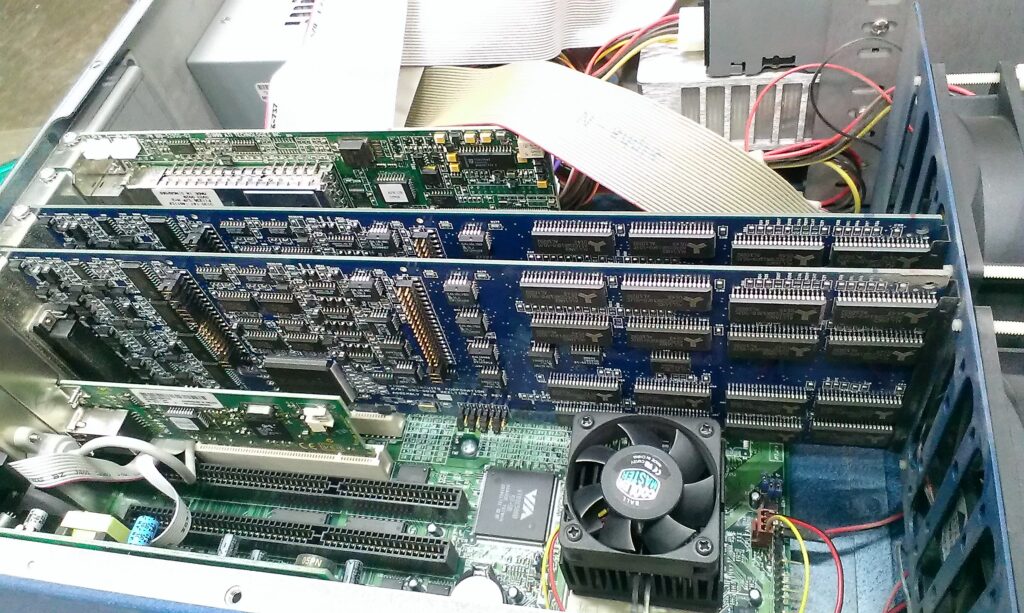 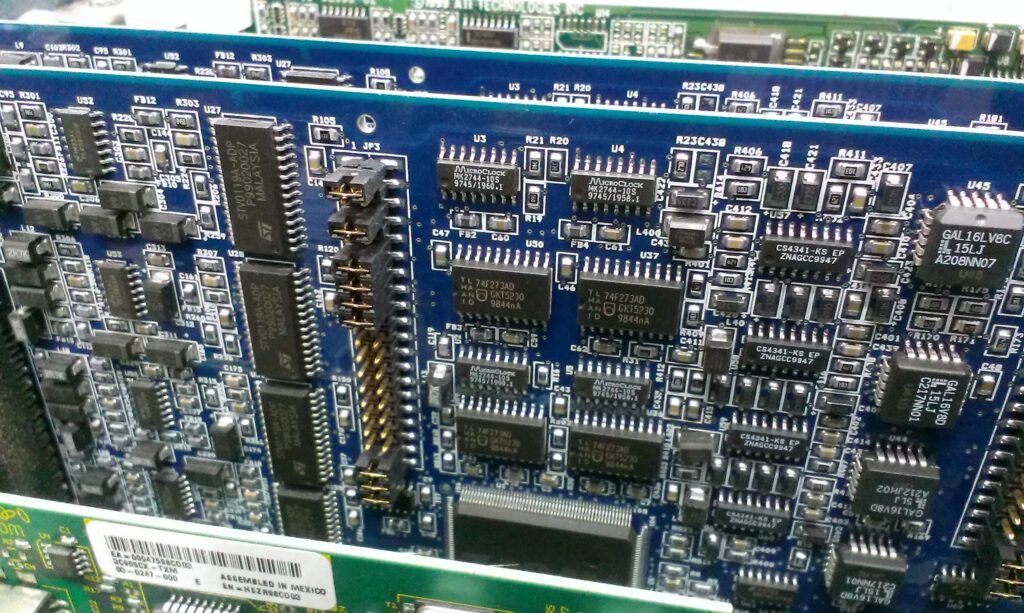 Audio and video output sections. I don’t know how to eyeball read the video section but the audio section is Crystal Semiconductor PCM codecs, some kind of Lattice GAL devices used as ‘glue’. Crystal Semiconductor is now part of Cirrus Logic who now make AMAZING high quality audio ICs among other things. Back in the late 90s? Cirrus Logic was better known for lackluster video chips. Funny how that worked out.

Also, back then Realtek made supremely awful video chips, and now they make amazing wireless/wired networking chips. You live, you learn, you grow… 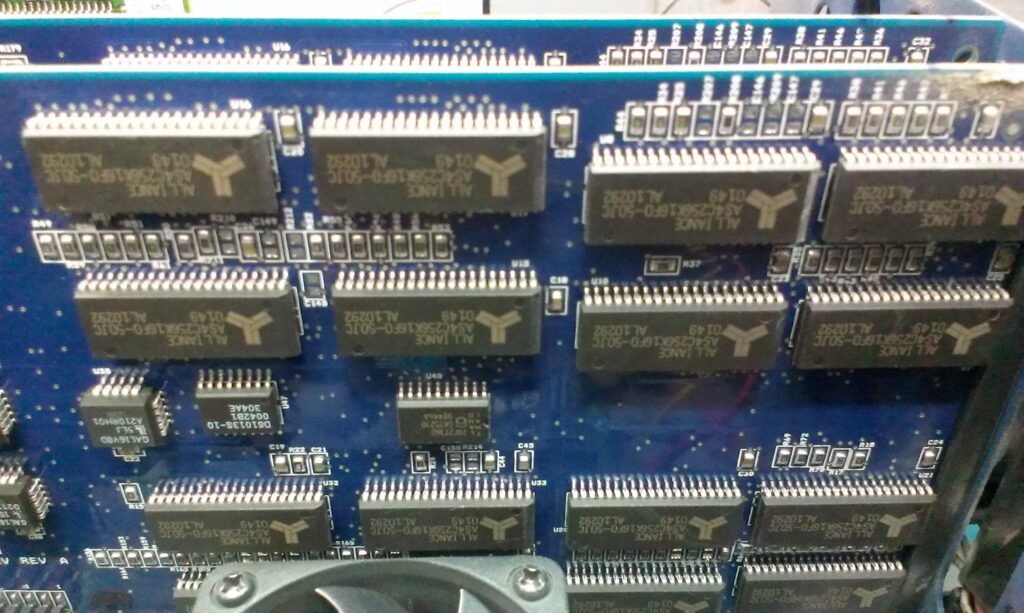 The buffer that’s loaded by the video playback software 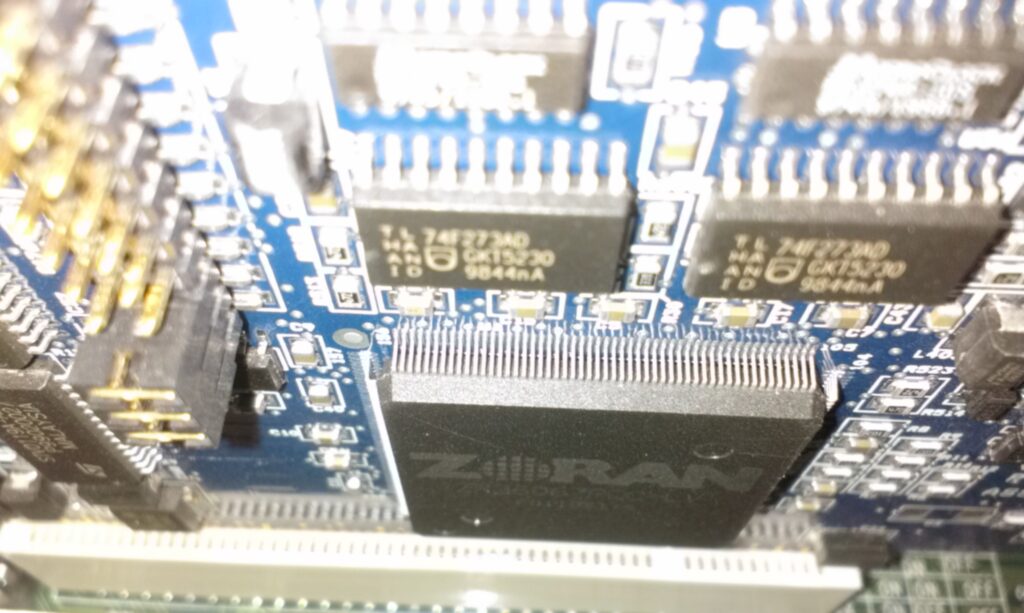 Zoran multimedia processor, it slices, it dices, it demultiplexes, it timecodes… 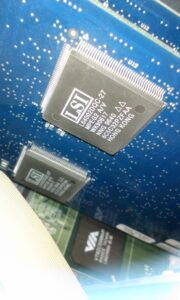 These do the heavy lifting on light power. 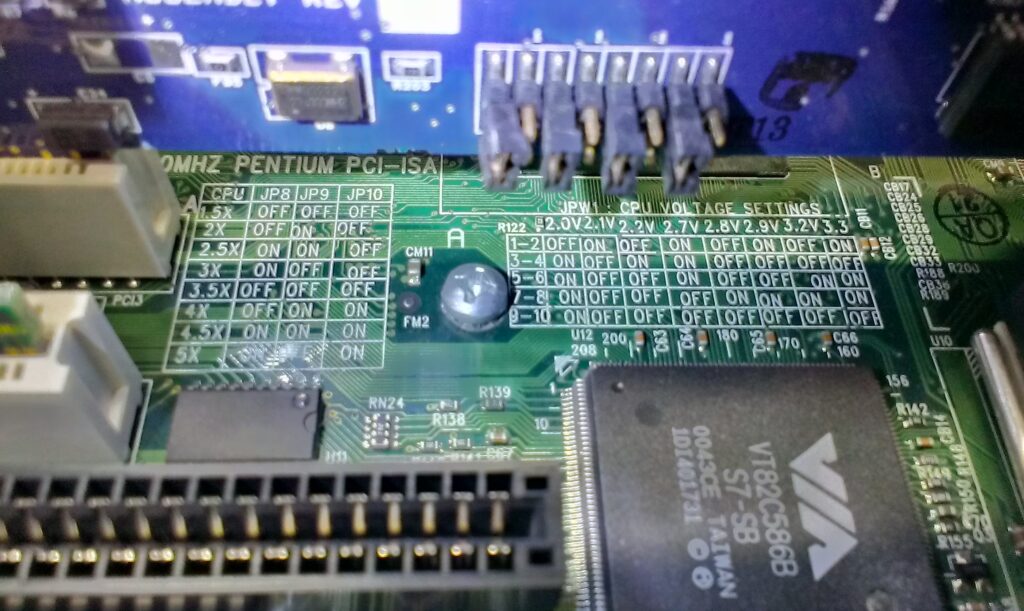 On a side note, remember THIS about Socket 7? There was no CPU or voltage autodetection and since different vendors made different chips all over the place for it, WELL THEN. You got to play Connect Four with jumpers. 😀
Also I guess this was back when VIA knew how to make a motherboard chipset that didn’t constantly fling poo.