Quest Diagnostics is the least professional corporation I have ever had the misfortune to deal with. Oh, by the way, quest.. I want you to read this post, and I will not remove it.

I arrive at the testing center to find it closed with a note on the door indicating they shut down for training at 1 PM. The note had an 800 number, the location of another testing center at 170th street, and a pencilled note “most unprofessional lab ever”. Buuuuuuurn. 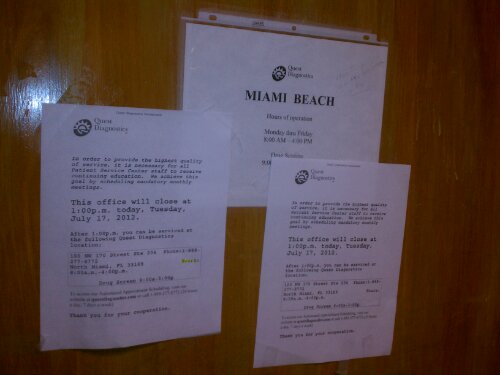 I called the 800 number only to be given a line for a BROKEN IVR scheduling service. This IVR had no option to connect to an operator and simply referred me to questdiagnostics.cok. While waiting for another bus*, I checked my previous appointment in their web based scheduler. Gone without a trace. Poof.

It was, however, able to give me a new appointment for a testing center near Dadeland South station, so I requested that. The confirmation page gave me a different 800 number so I hammered its IVR until it gave me an OPERATOR QUEUE! Advertisements rattled off for test services that’d only make sense to medical specialists until I got a person on the line. I asked if it was possible to call ahead to the testing center since this was my last shot at being able to piss in their Magical Science Cup within the allotted time period and was informed that this is impossible.

They literally don’t have a phone. I even found a big clinic list that was posted on an HMO’s website and that had the 800 number for all of them.

I very politely confirmed my appointment with her, she said it’d be fine as long as I can get in by 3:30 pm. The hours listed say until 3, I don’t know who to believe. She confirmed they are one of the few centers in the Miami area that can do the drug test.

I politely asked that she register my complaints. She said the local office was supposed to post a note on their door, which they had, but that doesn’t help anyone who scheduled through the Quest web site.

In summary, Fuck you, Quest Diagnostics. Go jump off the floating piss cup you came in here on. DIAF. Fail fail fail. I really hope you do not cost me the opportunity at what will probably be the best job I’ve ever had.