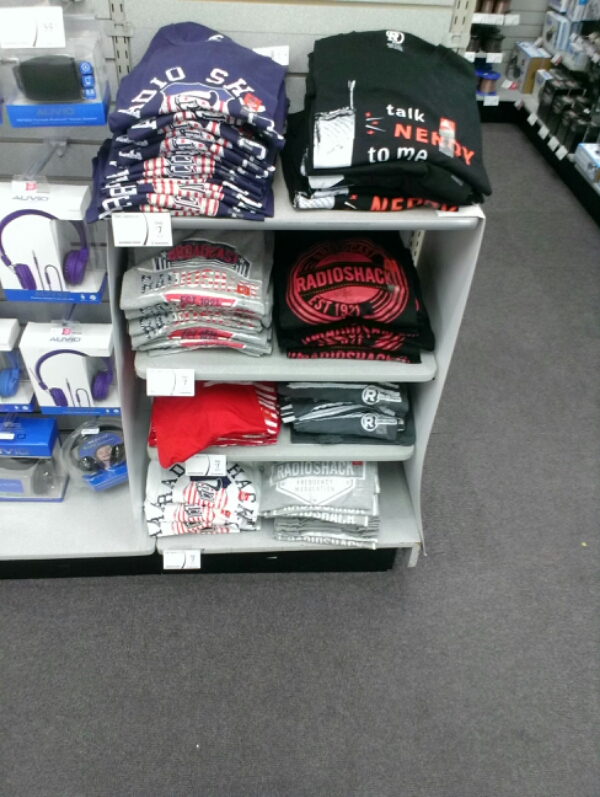 What you are looking at is the prime endcap space in the middle of my local RadioShack store.

Years ago, this would have been occupied by a home theater system, high end stereo, or something that someone would have actually bought, and it would have made the salesperson who helped them with the transaction a good amount on commission.

Radio Shack is not much longer for this world. They’ve been my go to place when I need a connector or some simple part on short notice, but I don’t think they’re going to be there for me much longer.

They’re the last venture of the Tandy Corporation, which renamed itself to Radio Shack. Tandy Corporation has engaged in many potentially successful ventures over the years, yet methodically run every single one of them into the ground in flames. Some that come to mind, of course, were Incredible Universe, the Tandy Computer brand, TechAmerica, and Computer City.

I used to love Radio Shack in the late 80s through mid to late 90s. They used to have a lot of components and supplies for my tinkering, and it was with the assistance of a Technician class study guide that I purchased at a Radio Shack in 1999 that I got my ham radio license. Back then they still even carried some ham radio equipment in their stores. I remember they still had the HTX-202/404 brick handhelds in their stores, and a 2 meter mobile radio, along with some Vectronics stuff (was this before or after they were part of MFJ Enterprises?). TechAmerica, a mail order only venture (as far as I know) had even more ham gear available when they were around.

What they didn’t have in their stores, they had available in a 200+ page catalog, available for shipment straight to you or to your local store.

In the late 1990s they started to lose focus on what their core business should be. They began to heavily push cell phones, then gradually cut more and more into their retail planograms* to devote more space to cell phones. Eventually, half the store was occupied by cell phones and accessories. Components were pushed back into organizer drawers in one back aisle. They stopped carrying home theater and stereo gear entirely as of about 2010, instead just focusing on low ticket items and cell phones. The commission based sales model would have seriously stopped working for their employees at this point in time, as there’s no longer such a thing as making a $50 commission on the sale of a $500 TV, for instance…

Now, today, I walked into one of their stores and this was in the middle. The cell phone display was pushed against a wall – there’s a good chance they haven’t sold a phone in quite a while, especially since their prices (up front or hidden!) are not competitive with other retail outlets or buying directly from the carriers.

At some point they did make an effort to reconnect with the electronic hobbyist and education markets, but it was all too little, too late. A line of kits they worked on in conjunction with Make Magazine got liquidated en masse at clearance prices…. then promptly reordered. They also carry a number of Seeed Studio kits and boards, but haven’t made any effort to promote this; they are merely just… there.

Despite the large uptick in interest in ham radio, they have not re-entered this market. They don’t even sell TV antennas for those who want to hook up their television sets for over the air programming.

This of course leaves a space for other businesses to fill. Systemax/TigerDirect is now starting to carry electronic kits in their stores. Who knows, maybe you’ll be able to get an oscilloscope there too, just like you can at a Fry’s. Alfa Electronics has been doing great business at their two store locations, and one of my fellow broadcast nerds has started doing some electronic parts sales from his business, Smiling Dog Systems.

It’s just a shame about Radio Shack. The mighty have truly fallen.

4 thoughts on “Radio Shack has lost it…”