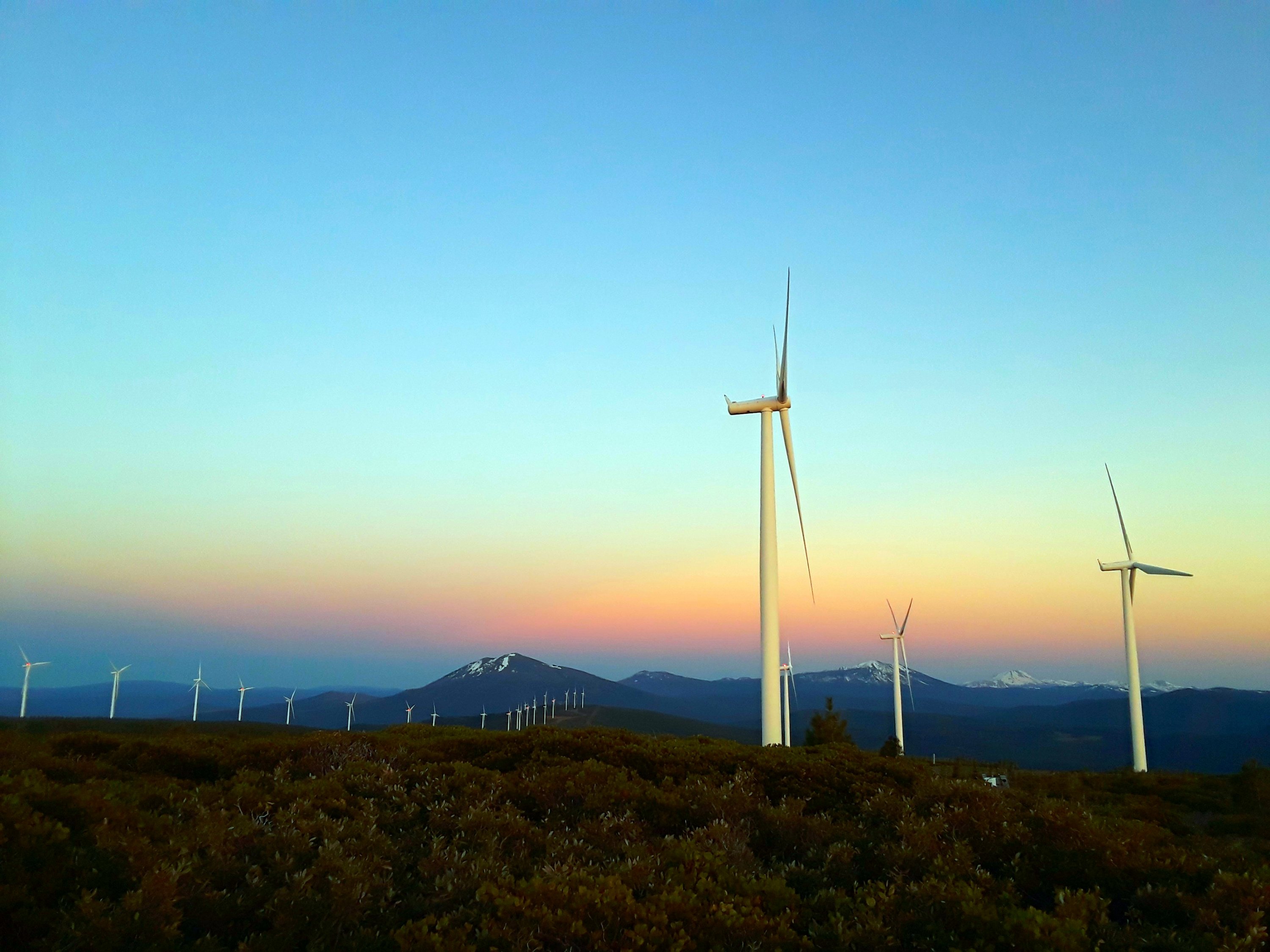 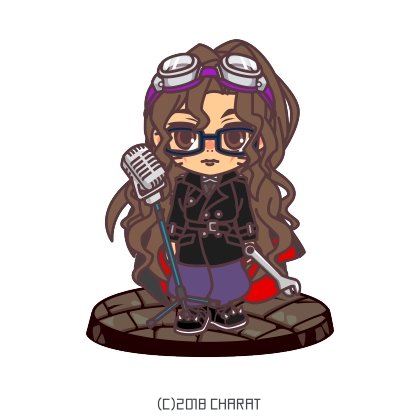 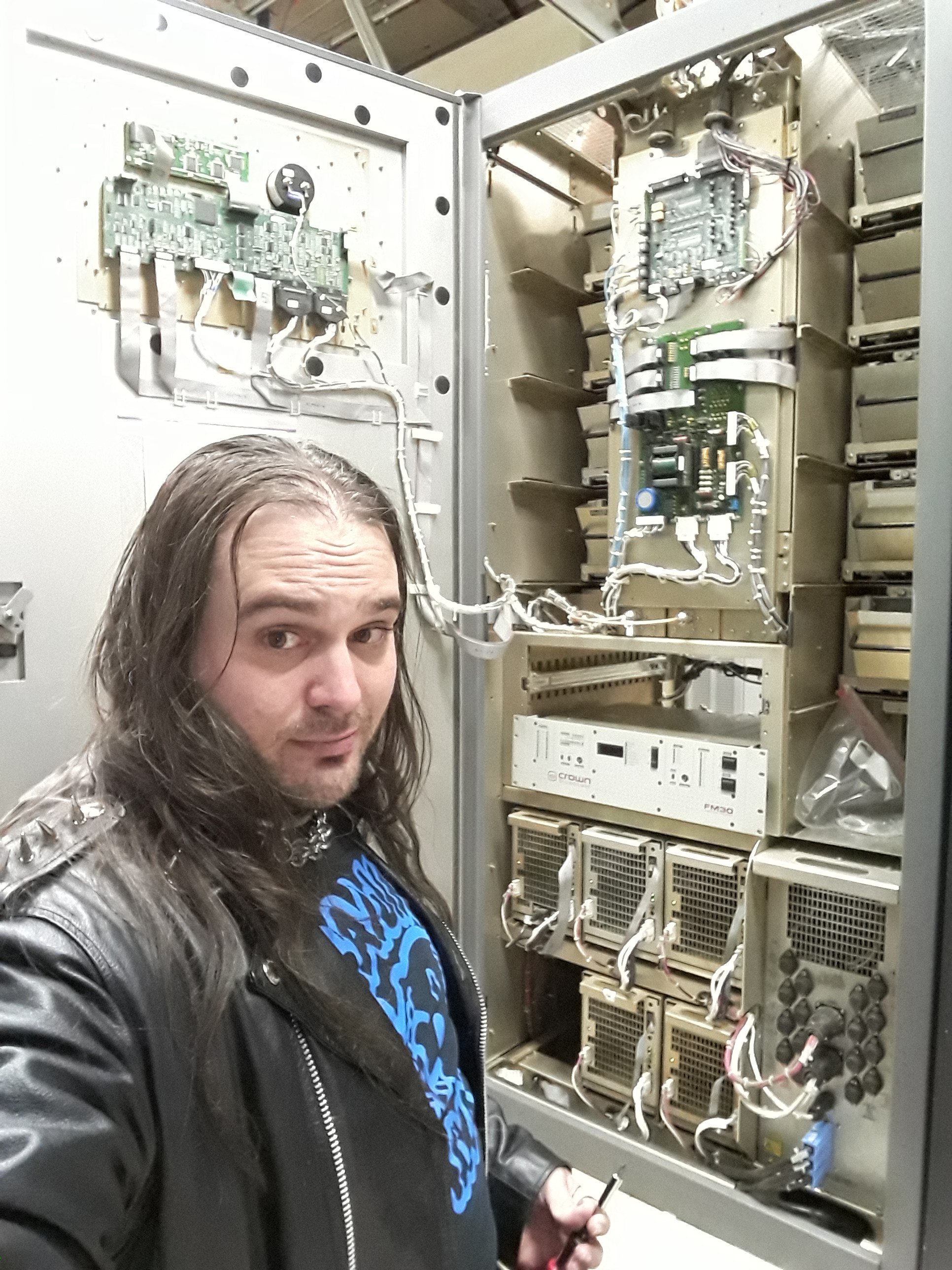 What am I doing Crownin’ around up there? 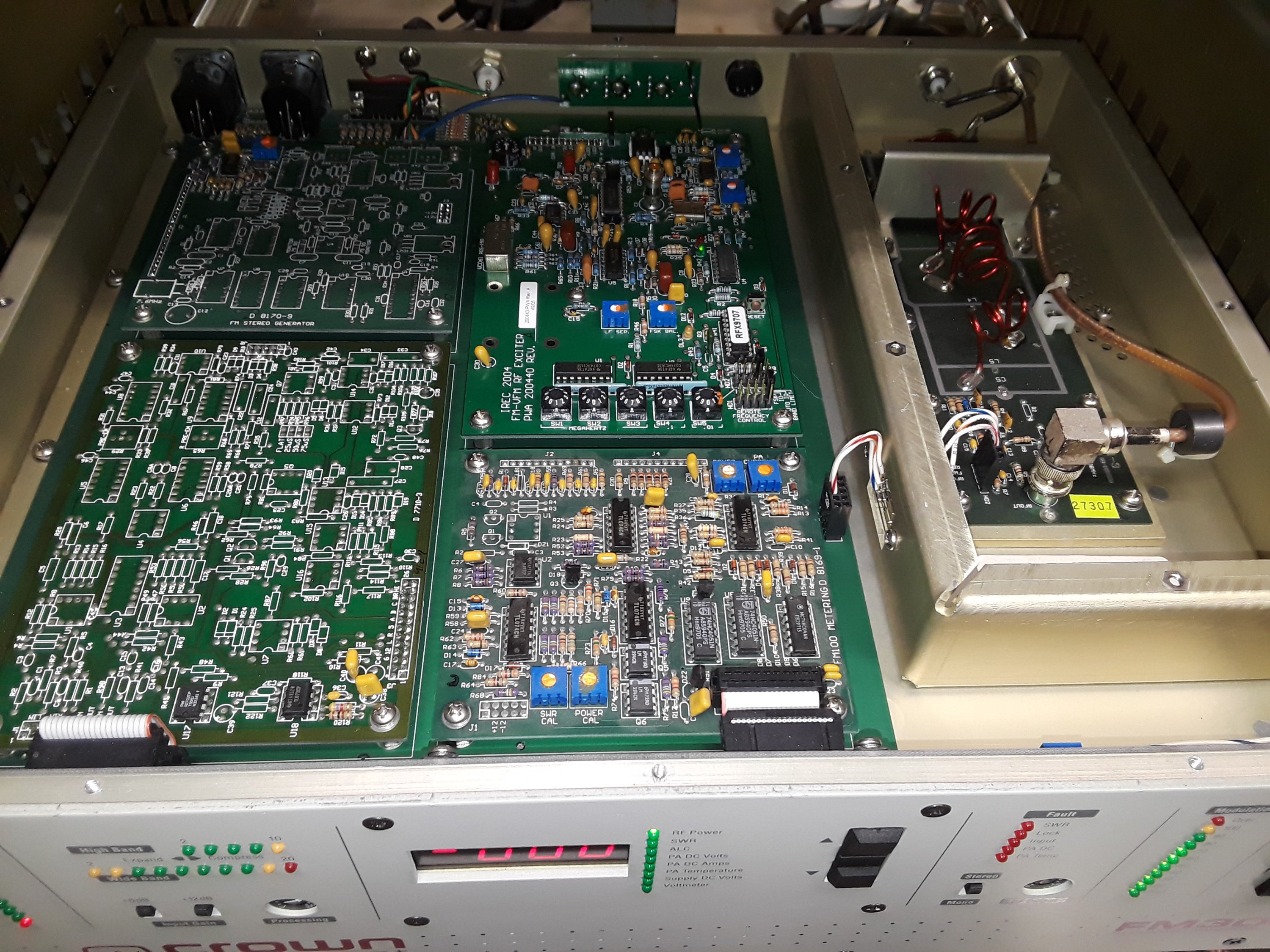 Pretty early version of the Crown. Note the two mostly unpopulated dummy cards at left. Newer models just have jumpers for when you’re not using the onboard receiver or stereo generator/audio processor. See those two op-amps off in the corner? Hee hee… Bufferin’ like a boss. I’m including a color enhanced detail of that metering card because…. 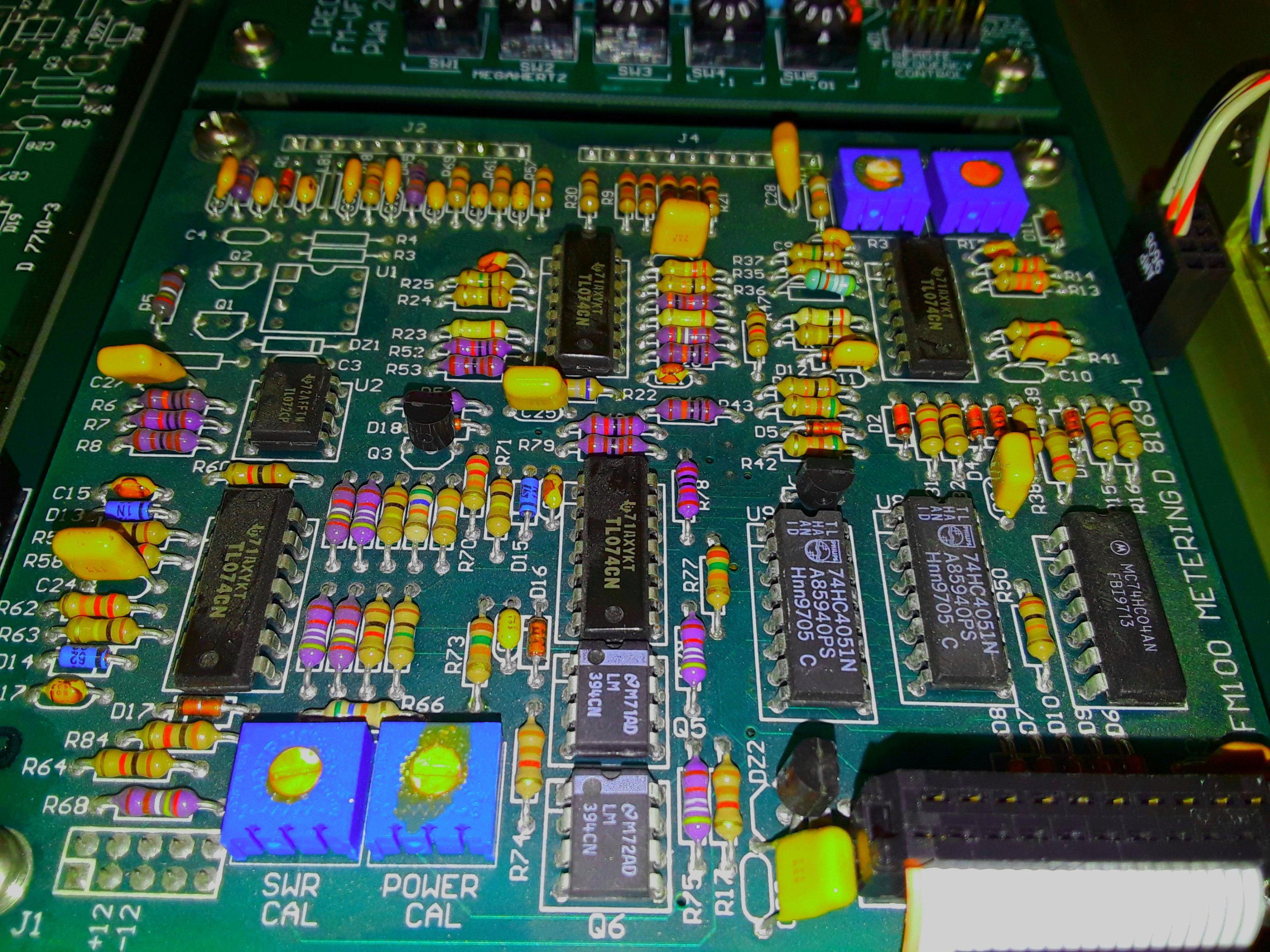 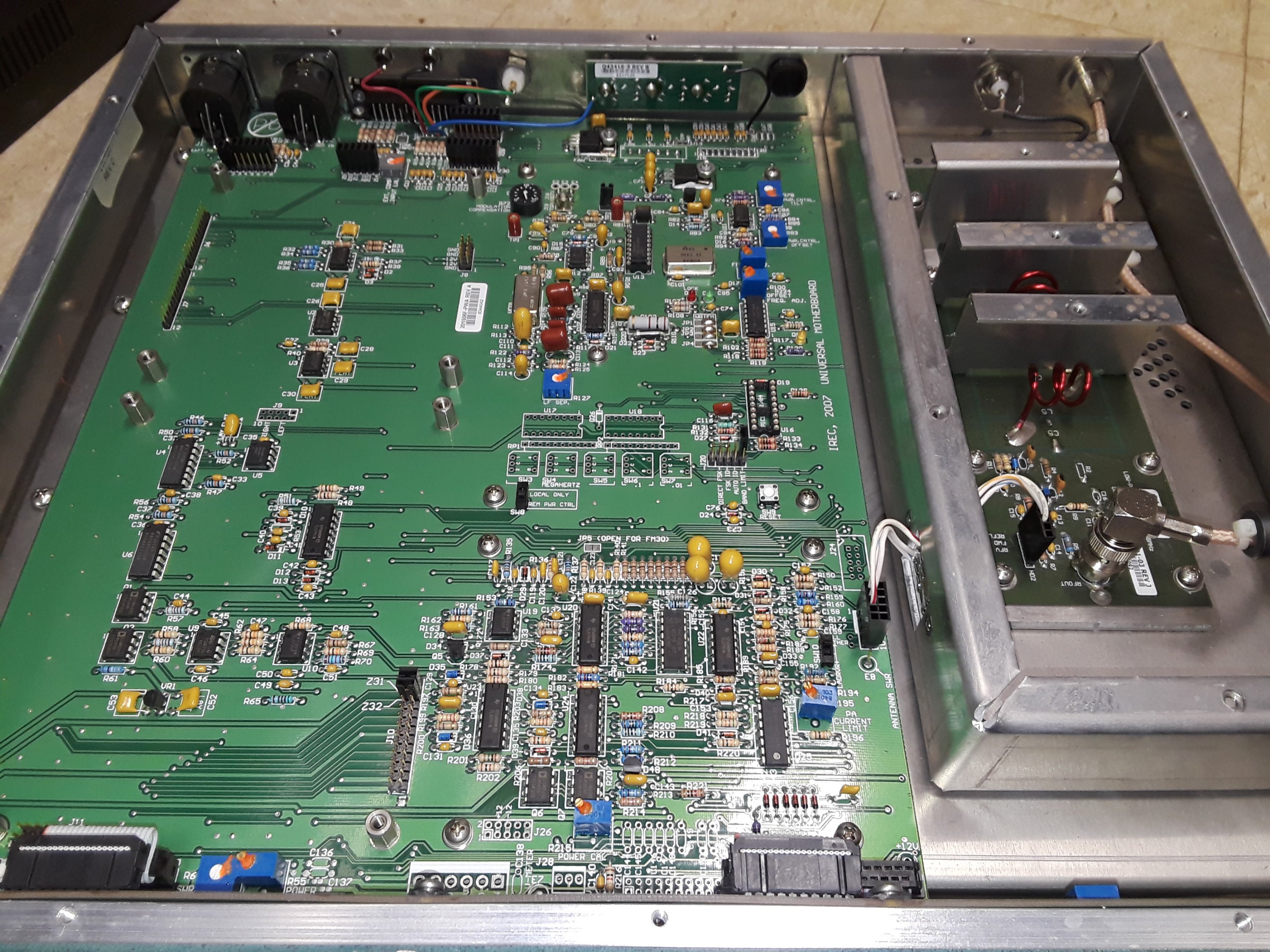 Newer Crown. The lowpass filter is the current design; every unit I’ve seen made after maybe 2002 has this same one. If I had some time to spend not entirely productively I’d sweep both side by side for comparison.

Now, the exciters have changed a little. 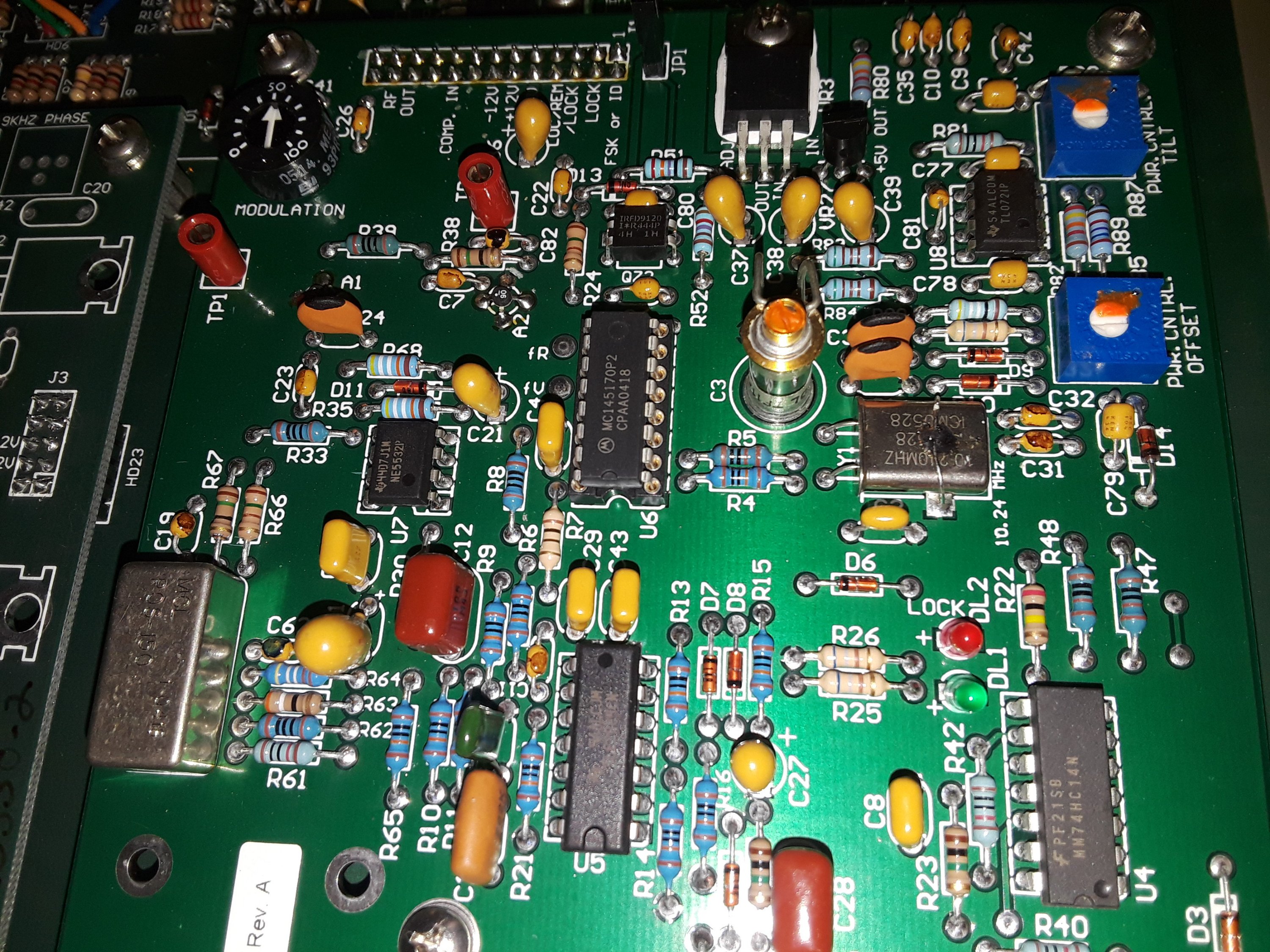 Early model. The reference oscillator is composed of crystal Y1, with C3, the tall piston variable capacitor in the tank circuit. The metal package at left is the voltage controlled oscillator that generates the final signal. Everything else is in charge of feeding it the right dc voltage to set and modulate its frequency. 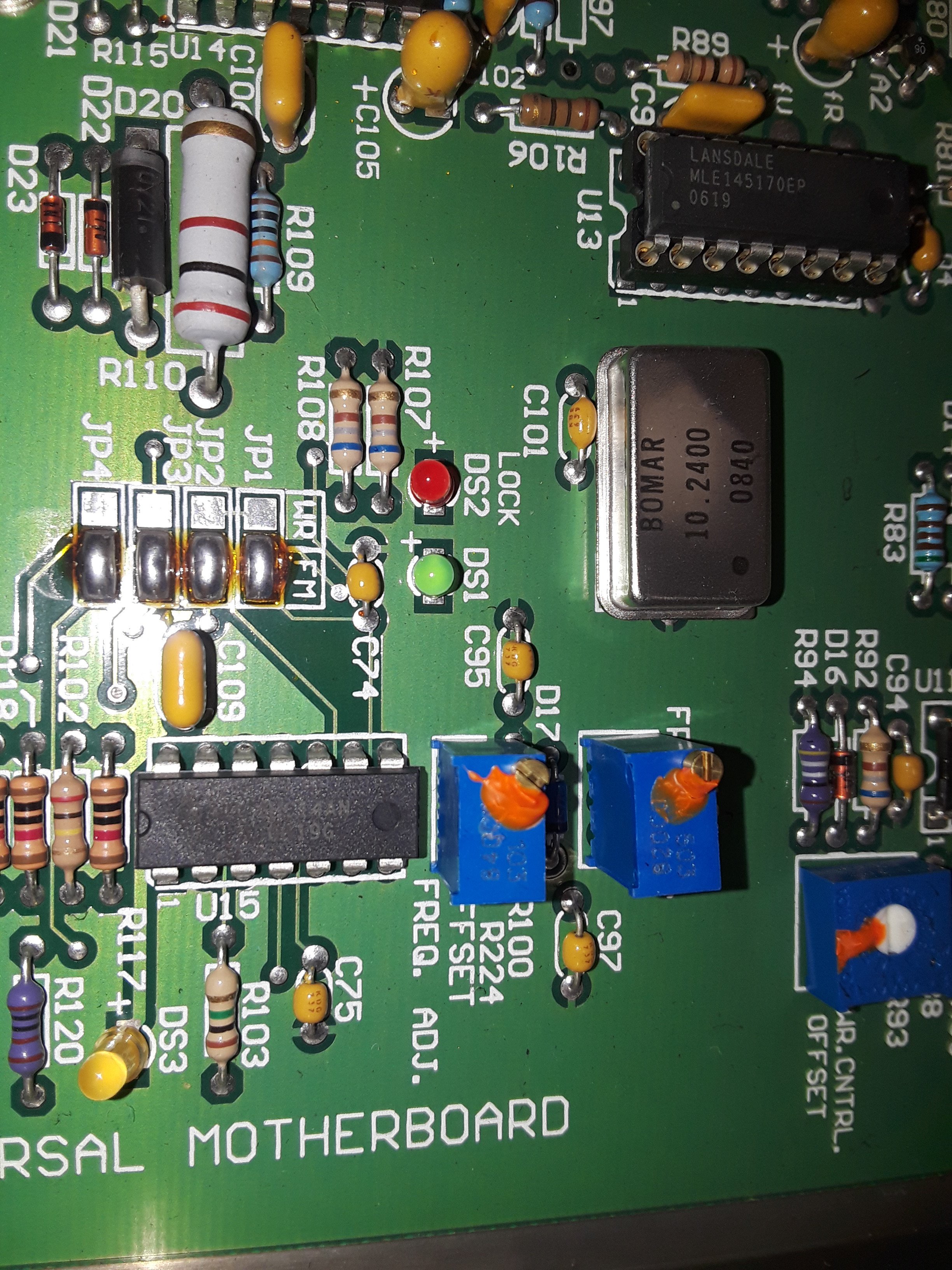 Later model. The same Mini-circuits oscillator (not shown) is used but the whole reference oscillator got changed out for a high performance TCXO block. Simple and elegant… 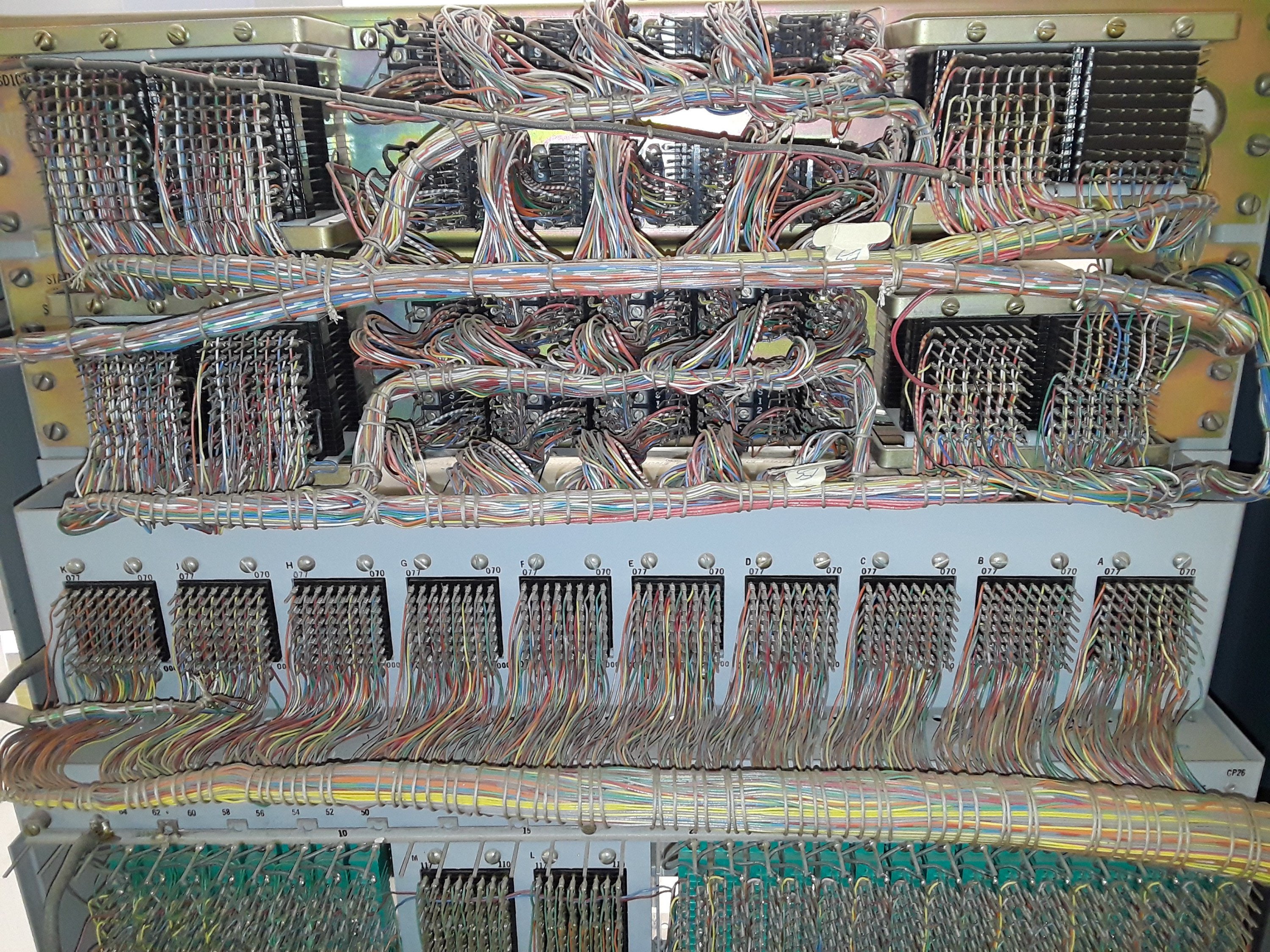 Beautifully laced wiring in some nearby panels 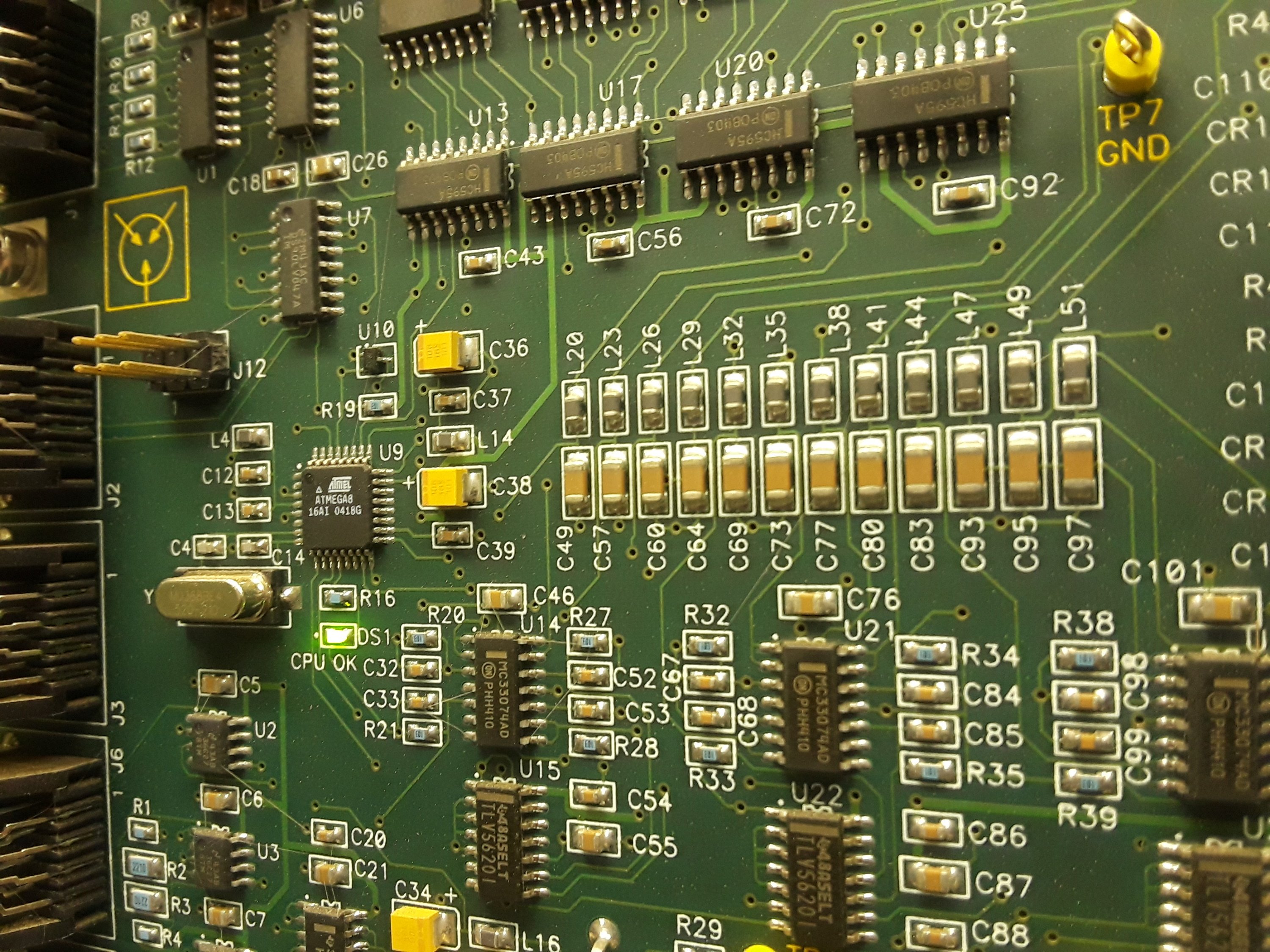 ATMega At Attention! This is inside that Nautel transmitter you see showing me its teeth above. I do like these little systems-on-chip. My experience with them has mainly been using them on the Arduino platform. They’re really good and somewhat frighteningly tolerant of silly abuse like ESD on the I/O lines. I’m not sure what the exact function is in this card though I suspect it’s doing A/D conversion and serial I/O with the host CPU. 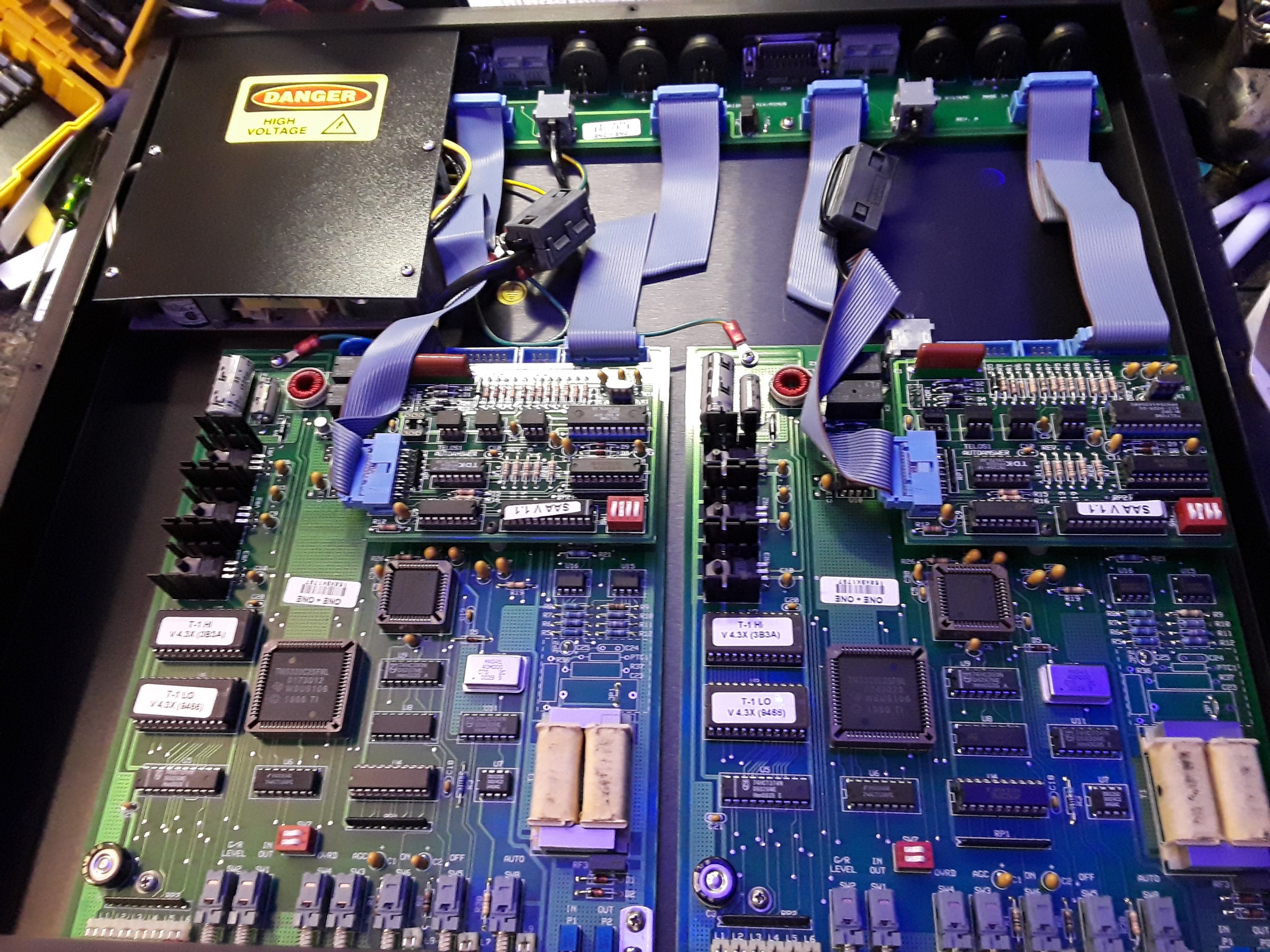 Inside of a Telos One Plus One phone system. Yeah, that name sure fits, they pretty much gave you two Telos One hybrids in a pizza box case with shared power supply and a simple audio interconnect that adds an optional mix-minus/conference call-like feature. If you set that jumper block at top center to mix minus, you only have to feed one mix minus out from your mics to the unit, and if you pick up two callers at once, the audio from each caller gets routed to the other along with your mic audio. This is a neat feature that we might or might not ever use… Who knows.

The post title refers to the odd message that scrolls by as a level is loaded in Katamari Damacy. I just imagined that wind farm being part of a level… You’d probably roll up the wind turbines shortly before rolling nearby skyscrapers into a replacement for the moon.