Copied from where I wrote about it on Facebook…

Let me take a moment to tell a tale of horror. Sorry, I missed Halloween with this one….

The Evertz 7700ADA7: A wonderful piece of hardware. Truly wonderful, I have nothing but glowing things to say aboutAAAAHH HELL IT’S A PIECE OF CRAP.

Look in its manual and you’ll see a big contradiction. The block diagram says it has buffers on every output. The text says it has three output buffers. In reality, best I can tell from physically inspecting the card, it has ONE and all the outputs are just paralleled… maybe in pairs or something? Look closely and you can see the ICs at the right where the outputs come off. Everything to the left of center or so on the card is the power conversion and fault detection circuitry. 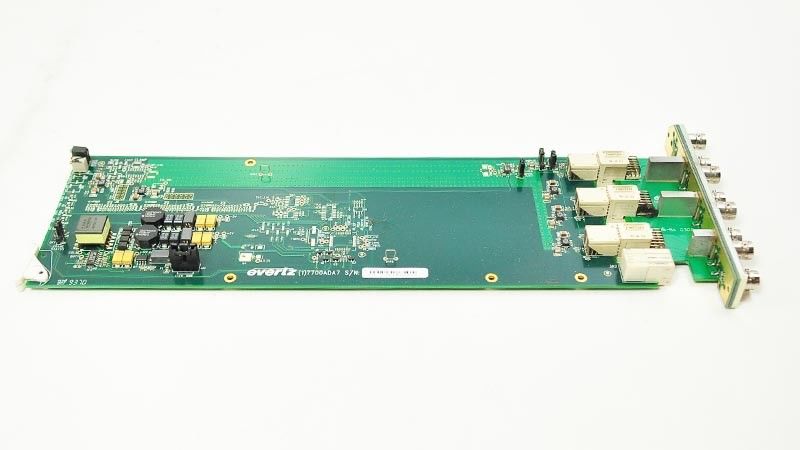 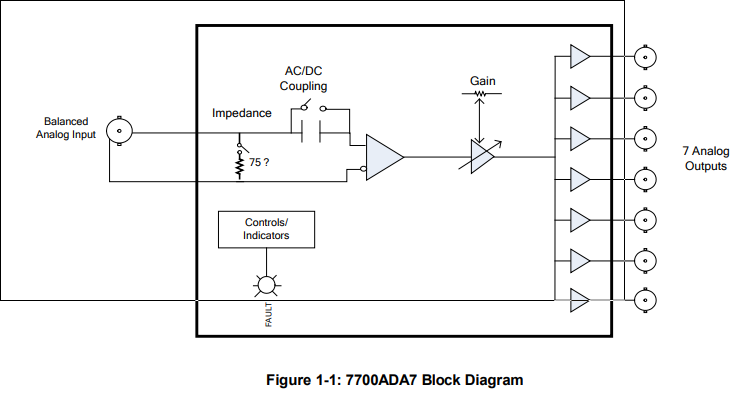 The input can be set with 75 ohm termination onboard or hi-z. This is like the inputs on the old Grass Valley Group analog video DAs, except that those had a far more convenient setup with two BNC spigots on the back – you used it either as a loop thru (short BNC jumper to the next DA card in the frame if you needed more ouptuts) or popped a terminator on the unused one.

Evertz says you can use BNC tees to do the same thing on theirs, except… there’s no physical space for the tee to fit back there… and if you do somehow manage to physically connect the cards up this way it’s obvious their idea of “hi-Z” loads the line down BADLY after connecting two or three cards.

So, someone who came to that facility before me wired the cards with the black burst coming from the Evertz GPS locked sync generator and switch unit of HORRORS (more on this later!) to the input on the first of like six 7700ADA7’s, then a short jumper from output #7 to the input of the next… and so on…!!!

I mean, luckily, by some grace of Farnsworth’s ghost himself, this still managed to work… HOWEVER…

Please note that I said the outputs are not individually buffered.

The DA outputs were all full up when I had to connect a long cable to a new video playout system, except for one output on the first in the chain that went to some long abandoned weirdness halfway across the building.

I will state the following now that the statute of limitations is over and I am several thousand miles from anyone who would want to throw things at me for what happened.

We were in a newscast and a break was rolling at the time. I disconnected the mystery cable and there was no excitement. I connected the cable that went about 100′ over to the new playout system, and I heard screaming.

Apparently when I connected the new cable, a glitch occurred on the output of that DA, and since it had no buffers, it propagated down to all the others and effectively to every other piece of equipment in the plant. The people in the control room were treated to the sight of every source suddenly melting down and laaaazily reclocking and coming back one at a time.

At the same time, this lit the FU Cracker on each of our Ericsson satellite receivers. See, this model.. I think it was RX8400? … if you paid for a ton of extra option codes you got an internal frame sync/converter. This was EXTREMELY FRAGILE, though– if you caused any problem with the black burst sync, the FU Cracker’s 45 second fuse was now lit and there was not a thing you could do about it. Once the fuse burned down, BANG!!!! The video and audio were gone. It’d sometimes come back after an agonizing 15 seconds or so, but if it did, this would keep recurring until you rebooted the receiver.

You could practically hear the hissing.

Fortunately no sat feeds were used in the remainder of this newscast and I was able to go around and do the mass reboots once it ended.

So, as for that Evertz failover switch unit that fed the stack of DAs with blackburst… boyy that thing had a … failure mode… about it.

So the way that unit worked was it took the output of two independent GPS locked timecode generators that I think put out SMPTE timecode and trilevel sync. This fed into the failover box which would “seamlessly” take over if one of those went invalid or failed, I guess, and it also generated blackburst with VITC, had a small DA for the trilevel sync (4 ports or something), and also generated a 10 mhz reference signal and some other stuff I’ve long since forgotten.

The chief engineer needed trilevel sync for something near it, so he removed the terminator from one of the taps on that DA.

“Tick tick tick tick tick tick”, responded the failover unit.
Cue MASSIVE screaming from every corner of the facility. Bad sync hit HARD, all the satellite receivers puked their guts up instantly, just about the only thing that survived it was the Omneon playout boxes and the Kahuna switcher. No more live shots as the receivers decoding their ASI streams died. Yes, we were in a newscast. Recorded packages were frantically bumped up the schedule as the Omneons, Grass Valley K2 playout and cameras were the only thing left alive.

The Omneons and K2’s were really good about sync loss, if the sync went invalid they just switched to free running without any further ado. Everything else was just a fecking drama queen.

4 thoughts on “Sync Pulse of Horror”