This little monster showed up at my doorstep and I decided to see if I could get it running again. It’s an air dehydrator, which compresses air, separates the moisture out and ejects that, then uses it to pressurize an RF transmission line to avoid moisture intrusion. 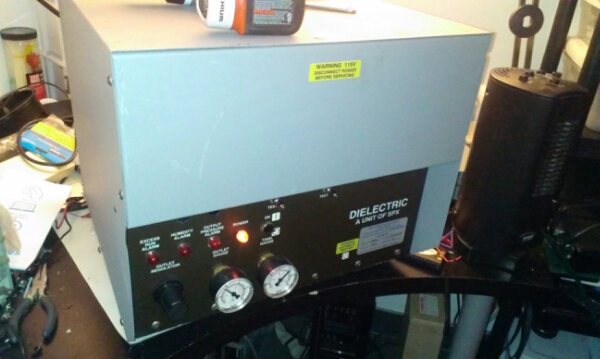 The instructions mentioned a humidity sensor inside that has to be replaced every couple years of operation. I removed it and took a look, it showed no signs of wear or contamination. Upon powering the unit up I got a humidity alarm and the unit would just vent air via a “humidity bypass” burp valve inside which prevents it from firing wet air up the feedline should something go wrong internally. 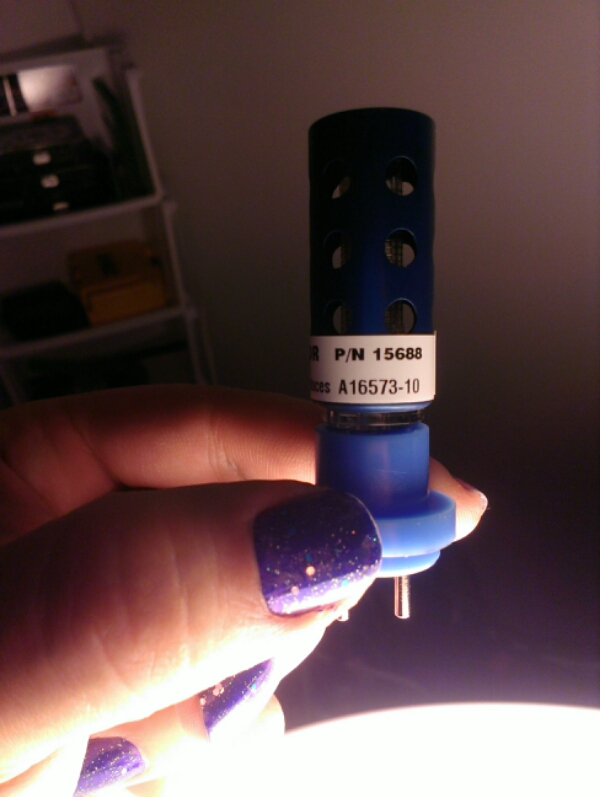 After it ran on my bench for a while, the humidity alarm cleared and it pressurized its tank and was ready for business. The humidity sensor goes in that brass block with the 115V warning on it; the two cylinder blocks behind it contain the moisture absorbing material. The timer to its right controls some pneumatic valves which drop the pressure in the dessicant cylinders to zero every 30 seconds while the pump is running, firing air (and WATER!) out a waste hose in the back. 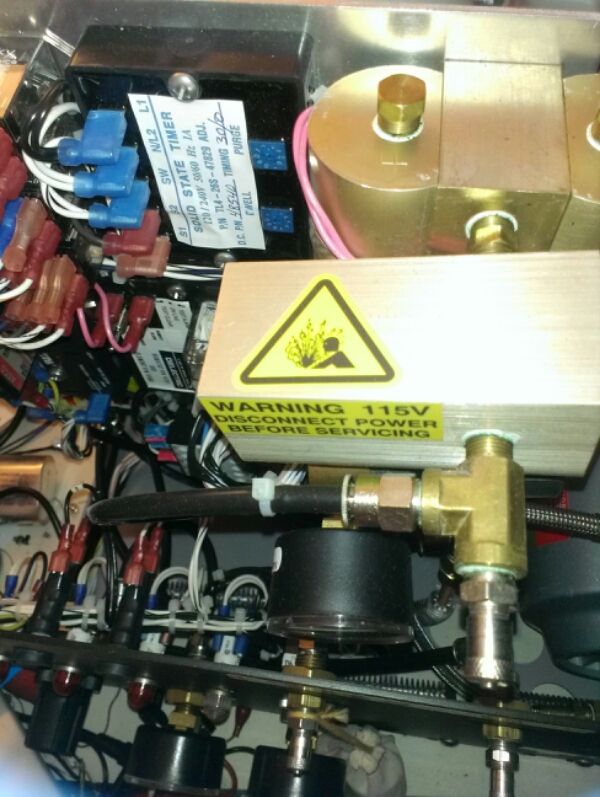 On the right is the Gast pump that compresses air up to 40 PSI to run the works. On the left is all the control logic. The other unit I’ve worked with before is an Andrew DryLine, which just has one simple programmable logic controller board in it. This one, well, looking at it makes me think that the people who designed it chose to build their job security into the control logic – what even IS all of that?! 😉 The four pole contactor at the bottom doesn’t appear to actually be what controls the pump turning on and off. I… don’t even know. It works, that’s the important part. The humidity bypass valve is under that threaded hex nut/nipple on the left, and the time delay relay brick below it appears to be responsible for firing off the Excess Run alarm should a pump run cycle last too long (usually, this would signify an air leak!) 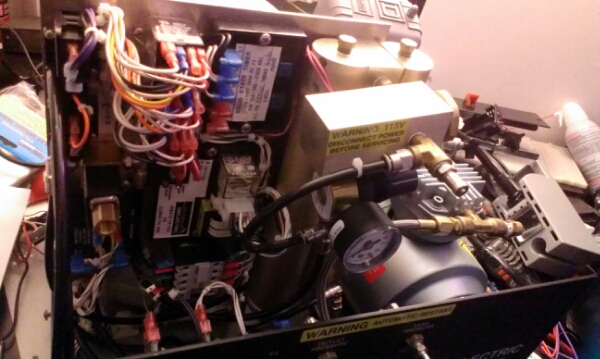 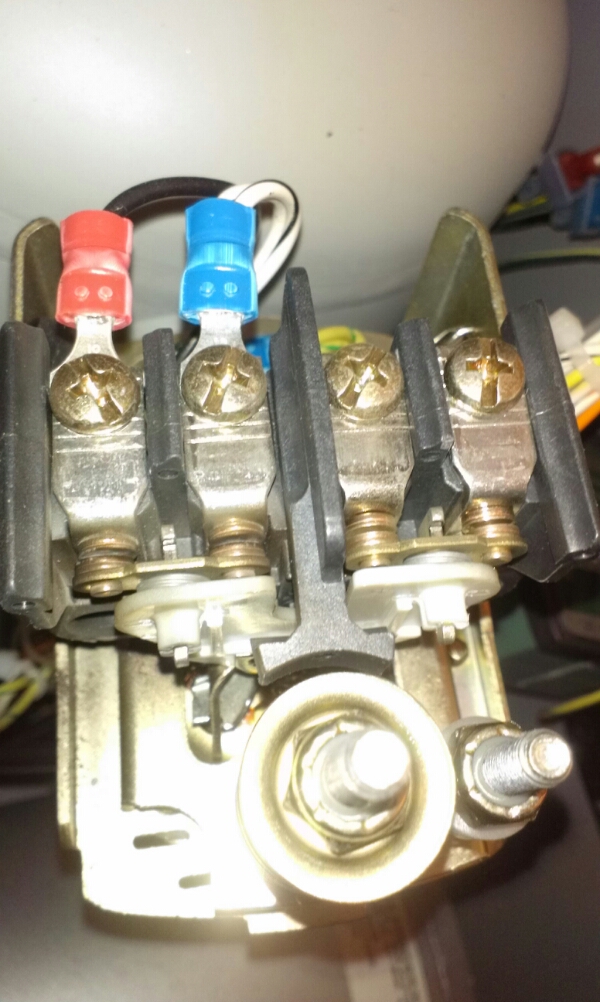 The pump is cycled on and off by a simple Square D Pumptrol air pressure switch… off at 40 PSI, on at 20 PSI. 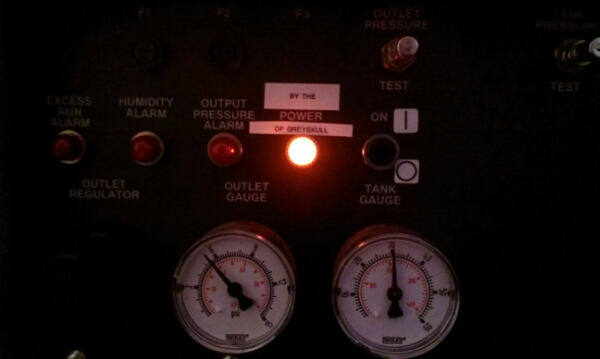 BY THE POWER OF GREYSKULL!!!
An amusing note I found on the Gast pump. I’ve seen similar pumps used for a lot of laboratory applications including as low vacuum pumps, for things such as providing suction in dental offices (that slobber extraction hose they hang in your mouth)… Well, once the pump’s been used like THAT, they don’t want it back! Can you really blame Gast? 😉 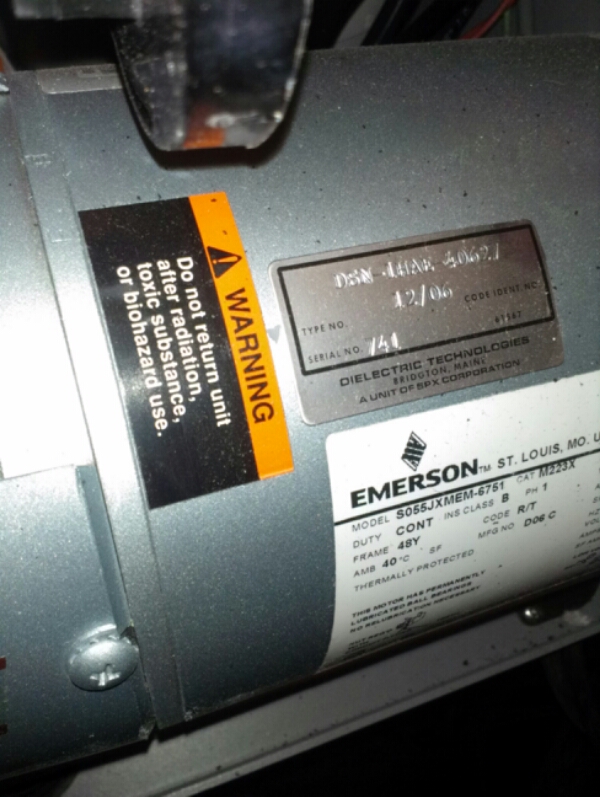 The Gast pumps are field rebuildable with a seal/gasket kit to keep the unit in service. On this unit, loosening four screws flanking the gray upper front cover is all you need to do to be able to reach in there and pop open the air inlet filter on the pump for cleaning, check the tank pressure, and get to most of the control logic. This is a sharp contrast to the Andrew unit I’ve worked on where you have to remove the whole thing from the rack and pop eight screws from the top cover to get to the filter, which the datasheet claims is behind the front access panel (NOPE!!!).