Someone asked me what that terrifying mascot face is that occasionally comes up in the header image. I currently have like ten different pictures in random rotation there, and one of them does look very much like a horrible rejected character from Freddy Fazbear’s Pizza. Well… it is none other than Miami-Dade County’s own Emergemanasaurus! 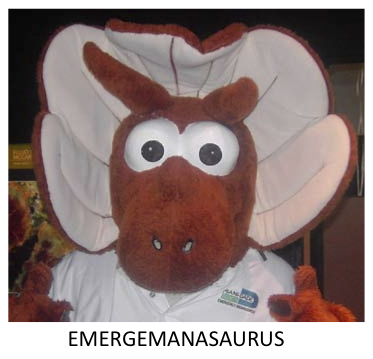 Absolutely nothing is known about this Emergemanasaurus character, why or when it existed, but it appeared in a PDF of an old newsletter from Miami-Dade County Emergency Management and I took a capture of it to preserve as proof as to why I can never take the agency particularly seriously. (Well, that and our repeatedly nonexistent CERT program.)

And then I put it there to stare at people with its cold, lifeless, conjoined eyes, because I’m an evil troll.

Whatever the hell it was, I doubt it smelled particularly good.