A couple of months ago, I had a silly adventure. I was at the Homestead tower, just a couple blocks down the street from a Miami-Dade Fire Rescue station that was, at that time, on “brownout” due to Miami-Dade County budget issues. If you want to learn more about how Miami-Dade’s budget and politics work, I recommend you go check out Eye On Miami — I distance myself from politics to make life more pleasant.

The first thing I’m greeted by is a blaring fire alarm in the hallway of the transmitter building and a really foul electrical fire smell, but no particularly visible smoke. I figured either it wasn’t a particularly big one or it had already gone out and the smoke had been evacuated by an exhaust fan. Either way, I proceeded carefully inside and found the alarm belonged to one room on the first floor with the transmitters for Minnesota Public Radio’s classical station. I called their central control as indicated on the door while using an Xcelite “greenie” as a Sonic Screwdriver to gain access.

Inside I found everything coated in some kind of white sticky filth. The air filter on the Harris HT 25 FM transmitter’s power supply was totally caked in it and I’d first assumed this may have been the source, as the power supply was subsequently running too hot to touch. Keep in mind this is a power supply unit the size of a Volkswagen Type 1 “bug”.

At this point he had an engineer on the way to look at it but our conversation turned to what on earth had Let The Smoke Out. See, there’s a theory with electronics, they all work because they have this Magic Smoke sealed inside at the factory.

Once you let the smoke out, the device never functions again, and it is impossible to force it back in there. Now I wish I’d scraped some of that white gookus off, maybe someday science can figure out how to coalesce it back into injectable Magic Smoke essence. Aaaanyway…..

The person at MPR indicated that he’d had contractor after contractor working on the site, whose maintenance is principally contracted out to Clear Channel Miami. His only indication that there might have been any trouble was that he tried to run a backup transmitter at the site and “it just wasn’t coming up right”. I proceeded to clean their filters while I waited for someone to arrive. 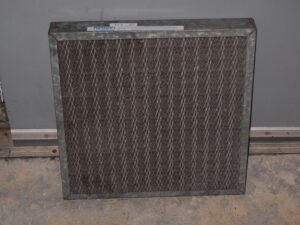 Shortly afterwards I found some very melty things in the vicinity of the dummy load. The site has two transmitters, one antenna, and one dummy load. A coax switch in a DPDT (double pole / double throw) configuration routes the output of both transmitters so that if one is set to antenna, the other is set to dummy load. This way one of them can be run for testing/maintenance while the other is on air, seamlessly. Smokelessly, even, if everything works right…. which it didn’t really. 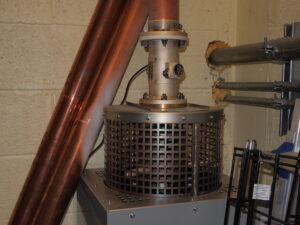 The object seen here is the top of the dummy load. Down inside the gray box, there is a star shaped holder clamped to the tops of six noninductive “Globar” type resistors that go down a chimney with a blower at the bottom. RF is applied to the top and grounded at the bottom, and they’re paralleled to form a load that presents 50 ohms impedance at  up to 25,000 watts…. IF THE AIR IS FLOWING. Unfortunately, there was a little oopsie. Note the heat darkening to the metal grille, the white gook splattered on the two pieces of spare feedline to the left… 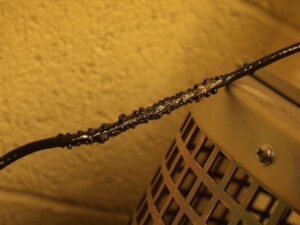 …And this Krispy Kable…

The air coming out of the load by convection was probably over 500 degrees F. It seems like the resistors got just hot enough to smoke off the coating on the outside but not actually burn out or crack – the load actually tested 50 ohms at DC after the incident.

In the above picture you can see a Bird wattmeter line section. The “slug” which contains the coupling circuitry to pass a reading down the cable as a DC current is not in it. Here is what happened to the slugs from the heat. 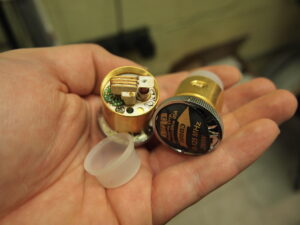 I call these flame broiled Birds.

The plastic top on one actually became convex and pushed the label off; on the other, the plastic bottom that protects the sampling element warped and tried to fall down the line section when I removed the slug. It’s actually fascinating to see how these work inside, they’re sort of a non-contact coupling with an L/C circuit and a diode. One of these days I’ll have to learn the magical theory as to how these directional couplers work. (Yes, they’re directional – they measure the power flowing in the direction the arrow is pointed, and you can turn them around to switch between measuring forward and reflected power!)

The backup transmitter was a Rockwell-Collins that looked distinctly older than I am. The other guy who showed up on site (whose name I have sadly forgotten) went to turn it on. He pressed filament on… and the dummy load’s blower began running with no problem. Mystery upon mystery, what happened? 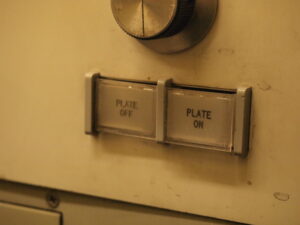 At this point we waited for a “ready” indication telling us it was time to turn on the high plate voltage to make it start.

The old beast had none.

I was actually wondering if it’d light the Plate Off button or something as a ready indication, but it didn’t do that either. I started messing with the multimeter function on the front panel and observed that the meter didn’t work right, and the exciter’s power seemed to have flicked on and off a time or two. 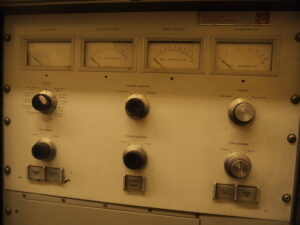 With us both standing in front of the transmitter, he reached for the PLATE ON button.

Old tube broadcast transmitters like this usually run 4000-9000 volts DC on the plate at several amps. When voltage like that finds an unwarranted path, the whole unit tends to respond with an unwelcome BANG. Knowing this, I just about dashed from the room before he could touch the button.

It made two wimpy clacks, but nothing happened. The plate voltage kind of wobbled around but the wattage never went anywhere. The multimeter (when I could get it to work) indicated that the bias voltages were there, but it looked like one supply voltage was missing in action.

He asked me if I had any ideas. I looked at his feet and saw that he was wearing sandals. I was wearing steel toe boots. I said, “Hold on, I’ve got this” and kicked the unit in the front panel. The sound from the transmitter gained a bassier thrumming note, and a glance at the 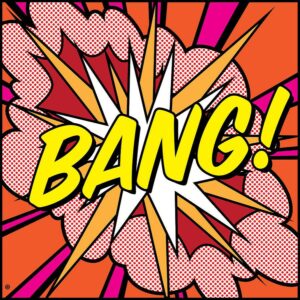 To repair something like this, you must truly understand it.

Last I heard they were going to go back in there and reverse-engineer the mess that was made of the control wiring to allow this transmitter to run without the load blower running and its airflow vane switch moving. Alas, the only way I will ever know for sure is the smoke test: Did the building fill with smoke again?

I’m also hoping that Harris HT 25 FM gets a very good internal cleaning at some point. They are known for making some spectacular bangs when they get unhappy.