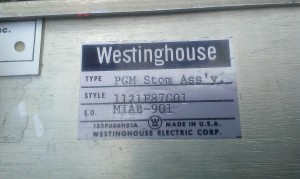 …You read that right, the module has an ancient TYPO on it.

Today I was at the Miami-Dade County Store, and somewhere in the shelves of weird old broken network hardware and PCs that had been picked clean by creepy Jamaican exporters, this one bronze colored anodized aluminum mystery box peeked out at me. The thing just had a strange energy about it, I couldn’t really explain it.

This box has silently served hundreds of thousands of people on their way to work, to play, in good times and bad. But what is it? And what’s with the typo?

I really like some pretty obscure stuff, and I have strange obsessions with certain little bits of engineering and technology – you could use the dictionary definition of “fetish” here.

So here’s the story. I haven’t reverse engineered this particular module THAT far, but what you’re looking at is a module out of a Westinghouse train control system, and it’s from either Metrorail, a since decommissioned Bombardier C-100 people mover system at Miami International Airport’s international terminal, or Metromover. 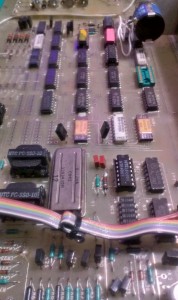 Documentation on the web on these systems is pretty sparse, as it was really ever only of interest to the people who had to install and maintain these systems, and in post Nine ‘Leven paranoia, was probably deemed dangerous to national security whatever. What little I know about how this works all comes from personal observation, from speaking with people who HAVE maintained these systems, and one NTSB report from where some poorly trained technicians with Johnson Controls put way too much trust in this one particular box. Who knows… it could actually be this exact box. Wouldn’t that be just 2spoopy?

So what is this thing? It’s a little electronic bean counter that figures out when and where to stop your automated passenger train for boarding.

As your train approaches a stop, a magnetic loop antenna on its bottom (Metromover) or side above the third rail contact (Metrorail) flies above a special cable attached to a trough in the guideway or on top of the third rail cover. This 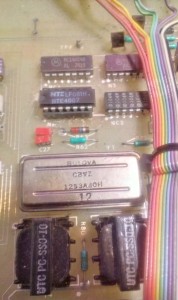 cable looks like television ‘twinlead’, but bigger and with a twist in it every half foot. A control tone is sent on this cable by a tone generator mounted on the guideway, and the twists cause a 180 degree phase inversion and dropout. This unit’s got a couple of distinct stages to it. The first is an analog filtering/amplification stage. This appears to use a big crystal filter made by Bulova (yes, the watchmaker!) as well as four transformers or inductors made by the late Union Transformer Company.

From there, the signal is passed to the digital side of the apparatus. One of the cooler things this has going on is that it uses two CERDIP (Ceramic Dual Inline Package) one-time programmable read only memory chips.

They’re 32 byte. Count ’em… 32 whole bytes, 8 bits wide. There are an additional two ROMs that I have not been able to place the part numbers on because they were covered with some kind of florescent colored glop. They are in sockets after having been replaced in the field, most likely to change the train’s braking algorithm. 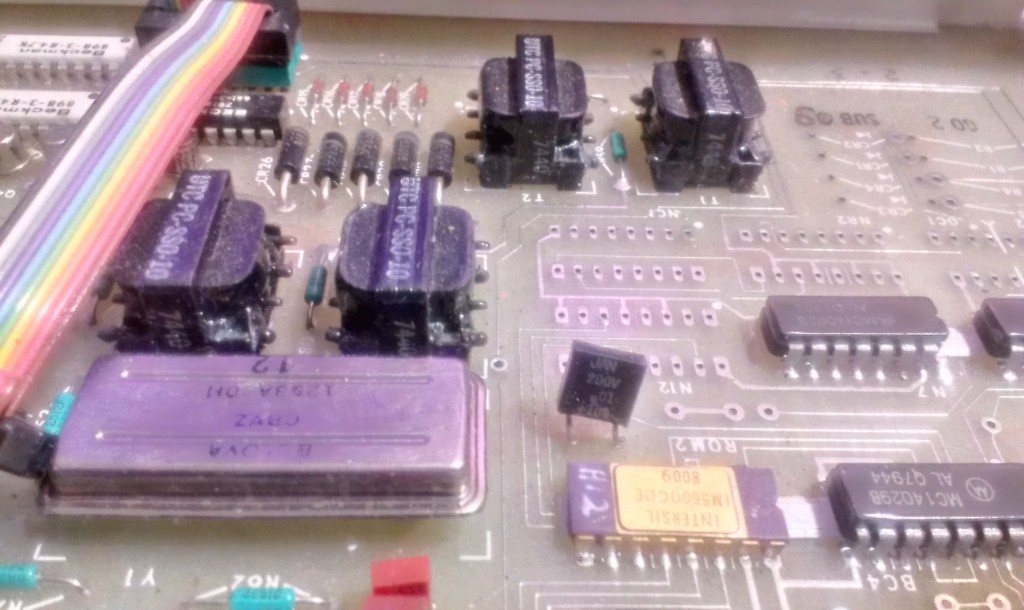 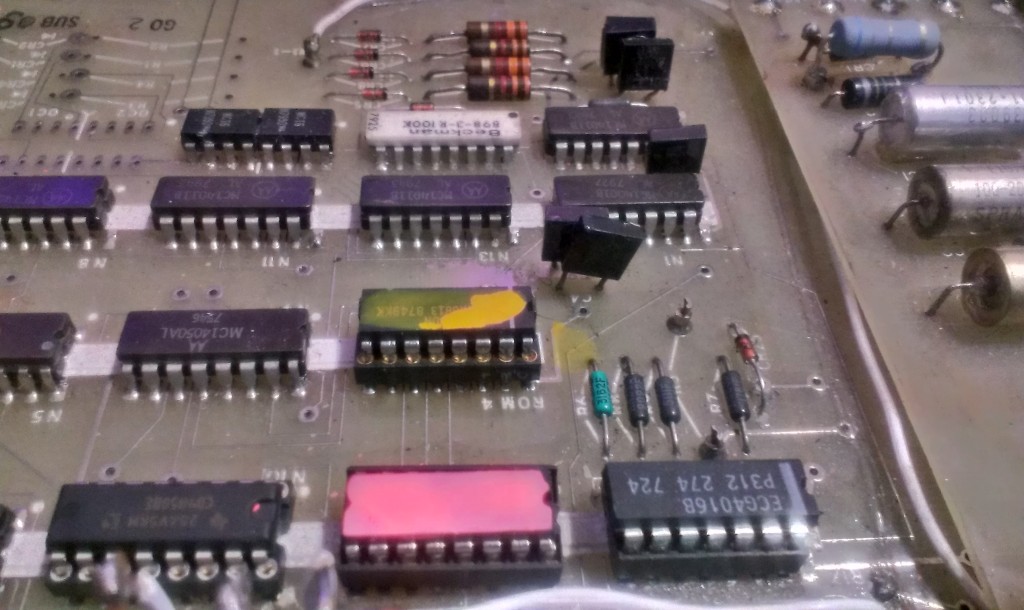 My best guess as to how this unit works: It’s triggered on by an initial pulse, then waits to see the half foot pulses. As they start to arrive they begin to increment a counter corresponding to the addresses in the ROM chips. The ROM chips hold a lookup table that yields target speed codes. I imagine it being something like this:

The speed commands probably get sent off to another module onboard that controls the train’s speed and also uses the speed code commands used for running between stations to tell it what to do.

Now you may wonder, what are the lost arts and techniques I’m seeing in this? First off, this board is very clearly a handmade layout using drafting tools and dry transfer decals on acetate to create a master for photolithographic reproduction. It’s actually pretty awesome. 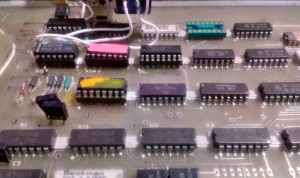 Second, the quality of components is amazing. They used gold topped CERDIPs for two of the ROM chips, which are normally only found on MILSPEC (military specification) parts. As a matter of fact, those small black rectangular capacitors that dot the board have a “JAN” designation – Joint Army Navy specification!

This module was made to last, and in fact, probably did last as long as the train it was installed in.

There were two weird field modifications done though. First off, the module’s screws were all removed and the top and bottom covers resecured using Velcro. Second, these trim pots JB Weld’d to the inside of the housing were (BADLY!) soldered in where there had once been small PC board mounted trimmers for two unknown adjustments. 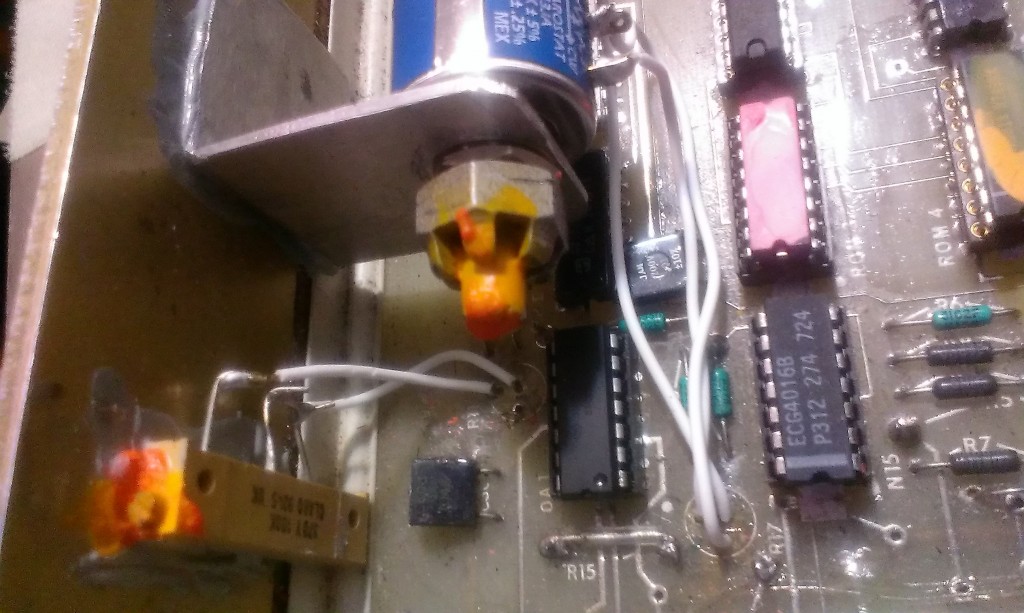 Considering what I’ve heard of the state of parts availability (NONE) for these train control systems over the past decade or so, I’m going to guess this was a case of other gear being scrapped out for parts to keep the train running after the trim pots either wore out or just didn’t allow the 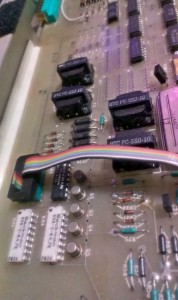 Keep in mind this module is not supposed to be a safetycritical one – its failure simply results in the train overshooting a station and being stopped by the other control systems that normally regulate its running outside of the stations. (Please refer to the NTSB report linked above to see what happens when you jumper those out. It’s not a Good Idea.)

It’s so weird and cool though. What the heck am I going to do with it? I’ll probably just pin it to my wall. It just kind of has a neat feeling about it though, like you can feel the footsteps of thousands of people it guided around the city vibrating on its anodized aluminum frame. Would you care for a nice cold can of 2N2222?

One thought on “The Westinghouse Prog Stom Ass’y, or Lost Arts in Electronics”