I was digging around in the… uh… museum… here at work and found a whole box of worn out video head drums. Some of them had a very interesting feature to them— piezoelectric tracking. 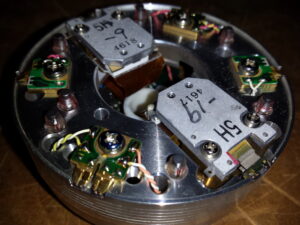 The head can be shifted up and down on a piezo bender.

Why is this here, you may ask? Well, here’s the reason—

Normally, when you play a tape in a helical scan transport like this, the video heads trace an arc across the tape as the drum spins. This arc more or less perfectly matches the way the video frames/fields are recorded across the tape *as it moves* at normal operating speed.

But what about when you are NOT at normal operating speed? The tracking angle will not be correct, and the picture “tears” as the head runs across the boundaries between fields.

Enter the piezoelectric tracking mechanism. By applying a sawtooth waveform synchronized with the head drum’s rotation, Sony was able to cause the head to perfectly track a video field beyond angle differences caused by different tape speeds. Thus, when you grab the jog/shuttle dial on one of the decks employing this system and start moving around, or settle down on a still frame (don’t do this too long!), the picture remains clear.

The Sony J-1 Betacam/SX compact player I use at my desk doesn’t have this, and the picture tears when you mess with the speed or pause on Betacam SP (analog) tapes. On BetaSeX tapes, as my coworker calls them, the digitized frame data seems to land in a RAM buffer somewhere and you can still frame or slow down. The tape transport speed and drum rotation speed in Betacam SX mode are much different, and the angle error doesn’t cause as much of an impairment.

I recall seeing a high voltage warning on or near the head drum inside these decks. Not just for show. It’s about 200 volts!
A much more thoughtful description of the dynamic tracking system and better view of the heads and benders may be found here:

One thought on “Tilt-A-Whirl Video Heads.”