So you may have noticed this photograph in the last post… 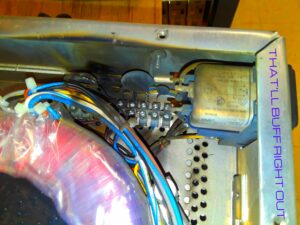 No, it did not buff right out, and it’s going back to the manufacturer for repair this week. They’ll probably have it working in a jiffy though. It’s a Crown FM30 transmitter that was serving as an exciter up at a site where Pacific Gas and Electric was doing some “scheduled maintenance” without notifying anyone of their schedule aaaaaaaand THEY TRASHED EVERYTHING ON THE SITE by putting some massive fugly voltage down the C phase.

What you’re looking at, the charred parts, are Metal Oxide Varistors (MOVs). These are used to absorb voltage surges to protect equipment. In the event of a prolonged high energy overvoltage… that happens to them. They start to get super hot and blow up. Here’s a very interesting article on MOVs and their failure mode, and how they should be kept happy. Your bathroom reading for the day… 🙂

I never looked to see if there was a current limiting fuse inside that line filter/IEC power plug assembly on the back of the Crown, but it seems like the event that blew this up was a slow-cook kind of situation until it reached the magical “Oh… popped it!*” temperature.

* in the voice of photonicinduction.

One of the things very very highly recommended to use with MOVs is a thermal fuse cutout. This ensures that this slow-roast failure will not cause equipment damage – it’ll do either of two graceful things:

A) kill the power! You should do this anyway because if the MOV is conducting that means the voltage is, or has been, Very Very Wrong.

B) Cut the circuit to the MOV. Not the best… but will avoid Magic Smoke release from the protection device.

So, enter the Monster Power MP PLAT 800 HD surge protector. This protector advertises itself as FIREPROOF. Let’s see what they mean. I was gonna make some comment about voiding warranties but a recent Supreme Court decision likely means I did not actually void the warranty by opening the unit. Oh, by the way—

The fact that this screw is lying on top of the surge protector suggests it is not particularly one-way as advertised. Three of the screws holding the bottom cover on are like this; they are milled very badly and have burrs that neatly grip my screwdriver….. OOPS! 😀 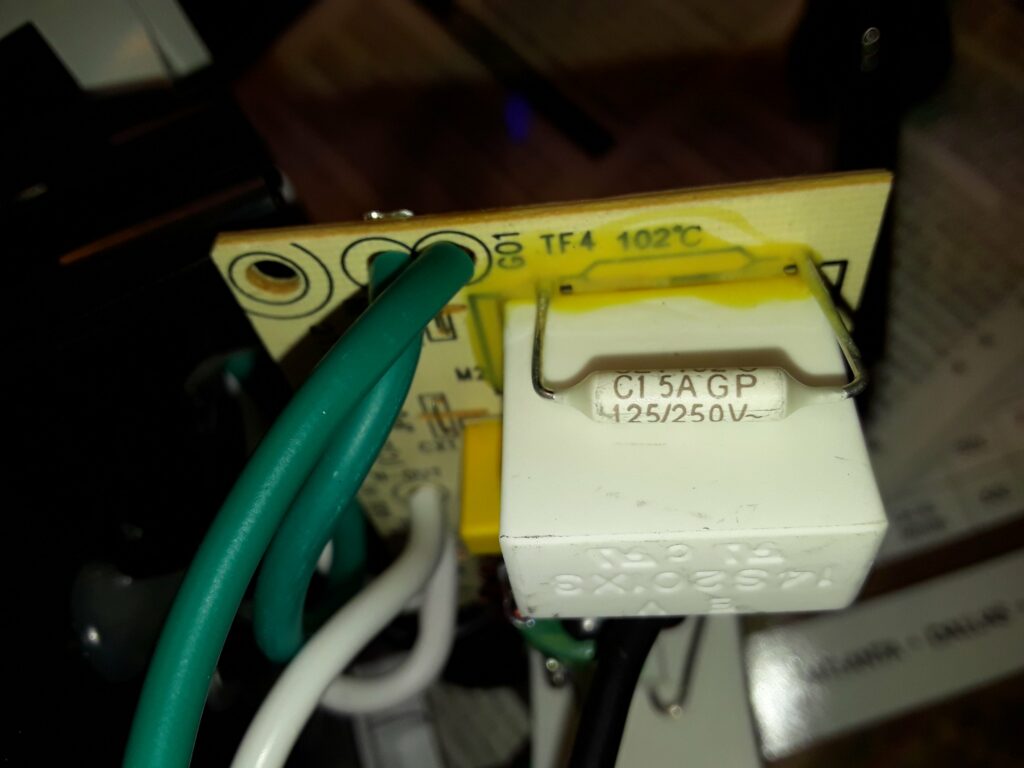 Monster Power advertises on the package that the MOVs are encapsulated in a ceramic compound. This is true, they are in small ceramic buckets that feel like the same material used for the casings of “sand bar” power resistors. If one were to pop at high temperature, everything would be safely contained. Oh, and look what’s right there against it in the foreground ….. a thermal fuse!

Monster Did It Right…. ON BOTH COUNTS! 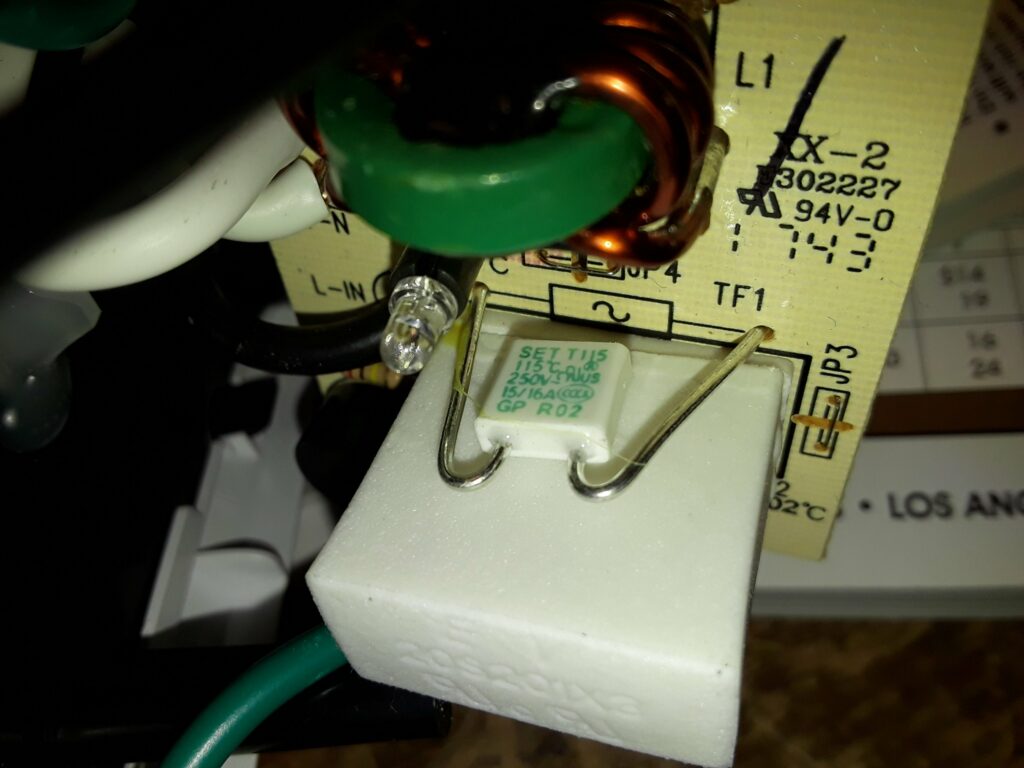 This fuse will kill the power entirely in the event of a high temperature fault. It’s hard to say which protective device will open first as there are two: the power switch is the ubiquitous thermal overload switch/breaker found on most newer power strips. It is deeply recessed to avoid “Oops, I kicked the power off!” accidents.

Also on this board is a simple common mode inductor and capacitor lowpass filter to attenuate high frequency garbage present on the power entering the strip. I’ve seen beefier ones in other products, but this is perfectly fine for most noise that would be present on a home or small office electrical system.

On the back is a rectifier and transistor for the “protection working” and “HD Clean Power” LEDs. Uh, yeah. I suspect they both just go out if the protector is damaged or the ground is open. The manual mentions an audible alarm but it’s not present on this unit.

Also, test points! That’s kind of unusual and suggests that these units may actually be *gasp* TESTED before leaving the factory to make sure the MOVs clamp and everything actually works!!! 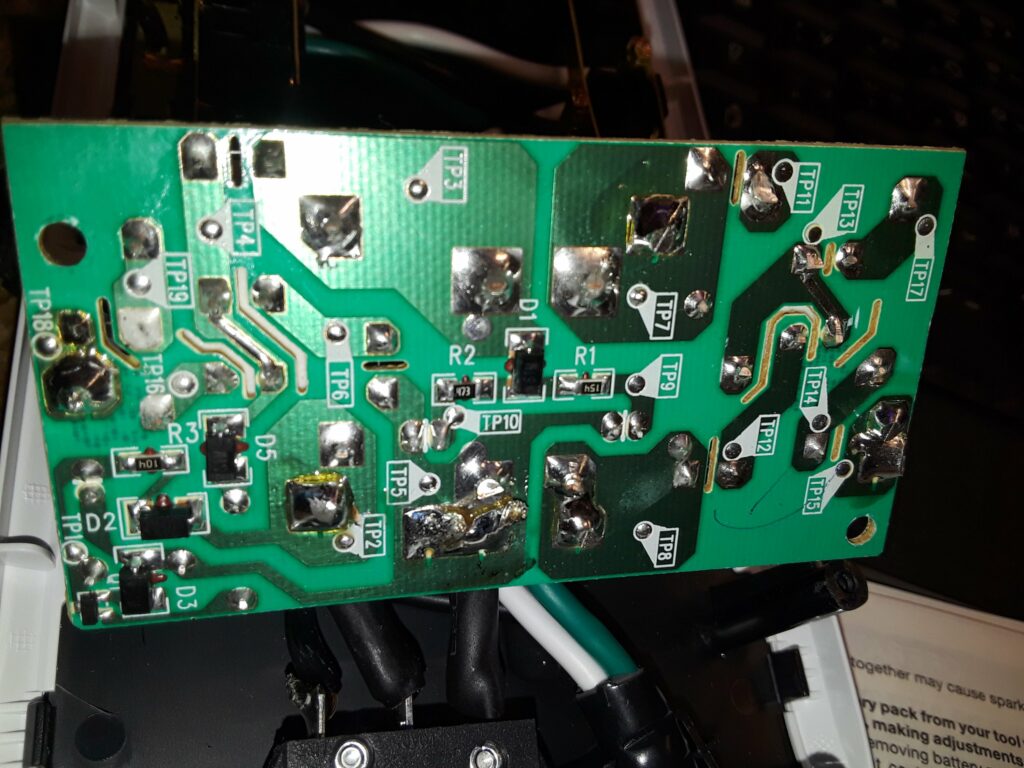 There are two other circuits down inside this – a USB charger (because everything, everywhere, needs a USB charger) and a CATV line protector. I wasn’t able to open the CATV protector’s can to see what’s inside, but it’s grounded to the common ground with a nice fat 14 gauge wire. The USB charger is easier to take a gander at. 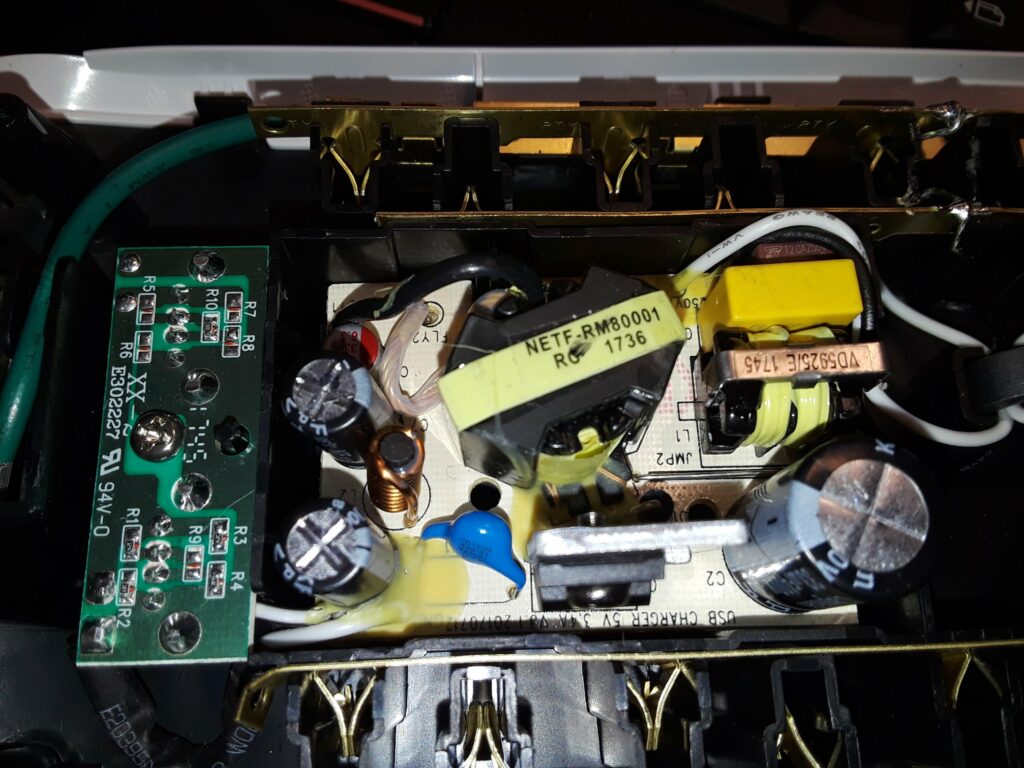 One receptacle is labelled “PHONE / MP3” and one is labelled “TABLET”. Compare and contrast the circuits between the two. The one on the left is an older and more common “fast charge” configuration for smartphones wherein the USB data lines are shorted together. The one on the right is a newer style that I believe is designed for Samsung compatibility – the USB data lines are both pulled to 2.5 volts through a resistive voltage divider. I haven’t tested this yet but it looks like it ought to just work.

So there you go. Monster Power did everything RIGHT inside this surge protector. It’s nothing fancy (no metal case or anything)… but it’s designed well with safety in mind. I’d say it’s worth it!

They also make some fancier models that do have metal cases and things like individually isolated sets of outlets. I’ve been quite impressed with these and feel that they’re pretty much on par with the fancy Tripp-Lite ISObar series, just… painted weird colors. 🙂