I don’t have a washer and dryer at home, so I use either of a couple of laundromats. I never really thought about this before now while horribly bored waiting for stuff to dry, but there’s a very big design flaw when it comes to the user interface of some laundry equipment.

I vaguely remember long ago using a giant Continental-Girbau washer where I was able to just grab all the laundry and flop it right into a basket in front of the machine without anything landing on the floor instead. I never really thought too much about this, but it was pointing out that Alliance Laundry Systems (manufacturers of the Speed Queen and Huebsch brands) dropped the ball… Or, rather, my SOCKS!!!

First off, here’s a more modern style Speed Queen washer. I’ve seen these in at least three different sizes; this one is “two load” and will gleefully swallow the contents of my entire laundry bag as long as it isn’t crammed to the brim. 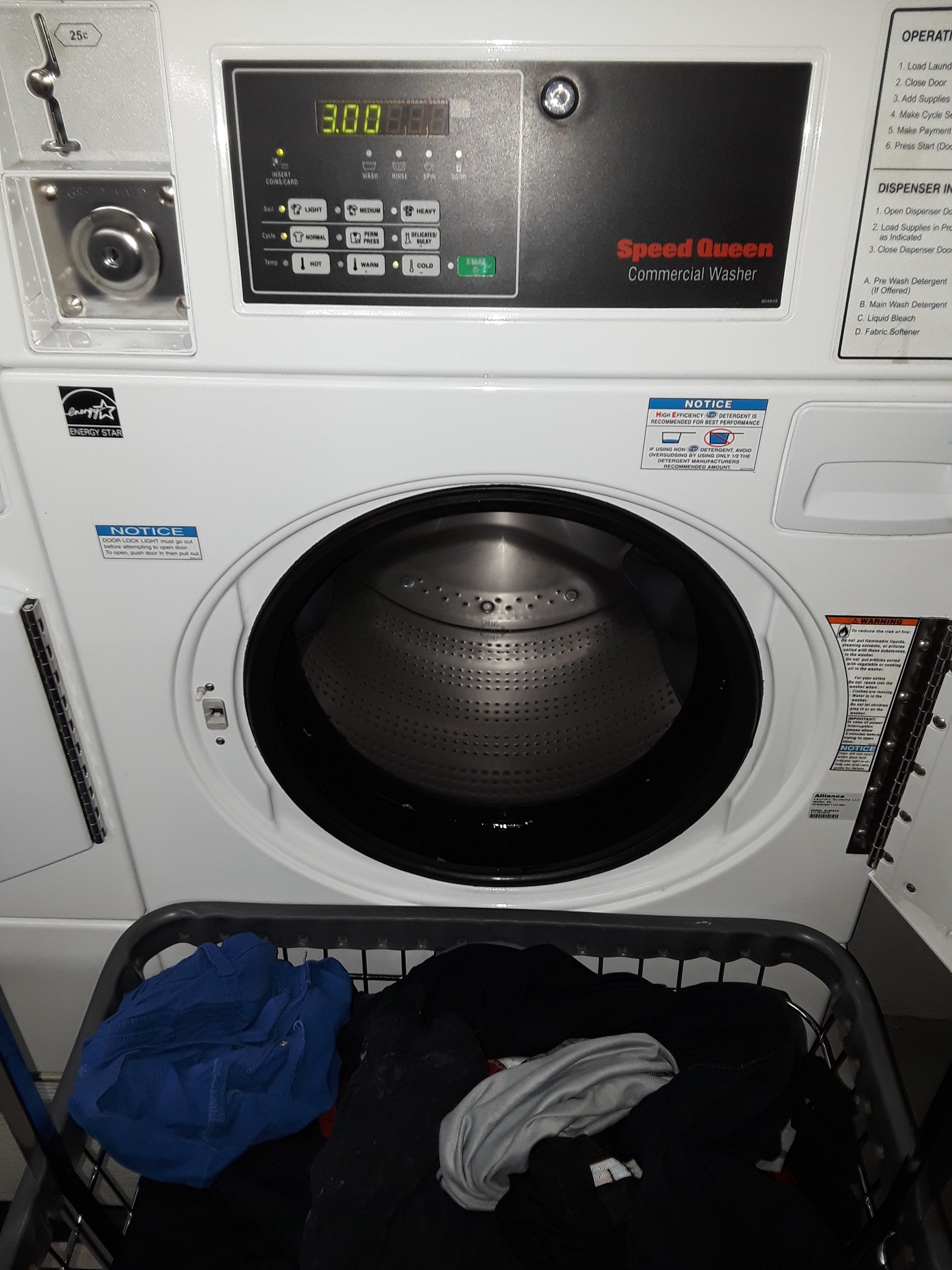 Notice how snugly the basket fits against the front. Nothing may escape!!

This is a “soft mount” machine with a drum suspension and rubber door boot. It’s on a stand that elevates it a bit. If it didn’t have the stand, it’d meet the basket too low.

This one has a weird indentation but it ends above the basket rim, so you don’t get sock droppage. 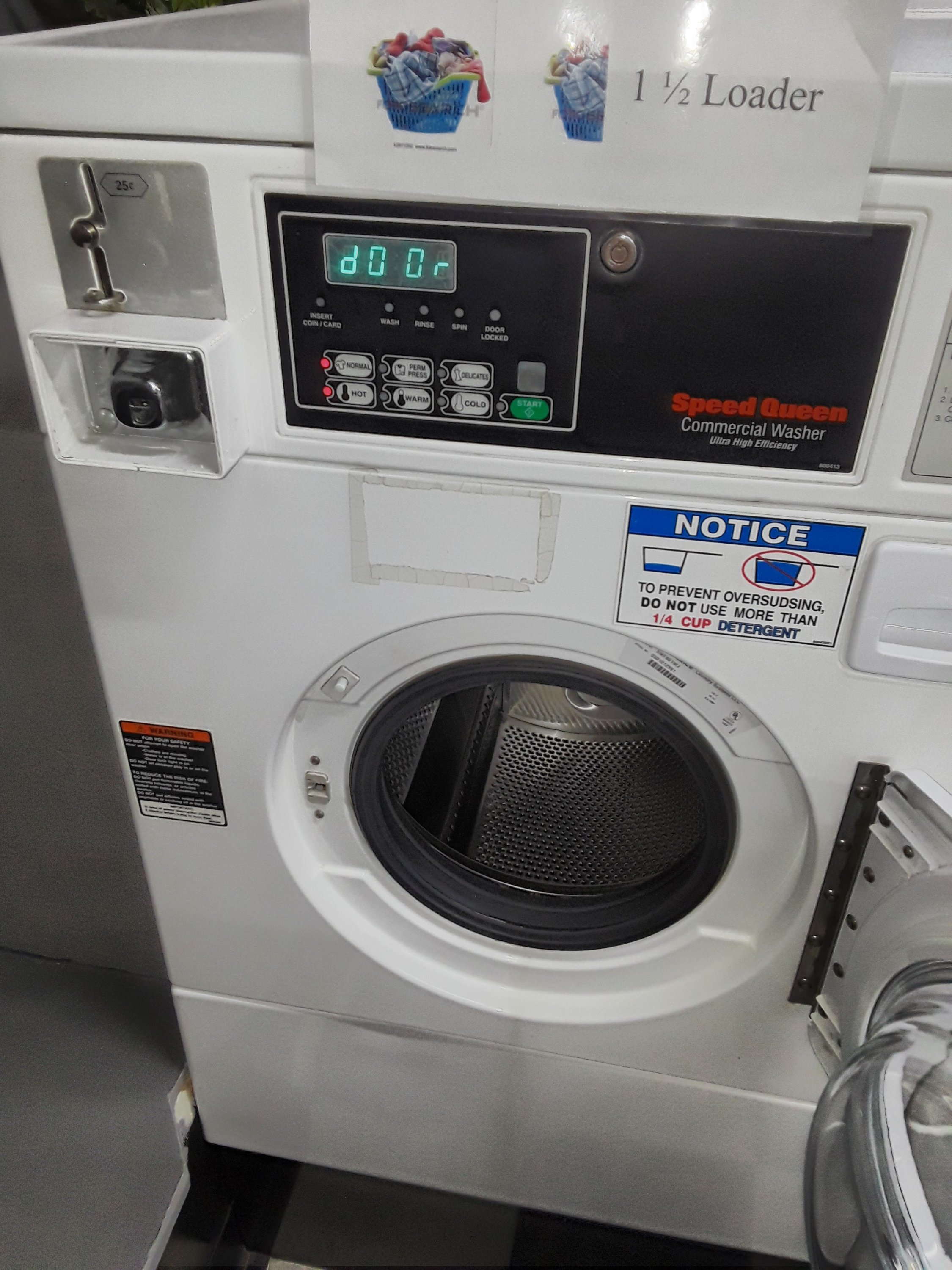 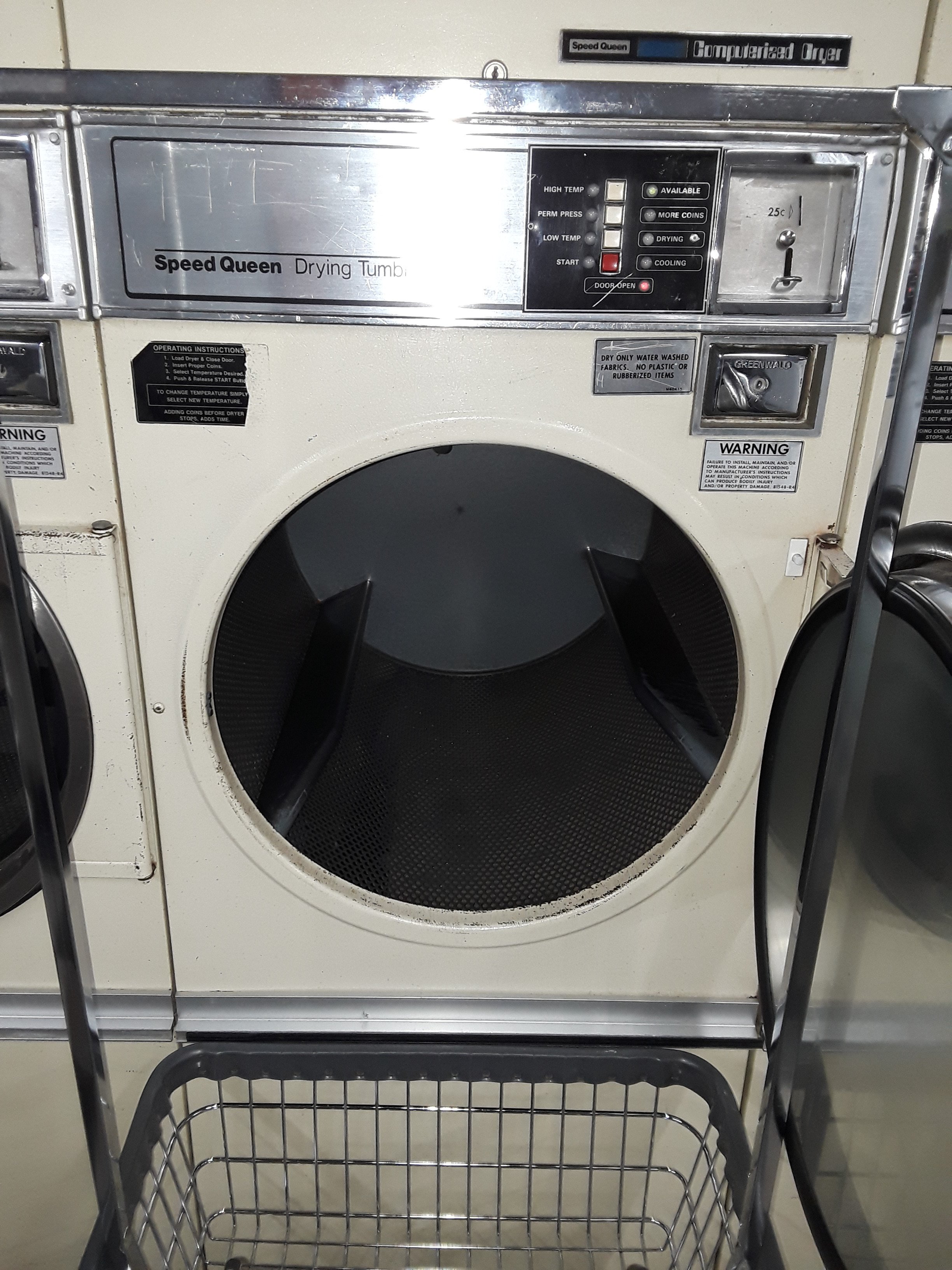 Here’s a very old dryer by them, the same design is still produced with barely any changes other than a more modern digital control. Sadly the pretty teal blue VFD is replaced by boring green LEDs on the new ones. Again, though, not only does it have a flat front but a rub rail is positioned to meet the basket. 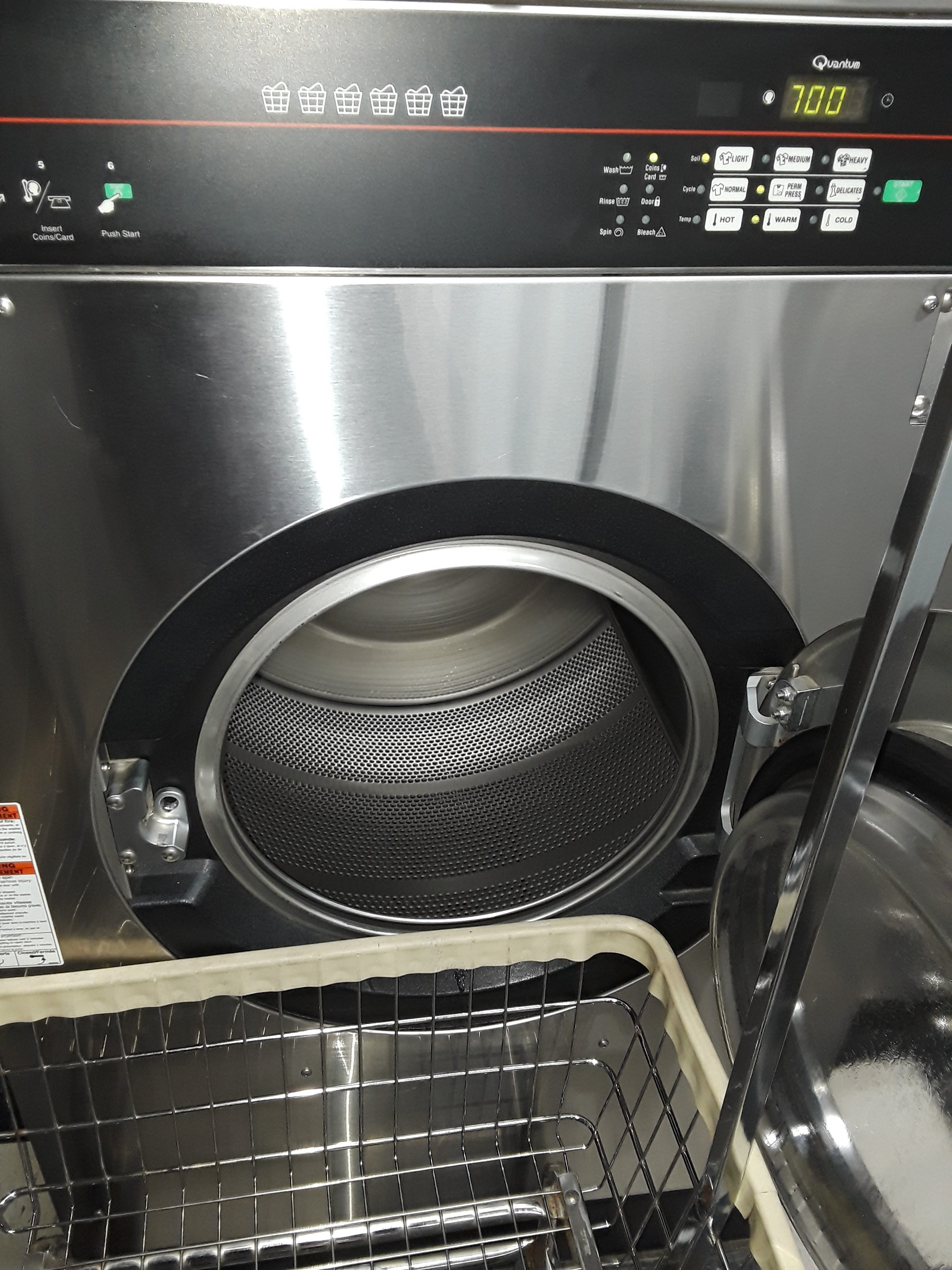 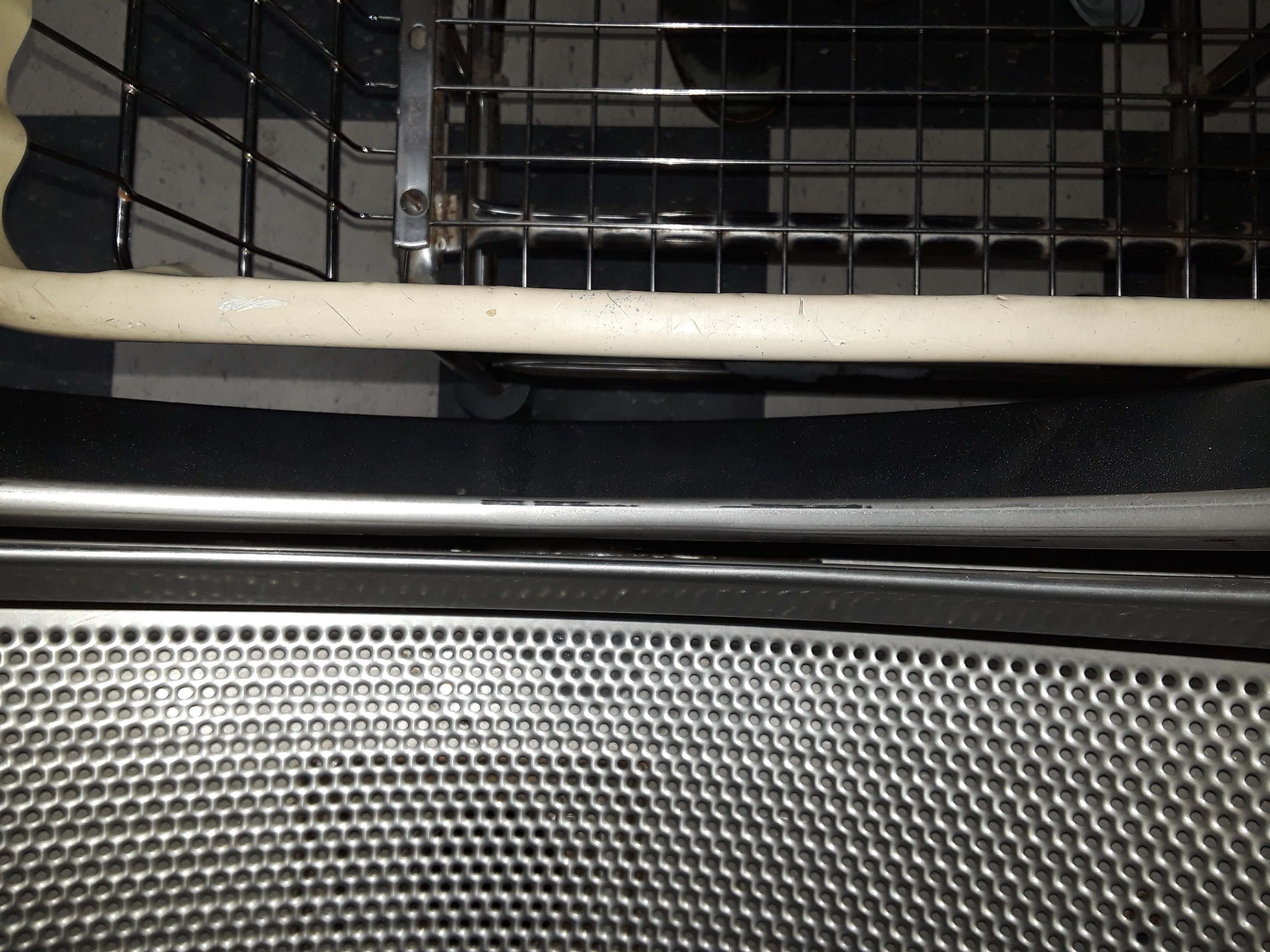 Note the Sock Drop Zone formed here. The tub is recessed with a weird black cone of shame, and as you unload, small items fall and don’t land in the basket. Every time I use one of these, I always wheel the basket away and find like three socks on the floor because they fell through this gap. Incidentally, on this design, anything that goes down the gap between the tub edge and wash basket edge there is pretty much lost forever into the drain sump. It’s a sizable gap about 3/8″ wide, but when the door is closed, the glass window makes it highly unlikely that any items will get near it. It’s more a hazard on loading and unloading, but will cause issues if the machine is overloaded with baby clothes.

So, why the weird sock eating cone of shame? I don’t get it. A fairly trivial change could be made to stop these washers from continuing their sock-dropping reign of terror, but it seems to have never crossed anyone’s minds over at Alliance.