Okay, stand back, this is a session of “Things That Piss Me Off”.

The indoor shopping mall was wildly popular at one time. It was convenient, it protected shoppers from inclement weather, but then it at some point felt dated, I suppose. What is the logical progression from something that’s practical, comfortable, reasonably accessible, and works well for most? Why, just take away all the covering, all the parking, all of the amenities and creature comforts, the rest rooms, the food court, and just build this concrete canyon fake “main street” with about ten parking spaces that you have to wait in line for and/or a $15 valet service. 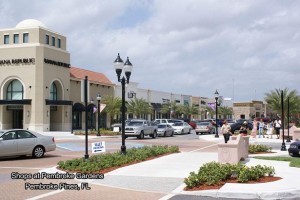 Parking and Transit: The first thing you will notice is that One Does Not Simply Walk Into YAFULC. Such centers are usually constructed in areas that are isolated behind one, or an intersection of two, enormous arterial roads that feature no pedestrian or mass transit access. They’re pretty much just plunked down wherever there was a bunch of cheap land available.

As you drive towards YAFULC you will usually be funneled down from a massive delta of entrance lanes into what looks like a small town’s downtown main street. However, unlike a small town, you will be sharing a small two lane thoroughfare with diagonal space on-street parking with about eight hundred sport-futility vehicles. Don’t be surprised if you get stuck in the entrance for half an hour while your exhaust and that of everyone else trapped there with you slowly gasses the shoppers — this is just part of the YAFULC experience.

Finally, you will hit a traffic circle with a sign directing you to parking. This will lead you to a very small lot that is completely full. In this case, whoever has the faster car wins in the hilarious race to dive for a parking space while trying not to mow down TOO MANY pedestrians.

Some versions of YAFULC feature higher capacity parking garages. These are universally arranged to be horrible puzzles, with tiny blind turns, entire floors reserved exclusively for certain businesses, or weird stretches of parking spaces that have been leased out to valet parking or auto detailing services. Don’t expect to find a space in the garage.

Usually there will also be a valet parking stand, where you can pay about $15 to have your car parked…… somewhere. There’s usually an hour’s worth of line to get to the valet parking stand, so who knows if they even do anything. Maybe they just take $15 from the first person who shows up and then just sit there all day?

Stores: Believe me, when I said you’re missing nothing… Okay, compare it this way. Do you have a Simon group mall nearby? The Simon mall has exactly the same national brand retailers that YAFULC does….. except with available parking, easy access, and you don’t get baked, frozen, rained on, or gassed with car exhaust as soon as you step out of a store. There are NO independent small businesses in YAFULC. This is almost universal.

Restaurants: You didn’t come here for the food, did you? Well on the off chance you were silly enough to do so…. Common fare at YAFULC includes a variety of overpriced national chains, but once in a blue moon, an indepdently owned restaurant does sneak in… usually a bizarre half-assed Asian fusion menu kind of place. 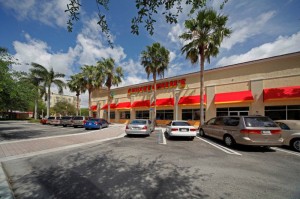 Common area: Open sidewalks are the norm here, with no shade, tree cover, or other amenities. Walking between businesses, you are always faced with the possibility of someone smashing you against the wall of the Chuck E. Cheese because they put their minivan in drive instead of reverse before jamming the gas pedal flat to the firewall. Some of the stores may have awnings but these are only there to break up the concrete monotony a bit – they provide maybe two inches of coverage off the building wall, if even.

Somewhere in there, located in a niche on the side of one of the buildings, there might be a restroom. Good luck finding it, I guess. I think this is just evidence that YAFULC was not designed for humans – robots don’t poop, or do they?

Typical YAFULC infections in the South Florida area include Kendall Village Center in Miami-Dade, The Shops at Pembroke Gardens, Boca Raton’s Mizner Park (which was originally a perfectly legit mixed use development before morphing into YAFULC), and Cypress Creek Town Center.

A special thanks goes out to developer Michael Swerdlow for creating Oakwood Plaza which is a hybrid “power center”/YAFULC, and has been easily the least successful retail development of all time; it consists of box stores and little strip mall buildings separated with giant parking lot spaces. It has been such a washout that last I heard, the management was considering charging a $4 toll for access to it to recoup some of their expenses. Let us never make this mistake again. Actually, the biggest mistake was made by the owners of Atlantis in closing down and selling the site to Swerdlow after Hurricane Andrew… they were not that heavily damaged!

4 thoughts on “YAFULC, Yet Another Fucking ‘Urban Lifestyle Center’”