Some stats came out that made me even more mad about the American Dream mega mall project. Developer Triple Five put out some rough stats on how they expect traffic flows to and from the mall, FDOT ran simulations on it, and what remains of The Miami Herald miraculously decided to publish an article about it with a useful infographic. (It’s very rare that the Herald will report at all on controversial development plans, and even rarer that they won’t just make the article a giant pail of whitewash.) 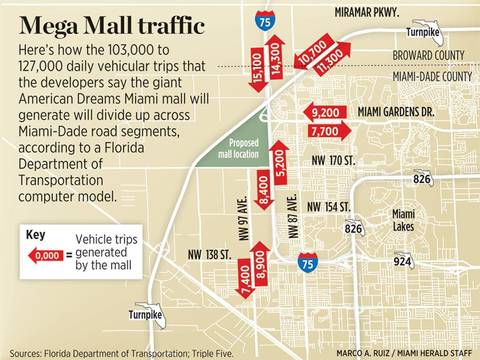 I’ve driven through this area a lot as a result of having a zombie strewn commute that required me to get creative to get home in the evening at all.

I can assure you the roads in this area cannot take the kind of traffic volume estimated here.

Common sense alone would have told anyone that the area just can’t support this beast. There is simply no way – no transportation infrastructure, no water, no power…

Is this just an elaborate investment scam?? I really, really hope so.

Otherwise, we’re really quite doomed, to be perfectly honest. Or at least those who have to do anything on the west side of Miami-Dade County or southwestern Broward are. I’m still lucky enough to have a reasonable excuse for mass transit that will get me to and from work without massive delays, but I suspect that those housing developments up in western Miami Gardens are very quickly going to become effectively unlivable due to complete lack of timely access.

This is so stupid as to be impossible to believe. This has to be a bad dream. A bad American Dream.

I salute…. the ashes of American flags.

One thought on “Common Sense vs. American Dream.”