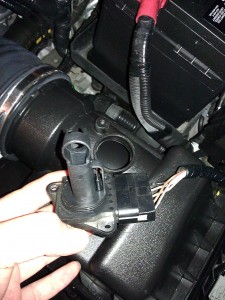 The MAF sensor is a device that measures the amount of air flowing into your car’s engine air intake and is used to determine the appropriate amount of fuel to shoot in to achieve an optimal fuel/air ratio. Incorrect MAF sensor readings, caused by contamination, can lead to loss of performance, fuel economy, or rough running. That being said, let’s begin! This will take only a few minutes and will most likely save you money on fuel when it’s done.

First, obtain a can of MAF sensor cleaner. Your local auto parts store should have it, and a can is probably good for 5-6 cleanings. Clean it whenever you clean/replace the air filter.

On some vehicles you will have access to the MAF sensor immediately upon opening the air filter housing. On others there will be stuff in the way and you’ll need to remove it from the intake line. It’s usually held in with two screws.

Step one: Remove the screws holding in the sensor and pull it out CAREFULLY – do not touch or damage any of its parts. Some sensors may have a fine platinum wire that must not be damaged or… well, you’re stuck buying a replacement for something that has a platinum wire in it. Gross. 😀

The pictures shown here are on a Mazda 6 with a 2.5 liter L4 engine; however, I’ve seen the exact same MAF sensor setup on many other import and domestic vehicles including Toyota, Nissan, and *some* Honda vehicles (they only recently started adding MAFs — many Hondas simply do not have one and rely instead on manifold pressure + throttle position to determine the flow rate).

Step two: Spray it down!

The spray can may come with a straw – you can attach that to the nozzle and use that, but do not stick the spray straw into any part of the sensor. Do not touch any small wires on the sensor or expensive problems will result. This sensor appears to simply have none. I’m not totally sure how it works, but the fact is, it doesn’t work well if it’s grungy. 🙂

The cleaner works very quickly but I usually try to spray it, let it stay soaked for a minute, then spray it down again to rinse. Repeat if you still see any visible contamination.

Now start up the car and drive off, you may notice an improvement immediately. If you don’t, you probably will the next time you fuel up.

A random tip: Track your gas mileage at http://www.fuelly.com and compare it to that reported by others to make sure your vehicle’s running well. 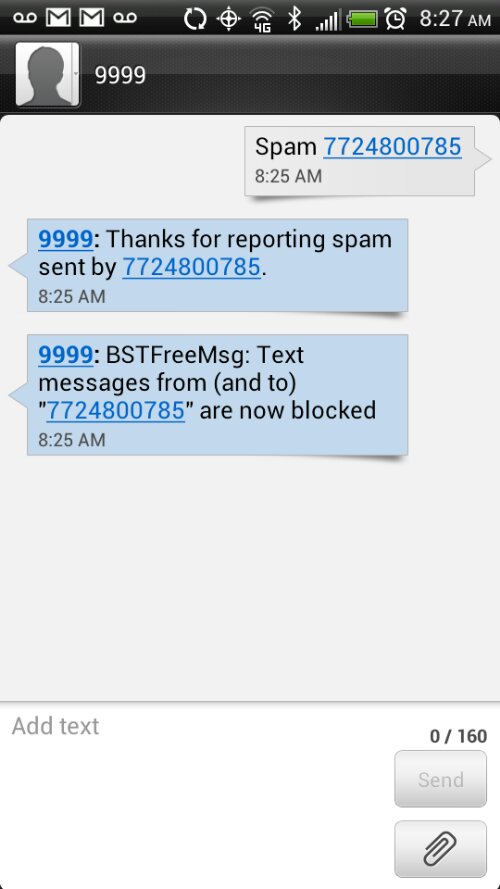 Anyone with a 305, 786, or 954 area code has seen this… in great quantity. You receive repeated SMS messages from some dickbag towing company that offers to buy junk cars, from one of a slowly rotating group of MetroPCS cell phone numbers. Well fear not, you can stop the spamming. If you are using the Sprint network, as a Sprint, Boost Mobile, or other Sprint reseller customer, when you receive one of these, send a message to 9999 with “Spam (originating number)”. The happy Sprint anti-spam robot will reply shortly.