Let me tell you guys about a magical time. The year was 2000, and we used this stuff called “paper”. There were no major delays at the polls. Upon arriving you would go into a short line based on the first letter of your last name; this was probably not even necessary at smaller precincts. Each line led to a poll worker with a book of authorized voters. They’d check your ID and give you a small tear out piece from the printout which you took to the next station to get your ballot. 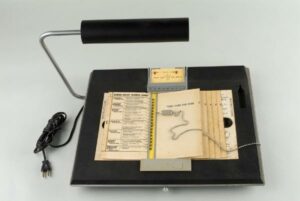 The ballot was a punch card; you’d take this to an ES&S Votomatic carrell which had a manual card punch with an attached stylus and a flip book that looked like the flip book inside a jukebox that tells you what songs are in there (let’s date myself even farther here). Punching the stylus through the hole caused it to go through the semi-prepunched “chad” in the appropriate position on the ballot and through a layer of rubber flaps. If punched fully, the chad should have detatched fully, or partially and gotten caught in the rubber flaps so removing the ballot will fully tear it away. If you messed up and punched the wrong hole, you took the ballot to a replacement station, handed it in and got a fresh one (you had to start over though). You then took the card out, checked it for correct punching, took it to the last station and handed it in. The whole process took MAAAAAYBE ten minutes from start to getting your “I Voted” sticker and walking out the door.

Overvotes were possible, leading to spoiled/partially spoiled ballots going right in the box if the voter was not careful.

Then Florida decided to be a little drama diva over a close margin of ballots that were made unreliable to read on the automatic punch card equipment because the punches weren’t complete (“pregnant chad”), the chad was still attached and the voter didn’t pick it off (“hanging” or “swinging” chad). People lined up in droves to drink the “ELECTRONIC VOTING IS PERFECT” Kool-Aid, despite the fact that this basically meant they were now putting their votes in a mysterious black box.

The current systems are comically absurd. They’re a hybrid of the worst and best aspects of both paper and electronic ballots. The sign-in process is needlessly long and involved, then you are given a HUGE paper ballot. The old Votomatic encouraged clear, concise writing on the ballot since there was limited space on its flip cards. The current ballots give unlimited space, even sometimes taking up an entire legal sized sheet for a SINGLE question. Upon filling out the ballot, you insert it in an optical scan machine which tells you “This is a valid ballot, press OK to vote” or “This ballot is spoiled, please replace it and try again”. It will not tell you HOW it read/recorded your votes, indicate any undervotes/spaces it failed to read (the old touchscreen systems we had from 2002-200? would display this on a confirmation page!), and the electronic reading is used to report the precinct’s count – the ballots are only retained for recount if needed.

Options that would have been great but were skipped in favor of electronic stupidity: 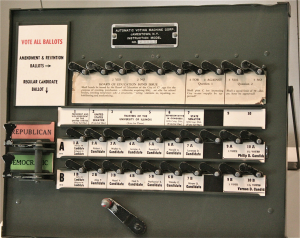 These are a truly ANCIENT, durable, reliable, honest technology; WHY were they abandoned? There was no spoiled ballot possible as the machine was mechanically interlocked. If you pulled a lever and changed your mind, you could pull the reset lever and start over. The final recording of your vote took place when you pulled a master lever that ticked over the internal counters for each checked space, and incremented the public counter. The whole machine was also interlocked with its privacy curtain; you had to pull the curtain closed to unlock the machine (noisy!) and once you voted, the machine would respond to no further input until the curtain was reopened and closed again – this would allow an alert poll worker the ability to see if someone was trying to vote more than once.

* Voting by mail: Oregon currently does it. While it’s not free of problems, it is VERY convenient and would lead to much better voter turnout.

* The original ES&S Votomatic with improvements: There was a briefly considered option for Votomatic + optical scanner on the ballot box. The ballot resulting from a Votomatic vote was not easily human-readable. The optical scanner would have told you if your ballot was valid or not (outright rejecting an overvote where conflicting options were punched) and could have also been set to warn of undervote. (It’s probably rare that people have a vote for EVERY option on the ballot; I certainly don’t most of the time.) In addition, a cleaning mechanism on the Votomatic punching station and a lamp shining up from below would be good improvements — the cleaning mechanism could be cycled by each voter to ensure that the punched chads were cleared from the space below the eggcrate punching grid (this was cited as a problem in some busier precincts when the chads stacked up and jammed the grid). In addition the bright light would shine up and illuminate the hole in the grid as soon as the voter punched the card, for visual confirmation. Everything Old Is New Again. If I can get my hands on a drill press and some acrylic sheets I’ll whip up a prototype to illustrate how it could be, in an ideal world. 😉