A friend of mine posted a link to this on Facebook and it is literally one of the worst designs for anything I have ever seen.
Straight from the Walmart online marketplace, right next to the counterfeit Duracell batteries…

It’s literally the worst designed ear piercing gun I’ve ever heard of. Of particular note though, the description suggests it can also be used on the nose or navel. How? No, don’t. Just don’t. On anything.

A little background on how these things are supposed to work: The tip of the stud (not seen anywhere in the description photos) is pointed. Not really all that sharp, but pointed. The butterfly back of the stud earring is placed in the other end of the gun and it’s driven by brute force (this one appears to use a spring) through the earlobe.

The most common place you find these things is in kiosks and stores in the mall. Claire’s uses a variation made by Studex and theirs has a disposable sterilized plastic cartridge that goes at the end. The gun itself can never be fully cleaned or sterilized, but at least most of it is not in contact with the person it’s used on. Thanks to this, infection caused by bloodborne pathogens left on the gun itself is at least rare. The complications caused by the body trying to heal a rough bruised hole created by jamming a somewhat dull metal stud through, that’s another story. This one, uhhhhh….

On this design you just get a little stack of steel plates with a notch in them. The outer one is bent to hold the butterfly back of the earring. Sort of. I can’t really imagine how it keeps it lined up such that the stud will align with the hole in the end – chances are better it just kind of crashes into it and either further tears the hole by skewing at an angle, or launches the backing into space.

But it’s not covered with any sort of disposable part…. and it couldn’t even be effectively wiped down to clean it because it’s got all those gaps between the plates. 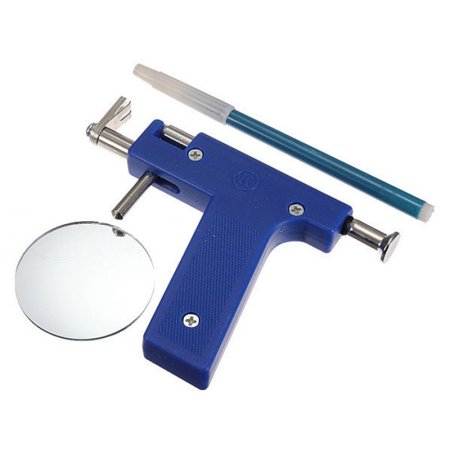 A felt tipped pen and a magnifying glass are also included for your convenience. I can’t even understand why, as there’s no logical reason this thing should actually make the hole where you want it to land.

It should be no secret that I think the ear piercing gun is one of the worst products of modern misengineering, but this just… this deserves some kind of award. This is BAD and whoever designed it should feel bad for it.

Yeah. Do yourself a favor and go find a member of the Association of Professional Piercers if you’re looking to get any sort of piercings and want the process to go as well as possible.

And do beware of the utter bullshit that shows up in the Walmart “marketplace”. Same goes for Sears. It’s all the ecommerce equivalent of the Opa-Locka Hialeah Flea Market or something.