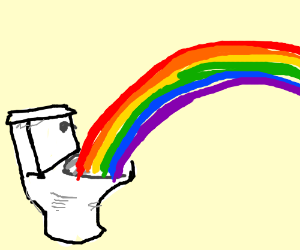 Florida was just called for Trump. The Hillary Clinton campaign had stated they don’t *need* Florida to win, but that makes the results even more uncertain since Florida has a big heaping slug of electoral votes.

The future of the US economy even rides on this shitshow of an episode of election theatre.

If Trump wins, it will be a massive blow to… pretty much everything. If Clinton wins, it’s hard to say what will change. Sure, she’ll be the first female president, but it’s hard to say if we’ll notice anything else.

I probably don’t get to go home tonight (or will it be tomorrow?) until we know who we have as a president. Now, one interesting thing I noticed— I went over into our breakroom where the television there is tuned to another station, the local ABC affiliate. (It’s usually just left there so some of our employees can watch daytime soaps on there). They were speaking on there about the results of some very interesting polls – not as to who someone would choose as president, but rather, whether or not they hold any confidence in their current system of government.

The results were pretty much a resounding NO.

Oops, I guess not everyone likes oligarchy, unless they’re on the rich side of the wall. (Sorry, Drumpf, I will never forgive you for your desire to wall off Mexico.)

In the end— does it even matter who is elected president? No matter what, we will still wake up tomorrow in a system of oligarchy. Both houses of Congress will be dominated by the GOP. The sun will still rise, but at least we didn’t lose our ability to catch it on solar panels. (Florida Amendment 1 crashed and burned, good riddance.) The tolls will keep rising, well, exponentially faster.

Medical marijuana was approved in Florida. We’re going to need it. Actually, at this point, we need to go ahead and approve recreational because we REALLY need that. If we grow it domestically that will probably be our one remaining reliable industry. 😉

At this point I think it’s not worth worrying over who gets the presidency as much as how we’re going to deal with the Republican House and Senate. The GOP has historically been associated more with rule by the corporation, not by the people. They were opposed to, and responsible for watering down, the Affordable Healthcare Act.

I made the mistake of turning on a ham radio earlier today and … regretted this within minutes. I decided to suffer through the pain and listen anyway. The usual concerns came up – “they’re gonna take away our guns!”, “lazy people on welfare are destroying everything”… I get the feeling these voices will change very soon upon a harsh reality check as the world’s economies start to… “adjust” more heavily and the BEAUTIFUL new plans for privatized infrastructure optimized to serve the rich start to kick in.

To summarize my predictions:

This session of angry posting shall terminate now as the boss is behind the rack next to me.