Somehow I don’t think anyone will mind that I didn’t call extension 6218. 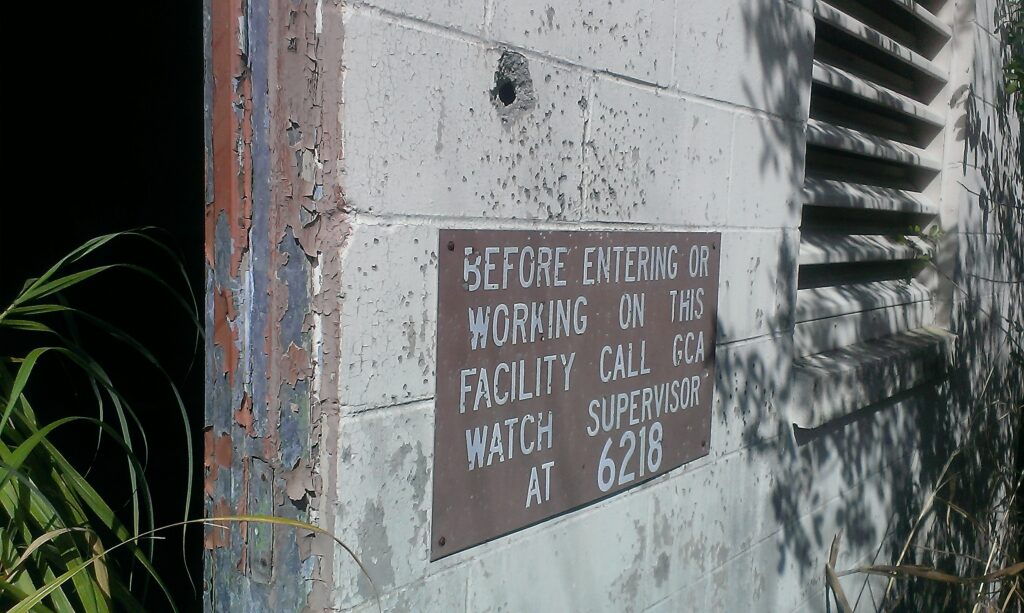 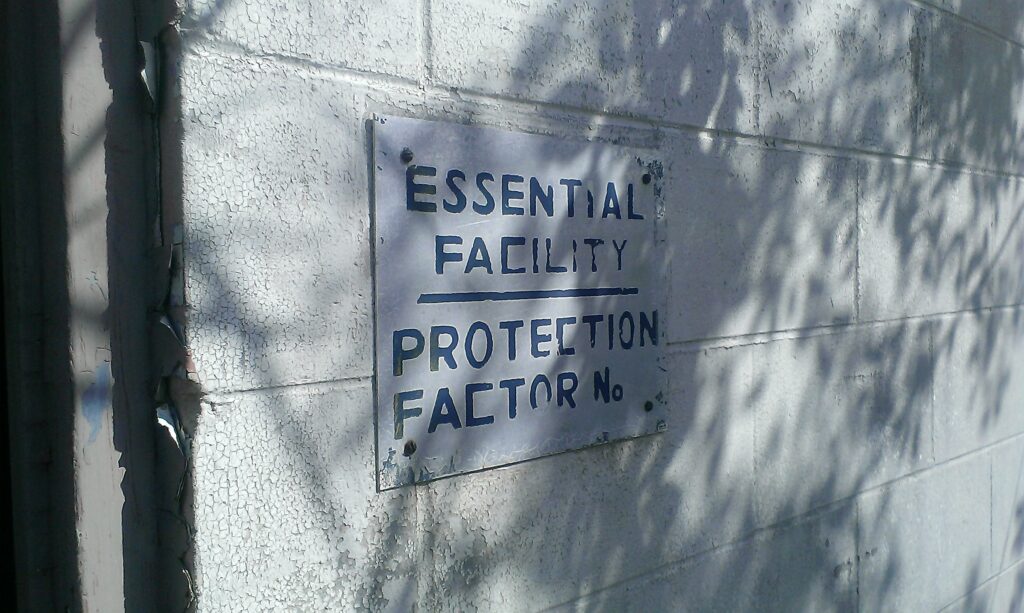 Now, one glaring silly omission: I didn’t take any pictures of the outside of this building. The reason is, it’s all overgrown and just kind of slowly disappearing into the brush. Plus, it just kinda looks boring outside. Plain beige concrete little building with a brick smokestack. (The smokestack is NOT connected to the gen stack below.) Nearly everything’s been scrapped out of this site. Boo. 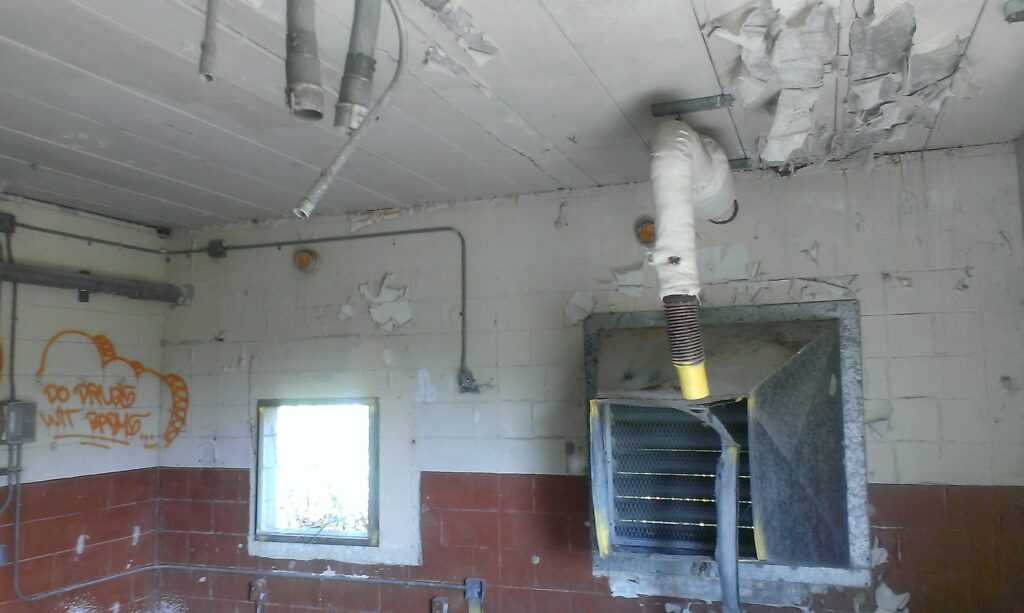 First thing off to the right is a generator room, it had pads for two generators. The stack (ASBESTastic?) just goes out through the wall to a scupper. 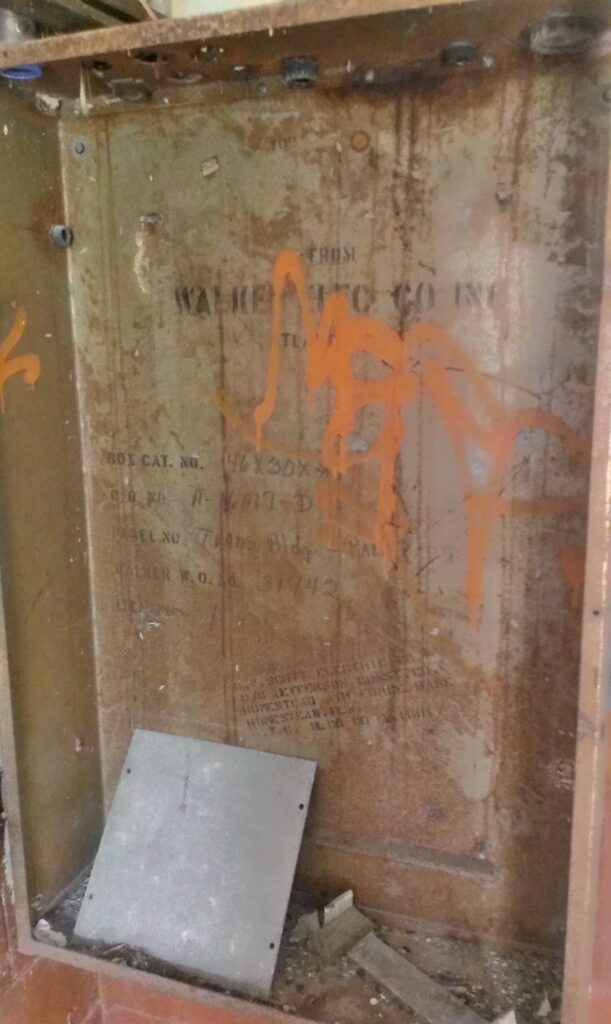 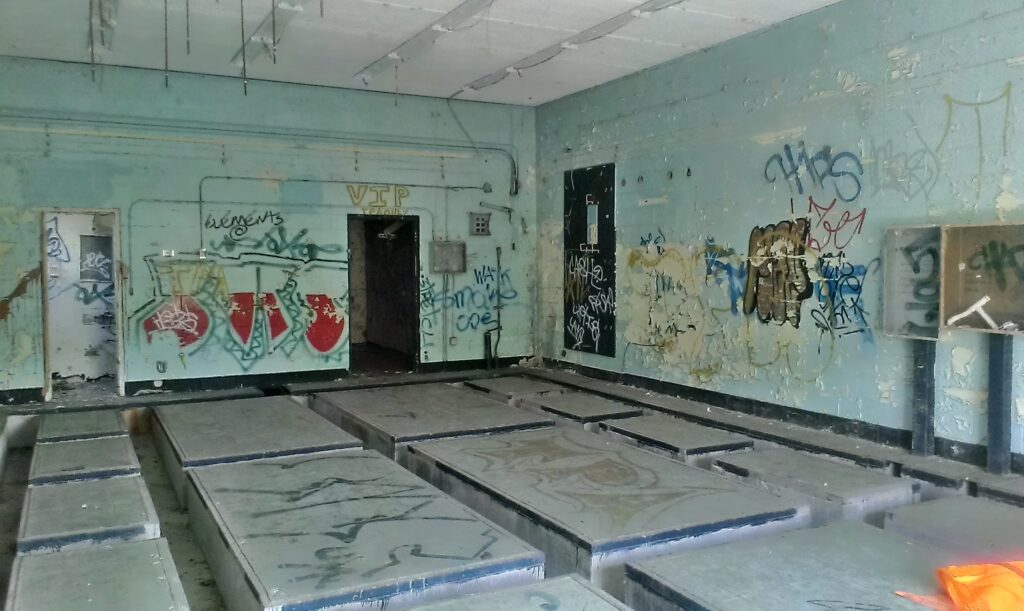 The main room. The trenches would have accomodated wiring and would have been covered with some kind of plates so you don’t just fall down them. Here’s a detail of one, they’re about a foot and a half deep and some of them terminate in pipes leading out of the building. Note the floor tile’s all still QUITE INTACT. 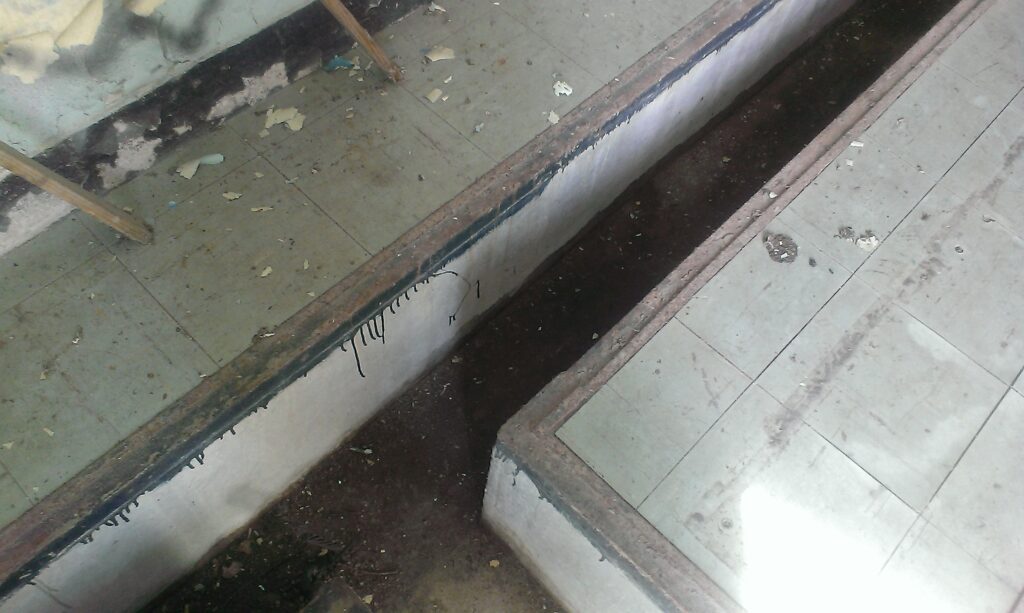 Above, you can see two doorways at the back of the main room. What follows is the one to the right. It’s kind of a featureless room, it’s been dubbed the Tripy [sic] Room. 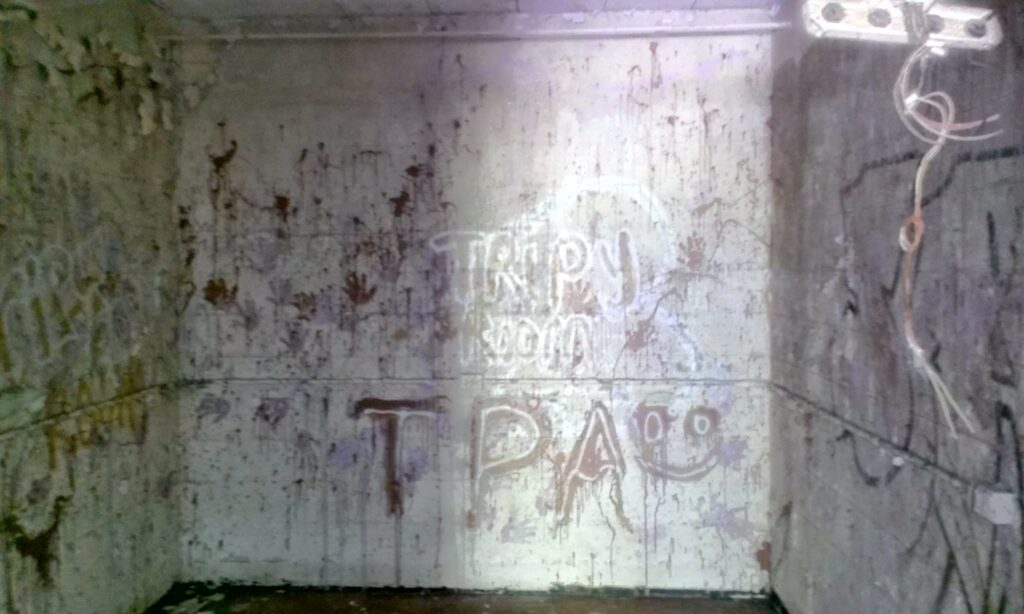 To the left: the loo. It had a VERY small closet to its right. 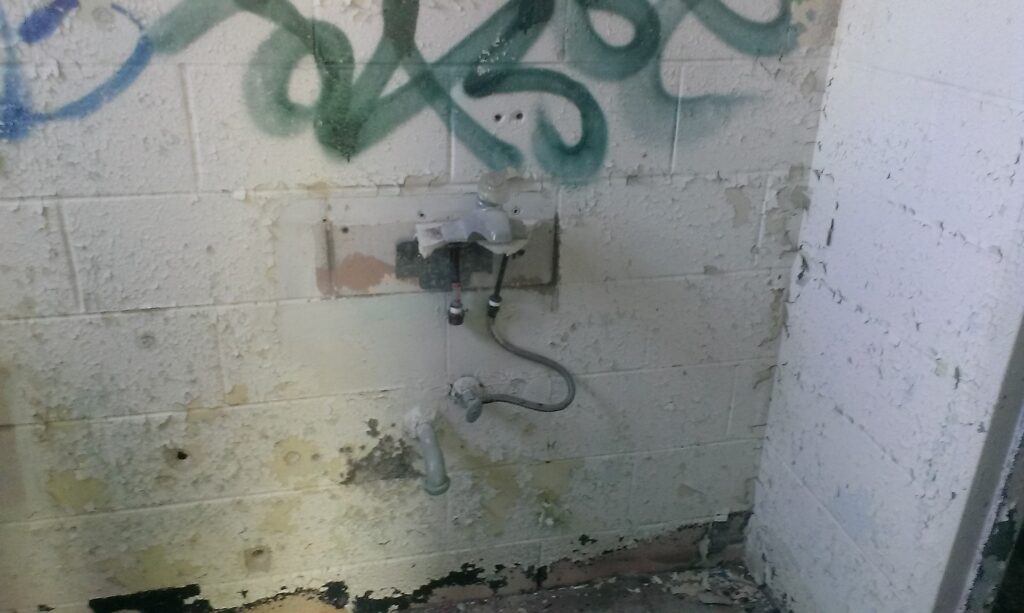 And now… I’ve seen other people’s photographs of this building. So far I’ve seen everyone say it just has two rooms. Well, I was not convinced, especially because I could not find anything that would have attached to that cool brick smokestack. I poked my head out that window in the generator room and looked over and saw an additional doorway to my left. The area around this thing was so overgrown that it took some serious squeezing through and stomping… then I found an old transformer vault.

It is worth noting this site was abandoned immediately or shortly after Hurricane Andrew delivered a devastating punch to this area. No power poles or even remains thereof were visible anywhere nearby. Needless to say these cables have not been energized in a very long time. The fuseholders are on the right; there were no transformers or other equipment remaining in the room. 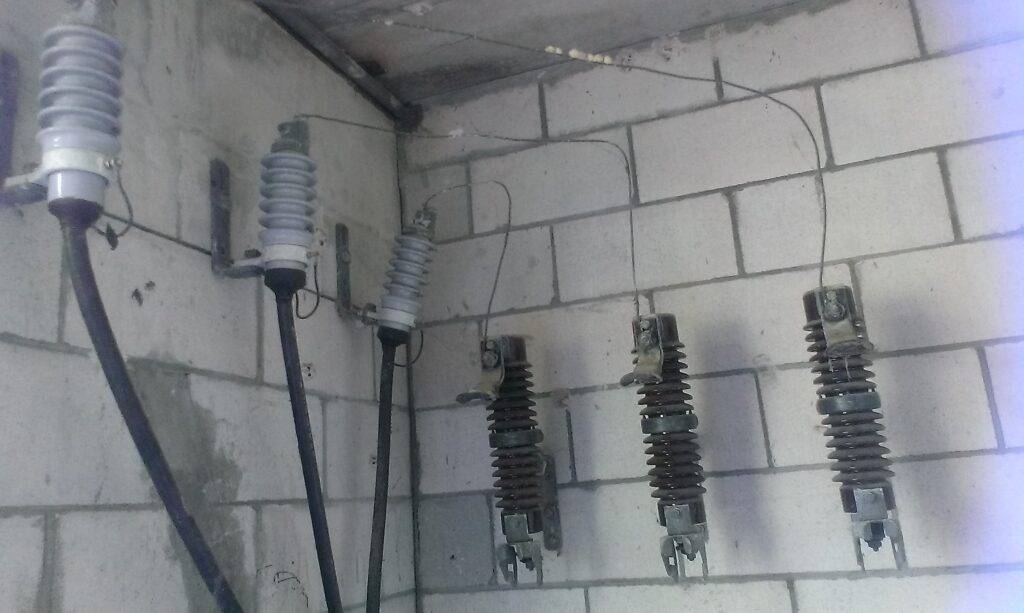 I continued onward, the underbrush got thinner here due to shading from an overhang on the building depriving it of light. The next room was apparently a mechanical room which appears to have housed a water heater, contactors and electrical panels for the air conditioning, and yes… that cool brick stack.

Here’s some of the wiring. I’m not even sure what to make of this — it looks like natural latex rubber covered in some kind of fiber? I didn’t touch it because I’m aware of some older wiring that was used in buildings being asbestos over rubber. Nope. 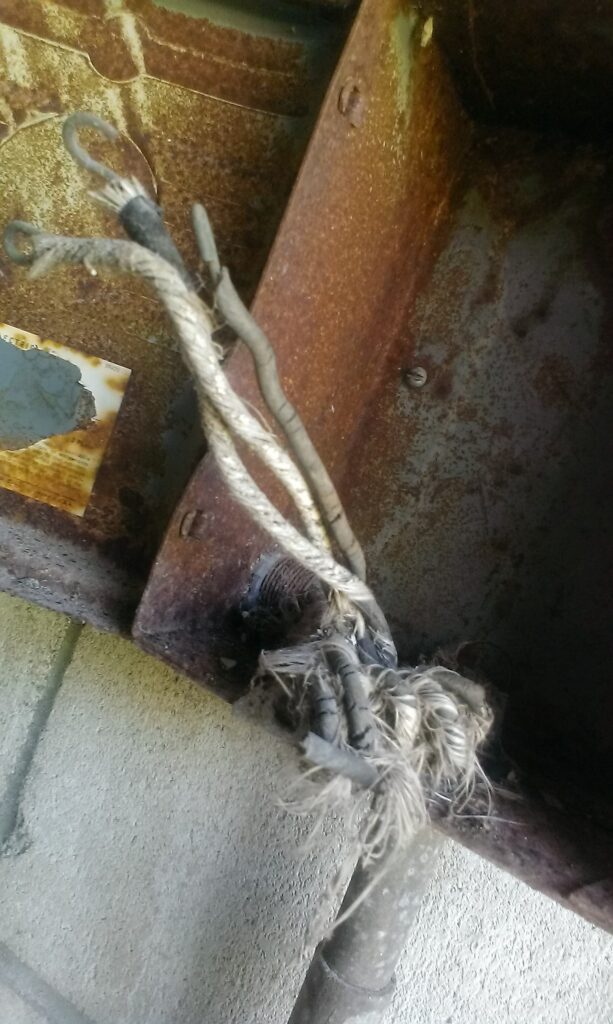 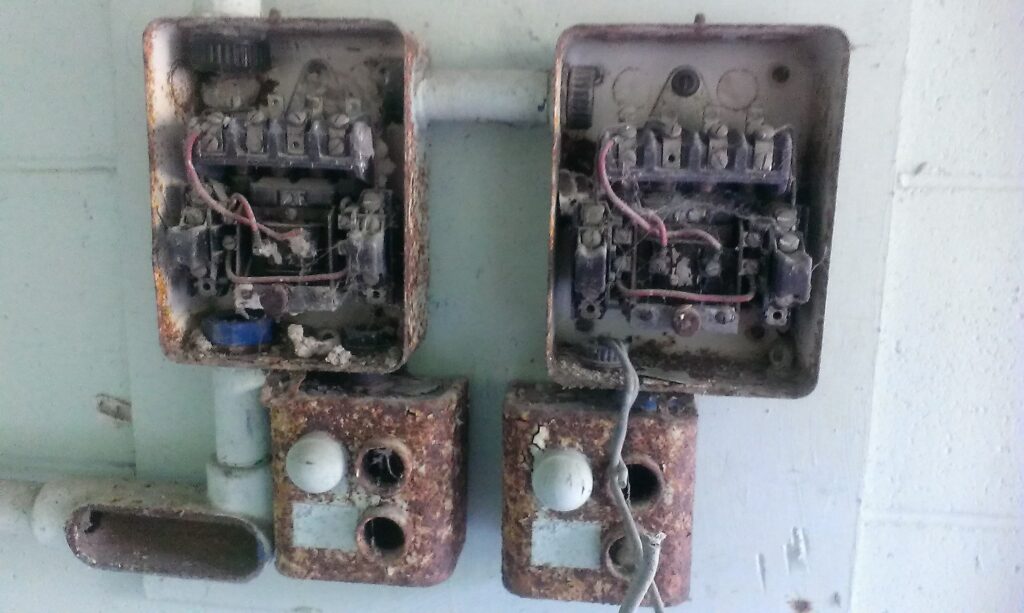 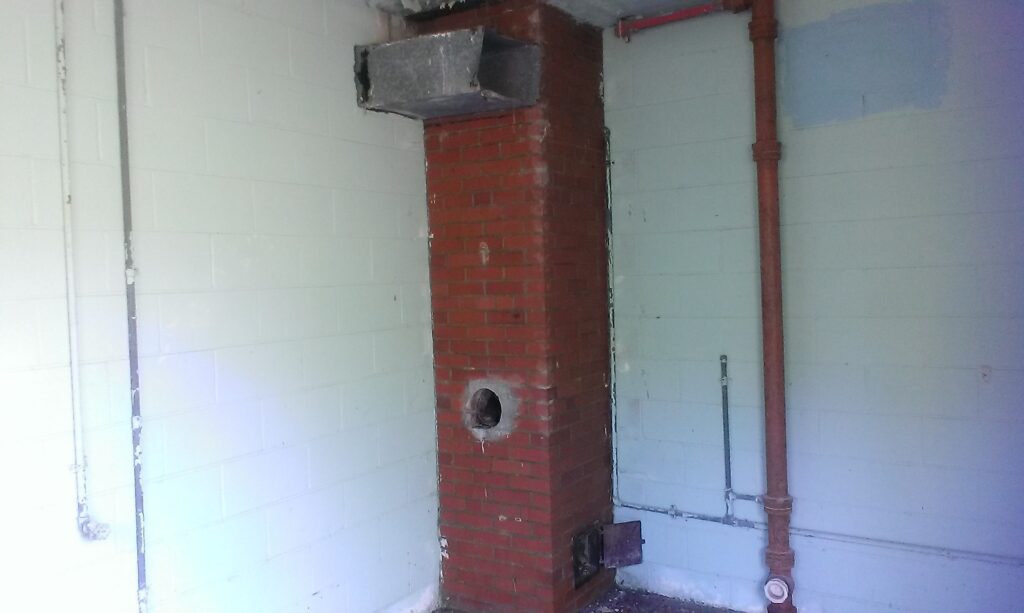 No traces remain of whatever was connected next to the stack. There were no electrical wires or pipes or shadows thereof in this area. The pipes on the back wall went to the sink and toilet on the other side. 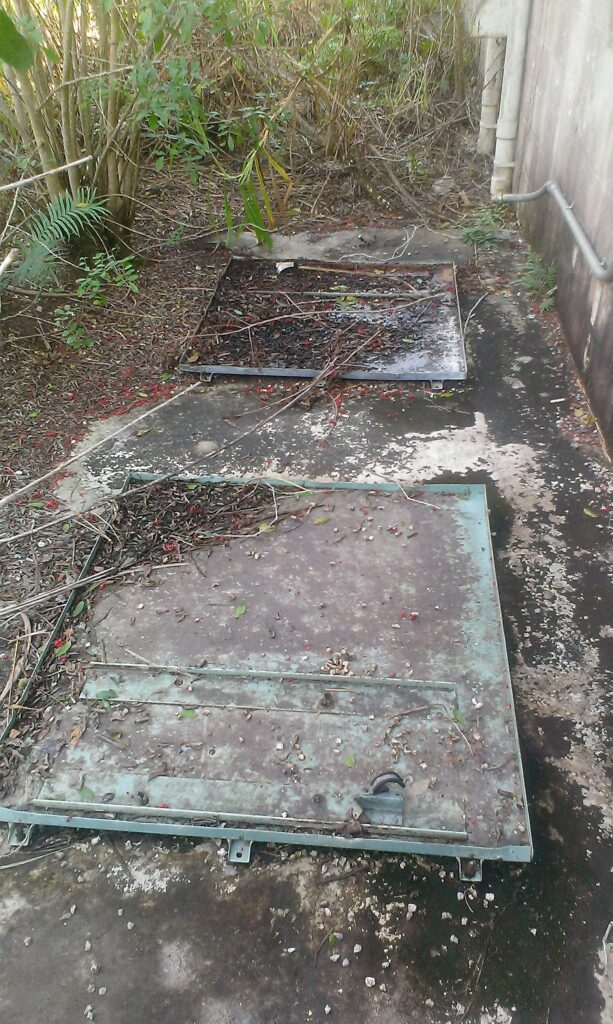 The bottom plates are all that are left of the old A/C condensers out back.

There you have it. Nothing groundbreaking… but I couldn’t put up with not knowing what was behind that wall and what connected to that cool brick smokestack.

I’ve seen this building referred to as the Homestead Air Force Base Communications Annex. There is a NEW communications annex on the base which was completed 2004. Two circular structures can be seen adjacent to the building in aerial photography. This is two years after Andrew: 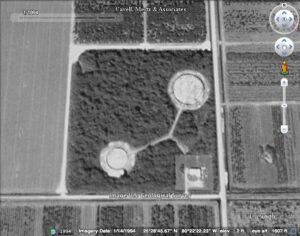 What will the future hold for this site? It’s doubtful anything will change any time soon. It’s probably gonna just stick around until the site either gets cleaned up to use as a farm or gets rolled under for development. The sprawl is starting to get pretty close by now.

Looking at the way this building was set up, I get the feeling it was not a constantly manned site. The Tripy Room was likely a tool/supply room or workshop, and the single, tiny restroom suggests there was never a particularly large team of people working there. Perhaps someone remembers what took place here decades ago?