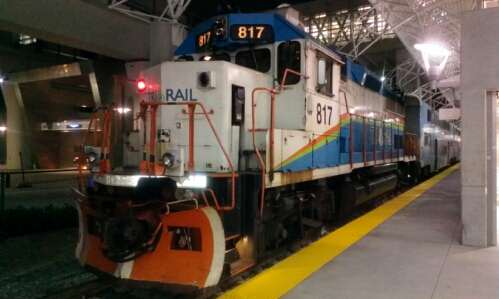 I kind of have a sixth sense thing going on when it comes to engineering. Everything around me gets pretty severely disassembled, at least in my mind. The first time I saw one of these, my sixth sense was NOPEing hard. I was baffled. Why did they do this?

So this is a General Motors Electro-Motive Division (EMD) model GP49. It pulls or pushes things on rails. They were made for the Alaska Railroad and contain a radar guided wheel slip detection/control system for use in icy conditions.

Here, they’ve been made to do a very inappropriate job, and all of us are suffering from the resulting failures.

First, these units have two cooling fans for the engine, one for the dynamic brakes (resistor grid used as an energy sink, using the motors as generators). Normally, a locomotive of its size would have three. 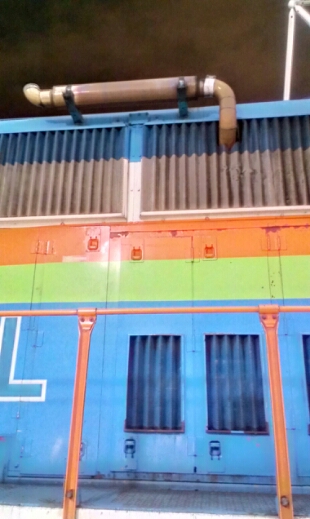 Above: radiator air intakes. The fans are on the roof below them.

Passenger train cars use head end power (HEP) supplied by the locomotive to power lights, air conditioning, cooking equipment for dining cars, etc. This is usually a 480 volt ac 3 phase circuit. The GP49 did not come with a HEP generator so a separate engine/generator pack was added below the radiators and these air vents were popped in to wash cold air over it and keep it from roasting.

Only problem, oops— this allows a lot of air to bypass straight to the exhaust fans without passing through the radiator.

The hot engine alarms and shutdown kick in. A lot.

Currently it is not uncommon for Tri-Rail to run two of these units together, one with only the main engine active, and one only supplying HEP. This reduces the heat load and usually prevents the whole thing catching a fever.

Now you may have seen me mention a radar.

On smarter diesel electric locomotives, there are protection systems in place to deal with wheel slippage. A speed sensor is usually provided on each axle. Analog or digital electronics will test the wheel speed and compare. If one or more axles are spinning too fast, indicating a slip event in progress, corrective logic will activate, reducing the amount of current available to the traction motors by cutting the main generator field current, and possibly applying sand to the rails to make things grip again.

With the GP49, the logic goes a step further. A radar detector actually measures the speed of the train moving over clips and plates on the track.

The idea behind this is that a wheel slip event affecting all wheels can be detected and corrected.

The only problem here is that this system is a little too paranoid. It won’t let the kilowatts flow until it sees the wheels all turning at the right speed to match the radar reading, and it only allows for very slow takeoff.

As of late, either due to updates to the control systems or (convenient?) equipment failure, this seems to be disappearing on the GP49s and they actually…. move.

The overheating problem is still there and very bad, though. Yuck.

How could it be corrected? This would be a tricky one. My best ideas would be to add the third fan, or otherwise increase airflow. Perhaps add a baffle under the radiator and open up the area below to more air for the generator? This one’s gonna be tricky due to the narrow body of the locomotive.

Or just completely reverse the hep modification and place the generator in a separate power wagon? I seem to recall Amtrak having done that.

8 thoughts on “The Tri-Rail GP49 mod, and where it went wrong”