I’ve always had a soft spot for the way Icom designs their mobile ham rigs. See, someone at Icom realized that hams are ridiculously longwinded and will overheat many commercial grade radios made for the typical 5/5/90 duty cycle (5% TX, 5% RX, 90% standby) easily… so they designed most of their radios with giant passive heatsinks integral with the exterior chassis of the radio. On some of their radios there is a small cooling fan at the back that pushes a little more airflow over the chassis if needed. I used to have an old IC-229H which just had a huge passive heatsink at the back, and there’s an IC-2100H in my parents’ car that just does the whole case/heatsink thing for cooling. 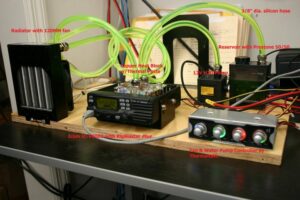 Unfortunately someone, in the process of building an Echolink node around an IC-V8000, thought they needed a bit more cooling and then this happened…

I don’t entirely understand WHY this was done — the radio has a very large heatsink of its own… or HAD a very large heatsink of its own, as it may be. It’s a 75W radio and could easily be turned down to mid or low power to further reduce heating problems without doing… that.
The images were found on Facebook and I’m presenting them anonymously to protect the guilty party XD
Shown below is an unmolested reference model: