I hate cars. They’re just giant expensive pieces of cost-engineered crap that cause horrible anxiety. Apparently, the service manuals for them pile confusion on top of that as well.

I don’t know WHO this diagram was designed for, but it was clearly not to be seen by human eyes and minds. OUCH.

From the factory service manual: 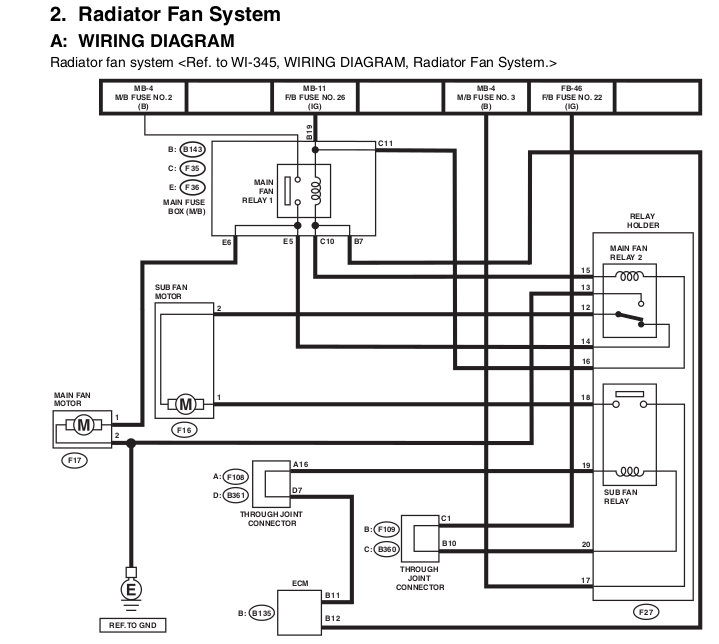 I redrew it to make it easier to understand and follow. The scanner in my office doesn’t understand the orange I highlighted the wires that should be energized off +12V ignition switched and turned it kinda beige-ish. Whatever.

I omitted the “Through Joint Connector” points shown here. I have no idea what those physically are – my best guess, being that I didn’t see a bunch of connectors in the circuit, is that they mean those are internally connected on the ECM harness plugs or in the fuse/relay holders.

Fuse F22 is a horrible mystery. Check it for yourself – the factory schematic suggests that the ONLY thing it powers is the “Sub Fan” relay coil, not the actual fans themselves. Why? Actually WHY ANY OF THIS???

In general I have a love/hate relationship with any cooling fan control system that incorporates a low fan speed for pretty much no good reason, and by that, I mean, I love to hate every single one of them. I’d rather hear a single loud fan cycling on and off than knowing that the whole control system is a ball of spaghetti wrapped around a meatball of ticking time bomb complexity. I also love that when I was trying to figure out how this works (the manual doesn’t really explain it) I found that there’s a reasonably useless possible state for the system of running one of the two fans. 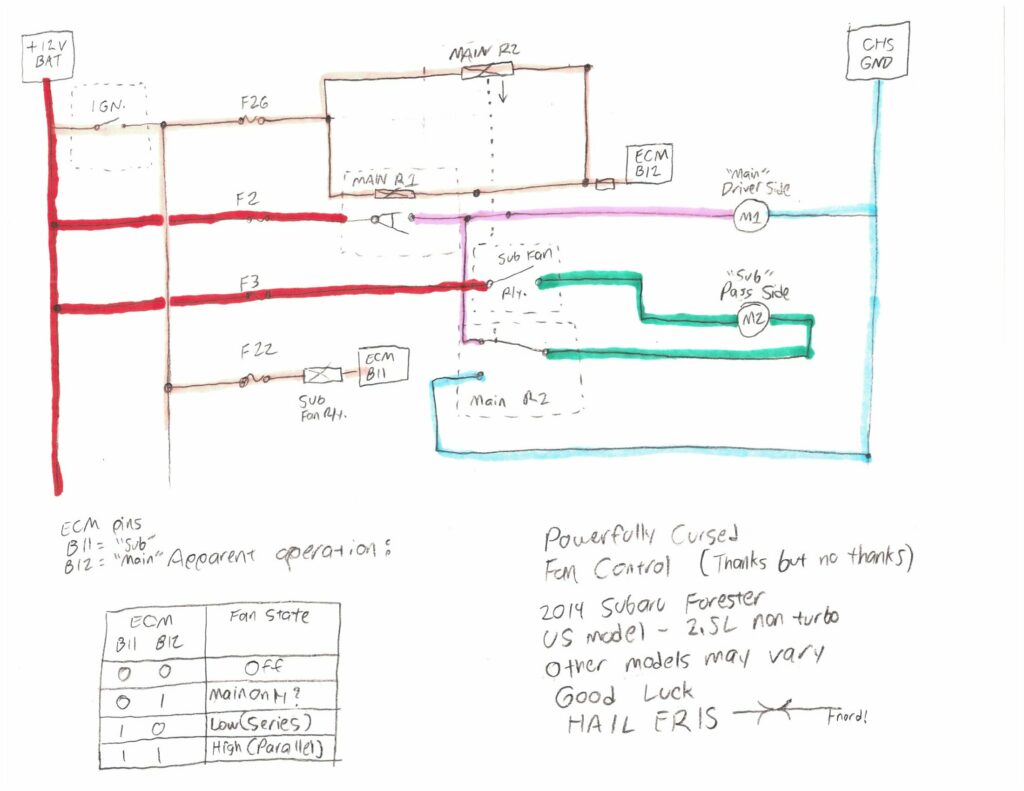 I’m having an issue with one of the relays causing one of the fans not to spin. Specifically, it’s the “main” fan on the driver side, suggesting an issue with Main Fan Relay 2, which I was able to get the cover off of and look around inside… it looks like it’s gotten hot and both contacts looked pretty raunchy. It is not the logic state that you’d get to if the ECM were to ground pin B12 and not B11, which would cause the main fan to run only, at high speed.

So here’s the adventure so far—-

I’ve been through one radiator fan which might not have even been bad in the first place, though it spins kinda rough and probably needed to be changed even if it WAS functioning (that being the case, it may have been drawing too much current and pitting the relays).

Pictures from this silly adventure ahead (let’s keep this post from making the main page a kilometer long!)
The first symptom of any issues were weak air conditioning at idle or when stopped. I didn’t really suspect the fans as I did hear the sound of a fan running at high speed. Well… turns out I think I was hearing only one of two fans running at high speed.

Then the A/C refrigerant decided to fly the coop just before some 115 degree weather rolled in, and the engine started running hotter than usual. Uh oh.
The A/C leaks were both on the compressor discharge side. The O-ring where the discharge hose slips into the compressor was totally trashed and held vacuum, but not pressure – trying to recharge the system led to about an ounce of R-134A hissing forth from this joint. The other leak was the discharge hose itself which was pleasantly quick to order from RockAuto.com. I chose the DHL “3-day” express shipping and it arrived next day instead – I’ll take that. 😀

Unfortunately, this is just about the only part that was easy to obtain.

The Subaru Forester over its model years has used a few different cooling fan arrangements. It’s got a flat four cylinder “Boxer” engine (Subaru calls it an H4) mounted longtudinally. On many vehicles, this allows the radiator and condenser to be cooled by a fan mounted either to the front of the crankshaft pulley, or to another pulley driven off a belt. Subaru chose to make the nose of the Forester as low as possible, leveraging the advantages of the Boxer engine’s short stature, so there just wouldn’t have been room for an engine driven fan of sufficient diameter. I think all of them have had two fans side by side, with some earlier models having dissimilar fans. This one has two MOSTLY identical fans (differing only in the mounting shroud).

The “Main” fan is on the driver’s side (may be the passenger side on a European model?) and the shroud incorporates the hanger for the coolant bottle. If you have to remove this no tools are needed yet – just pull the single hose at the top leading to the radiator cap collar, unsnap the retaining tab on the fan shroud, rotate the bottle backwards a little to clear it, then lift it free of the post and hole at the bottom. I didn’t have to remove any parts other than the coolant bottle before removing the fan. Removing the fan itself (COLD ENGINE PLEASE!) was just a matter of reaching down to unplug the electrical connector, removing two bolts at the top with a 10mm socket, and lifting the fan out while squishing the upper radiator hose a bit to clear it.

And if you need to replace one of these fans, uhhhhh. Good luck.

Supply chain issues have made electrical parts REALLY hard to source and the fans are no exception. I tried RockAuto, Napa, O’Reilly Auto Parts, eBay, and Amazon – out of desperation I’d be perfectly okay with using a weird Hong Kong dumpshit replacement but even those are long gone.

I called up the parts department at a couple of the local Subaru dealerships and they also lamented the same thing. One of them told me that their ordering system showed them that a dealership in Nova Scotia had one of the fans, but they wouldn’t sell to US customers.

I managed to get both fans from a wrecked Forester at a local auto recycler and I’m pretty confident at this point those are the last ones there are to be had for the next few months at least. This is me looking triumphant at some point before the heat exhaustion kicked in. I got stuck in traffic for over an hour with no movement at 98 degrees and that pretty much ruined the rest of my day. Also, I guess this is before I got the inadvertent Harley Quinn look going on with my hair. 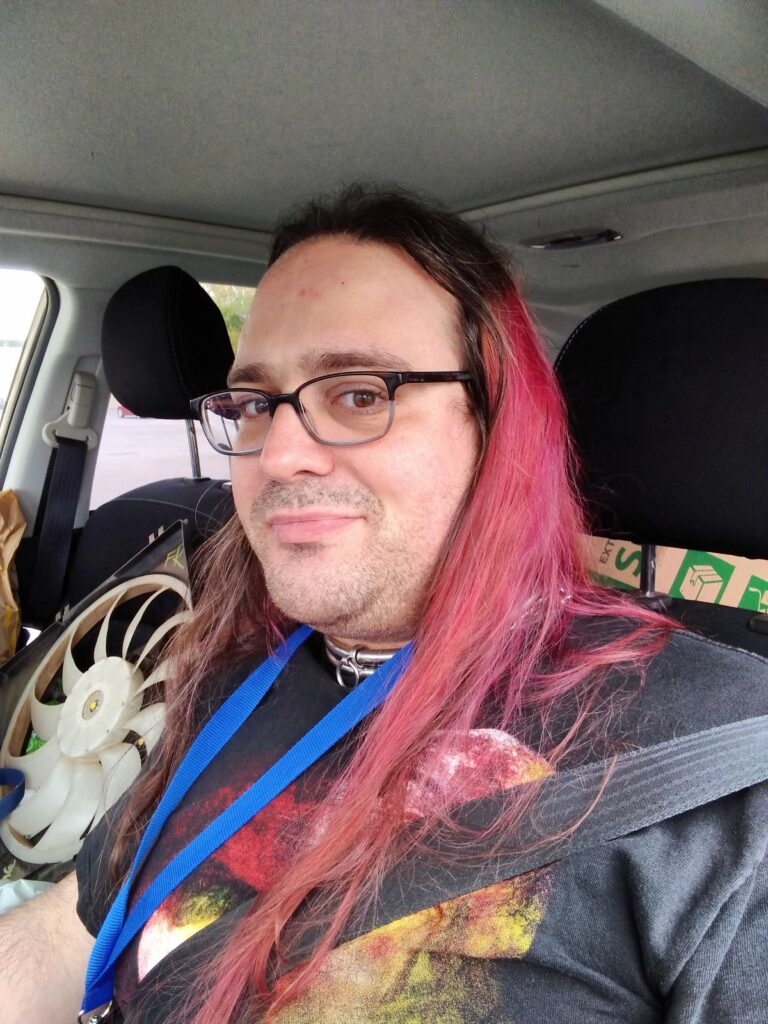 Changing out the fan led to both fans running for a brief period of time, but then the “Main” fan on the driver’s side stopped again.

I remember observing some nonsense behavior from the fans while charging the A/C system, notably, the low speed not working, then only the passenger side fan starting on high speed, followed by the driver’s side fan starting. This isn’t a valid operation state of the system unless the “main fan relay 2” isn’t making good contact.

The relays are almost completely unobtainable right now. The parts houses have the “Sub Fan” relay which is just a SPST relay and is used in a lot of other places including for the headlight relay, the a/c compressor clutch relay, fuel pump… probably others too. As for the Main Fan 2 relay, which is a single Form C contact relay with a weird looking contact arrangement, it appears to be available from literally nobody in the western hemisphere. I bought a kit of crimp terminals and generic Bosch-style relays with bases to make a temporary bodge until I can get the real thing again. 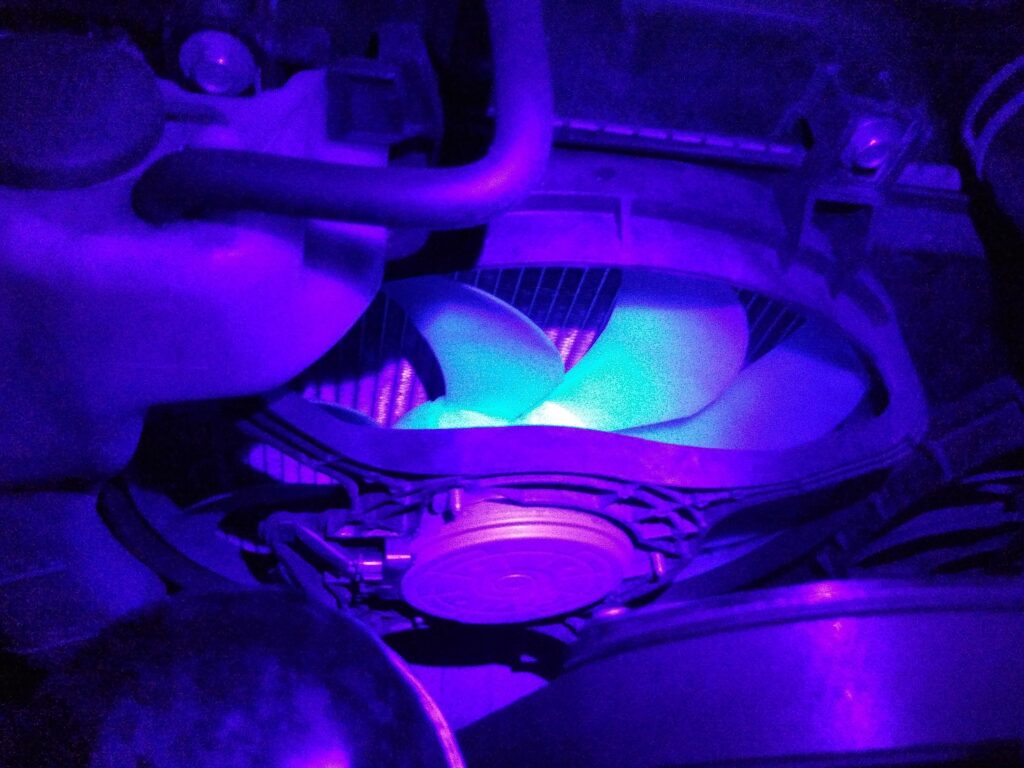 Apparently, the fan rotors glow under UV light. At first I had feared I was seeing that it had gotten stained with UV leak dye from the A/C system, but then I checked the plastic of the “new” fans and they glowed too. Ok then. 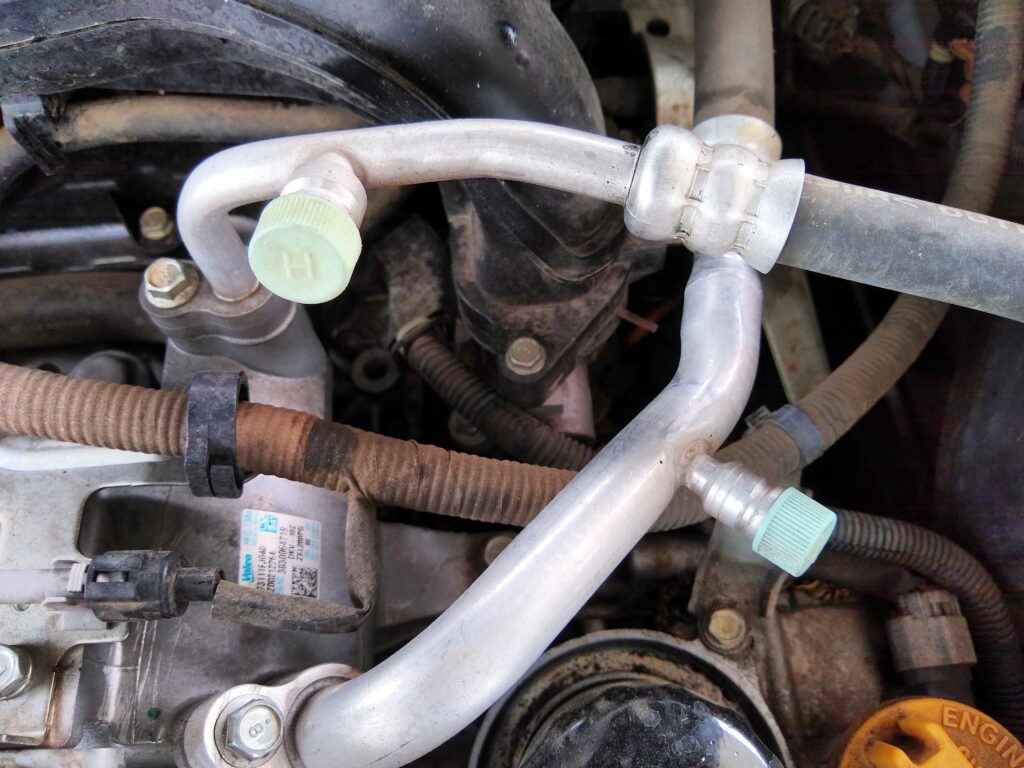 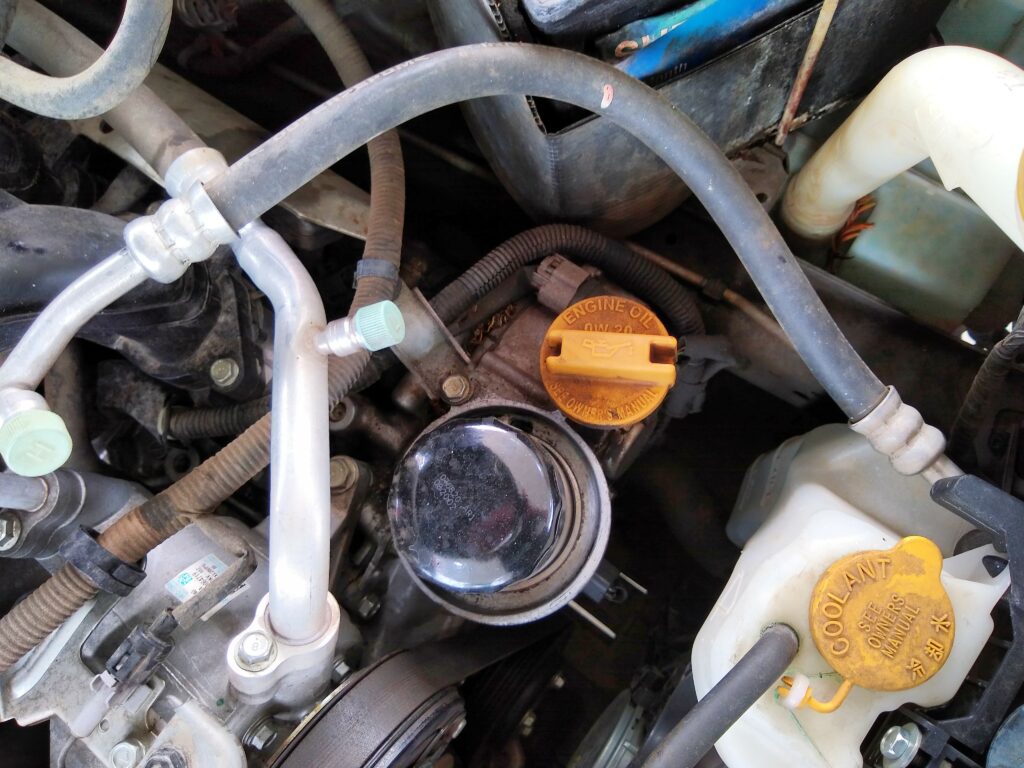 The old discharge line before I’d replaced it. The only part I had to remove to get at the condenser end, refreshingly, was the coolant bottle. 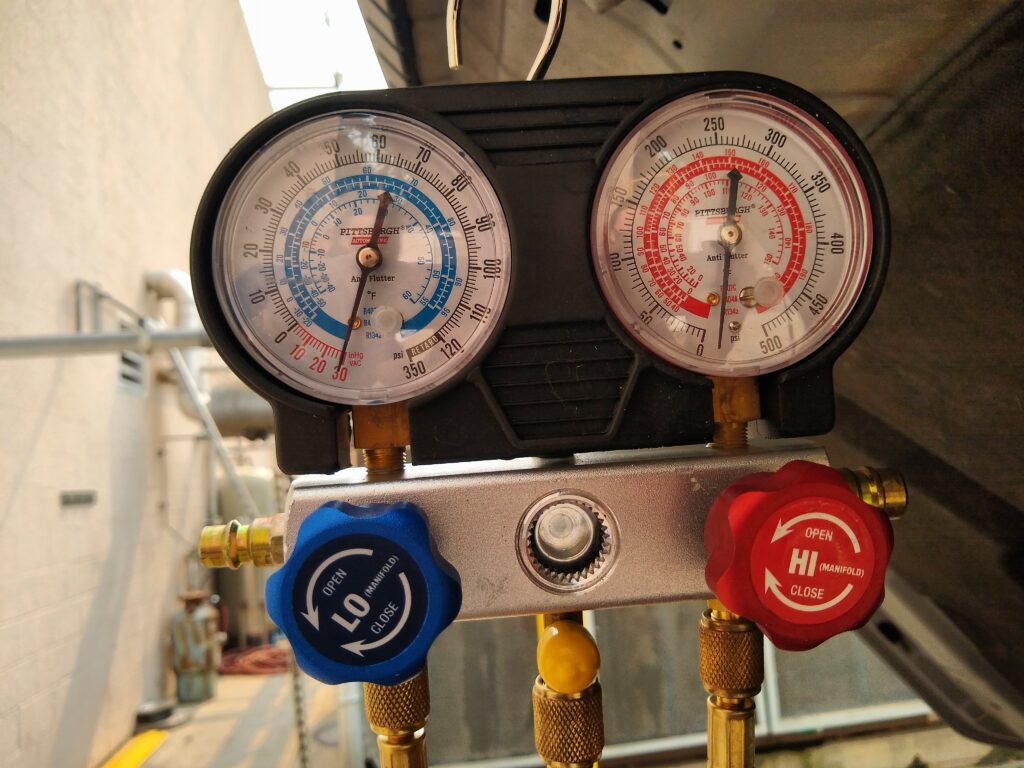 I used the big air compressor at work and the Harbor Freight venturi vacuum pump to draw the system down for recharging. It worked perfectly fine. As I had the car out back there a couple of my fellow engineers looked in amazement at where Subaru puts the oil filter (visible in the previous photos). This is a vast improvement over some of their earlier models where it was accessed from the bottom and was like a treasured egg well and securely swaddled in a nest of scorching hot exhaust manifold pipes.