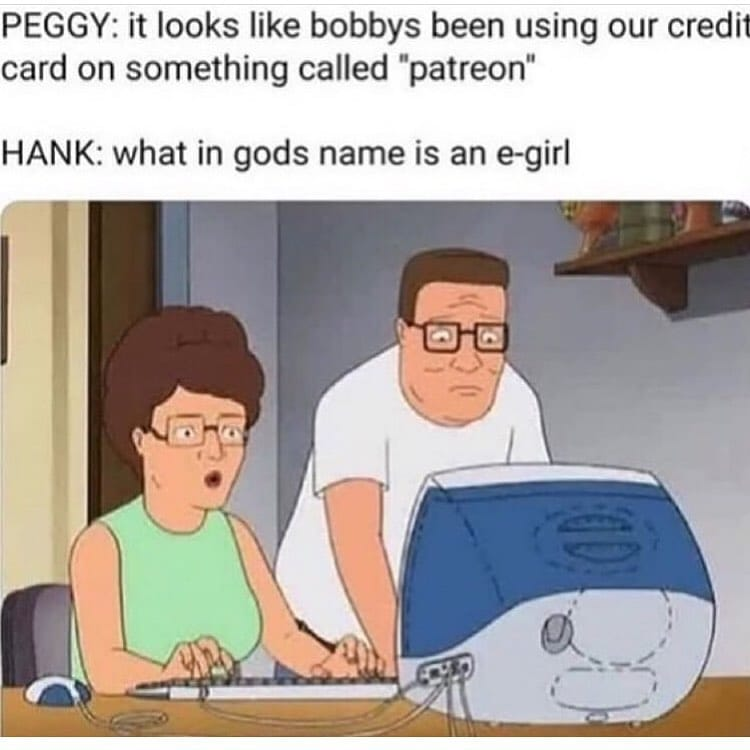 The internet is only an imaginary construct to the Hills. Please note the shadowed gray circle to the left of center on the back of the iMac G3.

That is the IEC power jack.

I cannot think of any point in the show at which a power cord was seen plugged into that jack.

In addition, when Peggy’s iMac was first seen, it was a “Bondi Blue” tray-load model. Later, as seen here, it became a slot-load model (the 400 mhz through 1.2 ghz models at the end of the iMac G3’s run used the same physical chassis). This model is one of the later “flavors”, either Blueberry or Indigo.

This suggests that the Hills were so strangely attached to this imaginary technology that they UPGRADED at some point, still without plugging power into the iMac.

In addition, well… let me point out how few games were ever released for this platform, making Hank’s playing “Pro-Pain” a very unlikely detail.

Thank you for your attention to my silliness. If you stick around, I may also go into a fun explanation of how ridiculous Channel 84’s technical operations are…

So as for Channel 84… I always laugh inappropriately at the scene where Nancy drives the news van into the active wildfire in “Gone With The Windstorm”.

This van is seen equipped with, well, the usual equipment in electronic news gathering/live broadcast vans, with an extendable mast on the truck roof that has a microwave transmitter on it to send the live video and audio back to the station.

At the time this episode was produced (May 2005) it is doubtful that any modern video over bonded cellular systems like Dejero (gah!), LiveU, or TVU (just give me back the Dejero! ARGH!) existed, so I’m going to rule out the possibility that one of those was in use.

Generally these trucks are sent out with at least two people onboard – a reporter and a trained technician/photographer who will set up the microwave link once on scene, and the reporter.

The microwave link is HIGHLY directional and only works line of sight. You have to aim it right at the receiver that leads back to the studio and this usually requires a little game of hot and cold talking to a tech back at the studio until you get the signal peaked. If you don’t have the mast raised, which takes several minutes, it’s unlikely you will get this clear LoS and be able to send back usable video. The dish is in a stowed position when you’re driving the truck around, which basically aims it at the truck roof.

The trucks also have a generator onboard to power the video processing equipment, switcher, and microwave transmitter, and if you don’t have this running, you’re not getting a shot in.

The camera that Dale puts on his shoulder is likely one with manual focus, white balance, and iris settings. At first I thought it’s unlikely that he’d be used to dialing these in to get a good picture, but I couldn’t rule out that he’s used this type of camera before to make his weird conspiracy theory videos and stuff.

That being said.. they pull up, Nancy jumps out of the truck, Dale aims the camera at her, and POP— they just appear on a monitor back at the station and are punched up live on air as Nancy’s eyebrows get torched off.

The switcher setup looks really undersized and terrible for a live news operation, but then again, it IS implied that Channel 84 is kinda rubbish, considering that they pass off an air conditioner on the roof as a Doppler weather radar.

Also, I always wonder what happened to the new weather guy. Did he just… die of laughter or something and thusly disappear as a character, never to be seen again?