Another PTek. Another questionable combiner. This one doesn’t even make any damn sense. I’m scared to open up the top of the transmitter to find out why it’s wired the way it is. The resistors are sitting on top of that hand cut piece of random PTFE and will cause a fire if they ever dissipate any significant energy. This is inside an FM2500PS transmitter.

Update: I added the horrible story below of why we have this thing.

This is a two port Wilkinson combiner that combines together the output of the left two pallets and the right two pallets. Why it’s floating on the thick PTFE slab, I cannot understand— these resistors appear to have the terminal configuration in which one lead of the resistor is the heatsinking base, and the other is the solder tab which just passes right through otherwise. WHY IS THIS BOTH INSULATED FROM AND ELECTRICALLY CONNECTED TO THE HEATSINK??!! Basically, what WILL cause this combiner to blow chunks would be any imbalance between the left and right sides of the transmitter – a single module failure will roast the entire rig. Catastrophically. See video below. 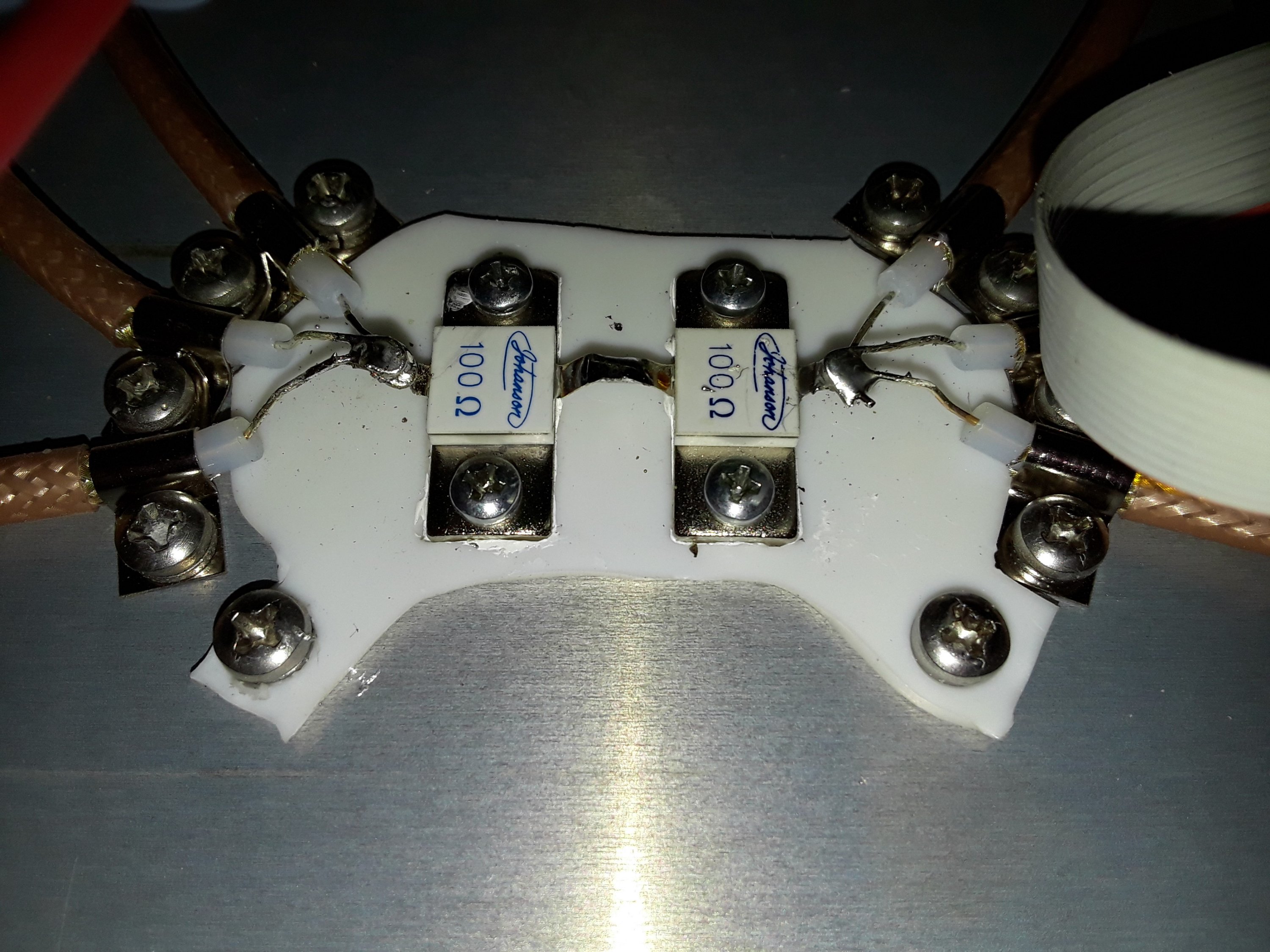 The lower line from each side goes to the start of the harmonic filter network, where they are just unceremoniously smashed together. This is… about the caliber of a badly built CB amp. 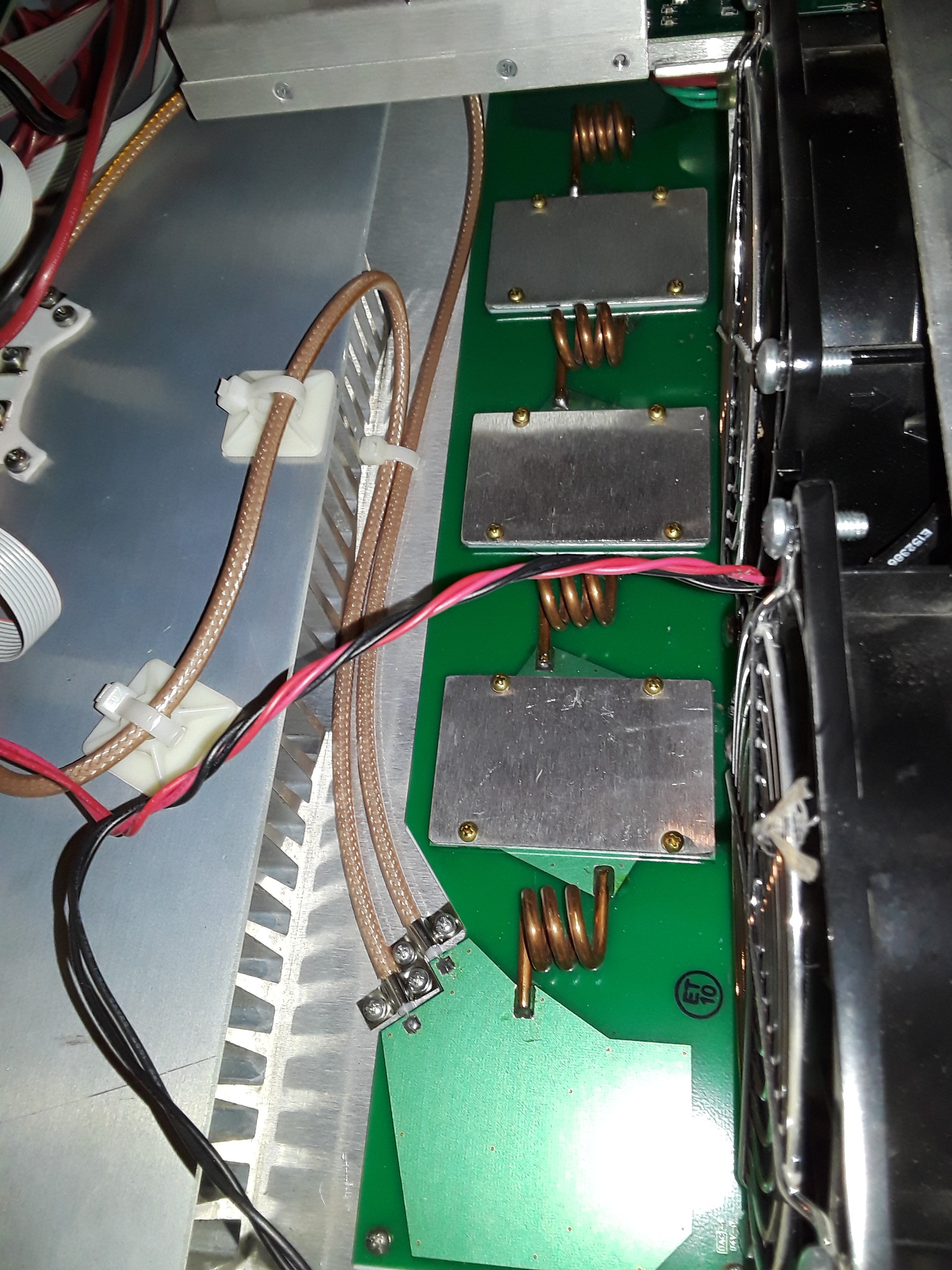 Dare I open the top and look around or have I suffered enough torture already??

Page spam cut— click to continue. If you dare. I warned you, and Alex Hartman always warns ME not to open these transmitters and look around. But I do anyway. Then my brain hurts. ARGH 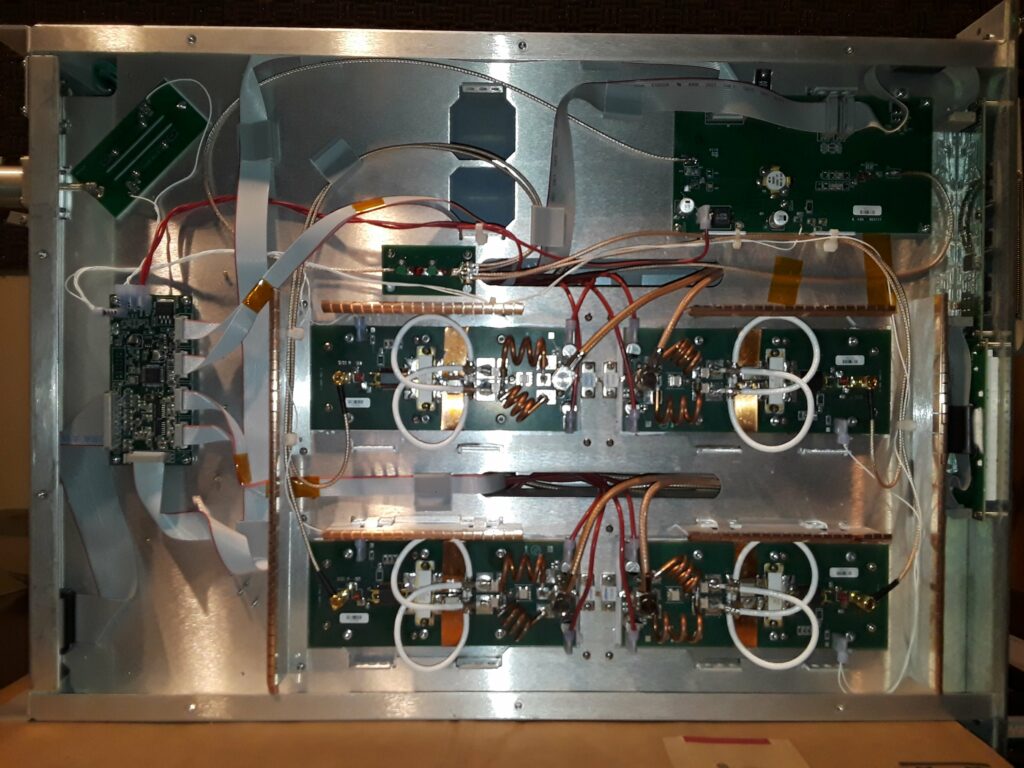 Here’s the other end of that combiner network, basically. The coaxial cables going to the TNC connectors are the quarter wave transformers of a Wilkinson combiner. The isolation resistors are found between each pallet and bolted straight to the big heatsink. For once, that kind of makes sense. So… how can this transmitter detect and protect against meltdown in the event of a module failure?

See those stringy little white wires? That’s the only connection between the CPU and the RF amplifier stages. It goes onto that PIC board at the back at a terminal labelled “AGC”.  On PTek’s older amplifiers, this board had a different function and appeared to actually control a buck converter that could set the collector voltage to the PA’s. On this one it’s just glue logic and serves as a bus expander or something. 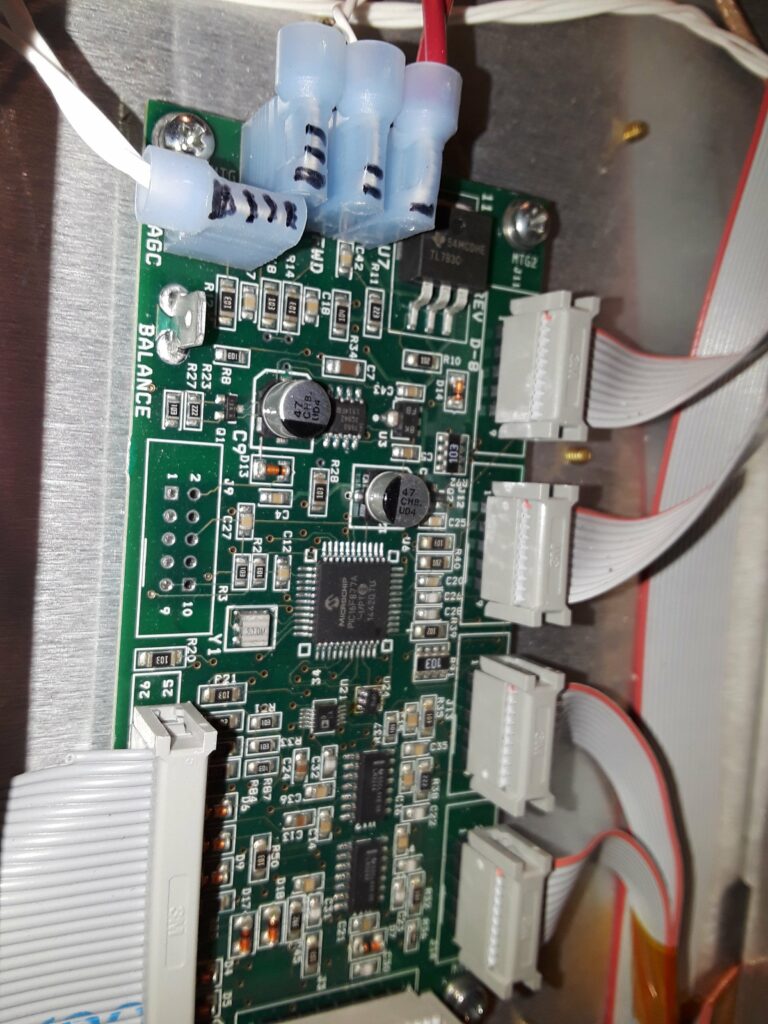 The “AGC” wire ends at the gate of each PA transistor package via this voltage clamp network (that appears to be a few common diodes in series to limit the voltage, then a 0 ohm resistor to ground) and an R/C filter. The brass tubes pass through the “binocular” core of the transformer and have DC continuity through. Most other transmitters I’ve worked on have had far far better biasing networks than this. No other transmitters I’ve worked on have been THIS SHITTY though. 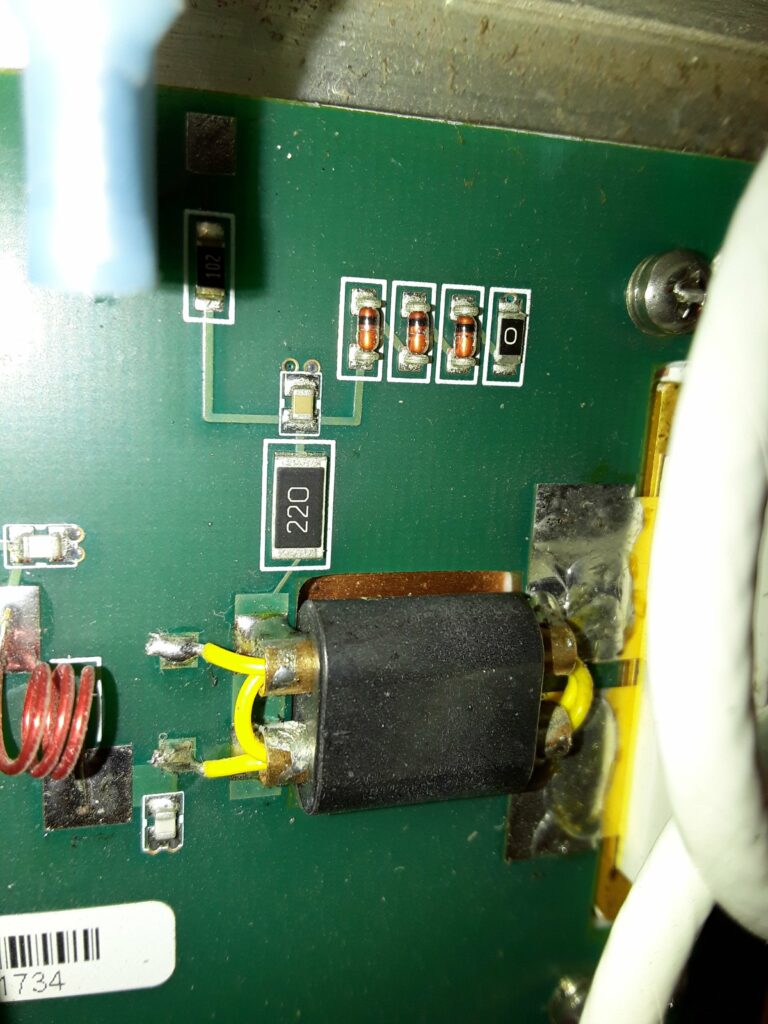 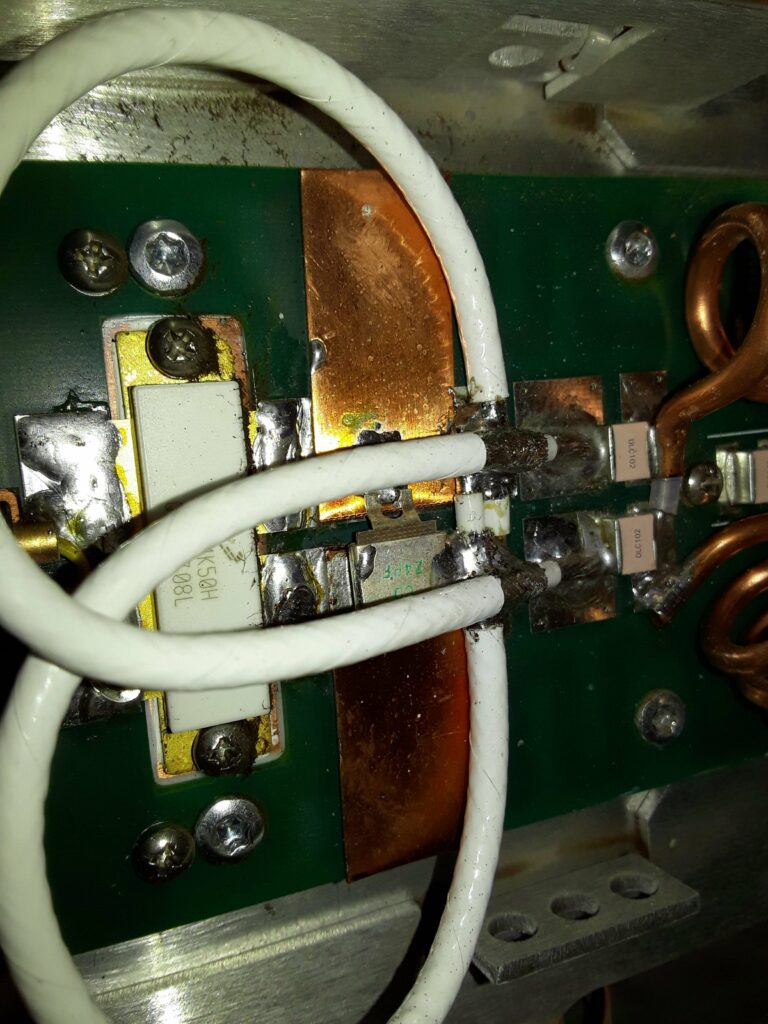 This is just a typical PTek PA module. The copper pads are.. not… they’re two wings made of cut up copper flashing material. On a similar note, the capacitors on that harmonic filter above are just metal plates clamped above pieces of PTFE above striplines on the board, but I found the screws loose so—– 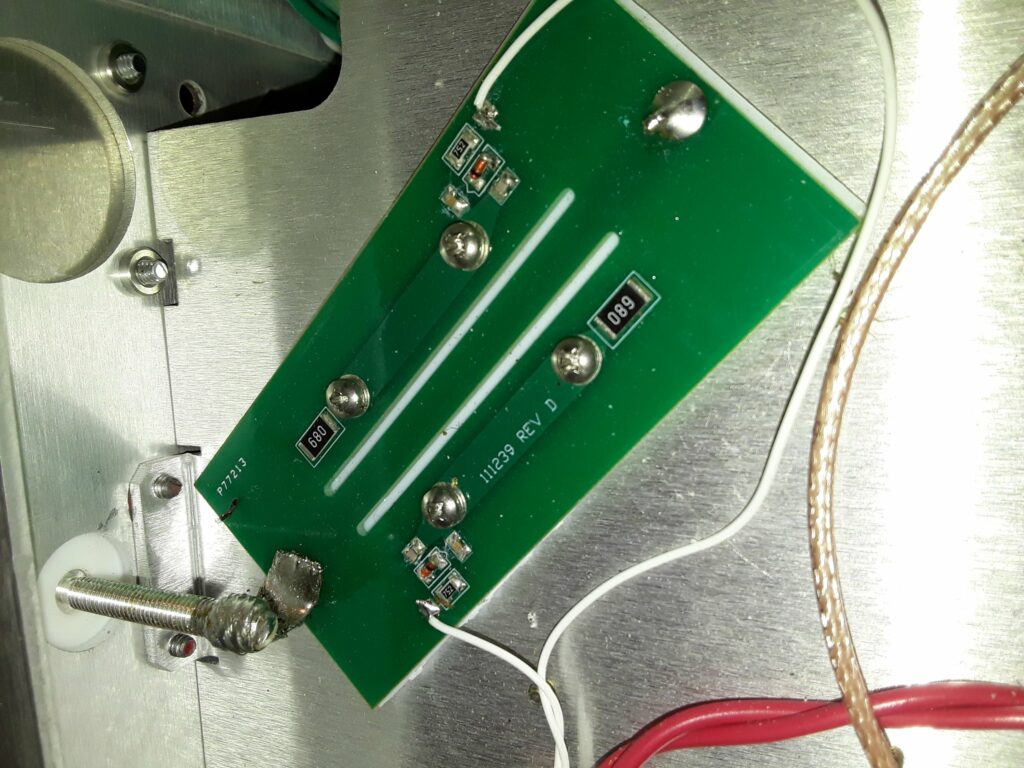 I’m not touching this shit to remove it and look at the other side but what you’re looking at is where 2500 watts of RF exits the transmitter by flowing through a 1/4″ wide trace on this board then coming out via a piece of coax braid soldered between that and the ass end of an EIA flange connector. See, you can see where those isolation slots in the metering coupler board indicate the confines of where it has to live. I’d expect to find this thing inside a 100 watt transmitter… not a 2500!!! WTF?!

You can just see some kinda thick-ish PTFE film under the board. 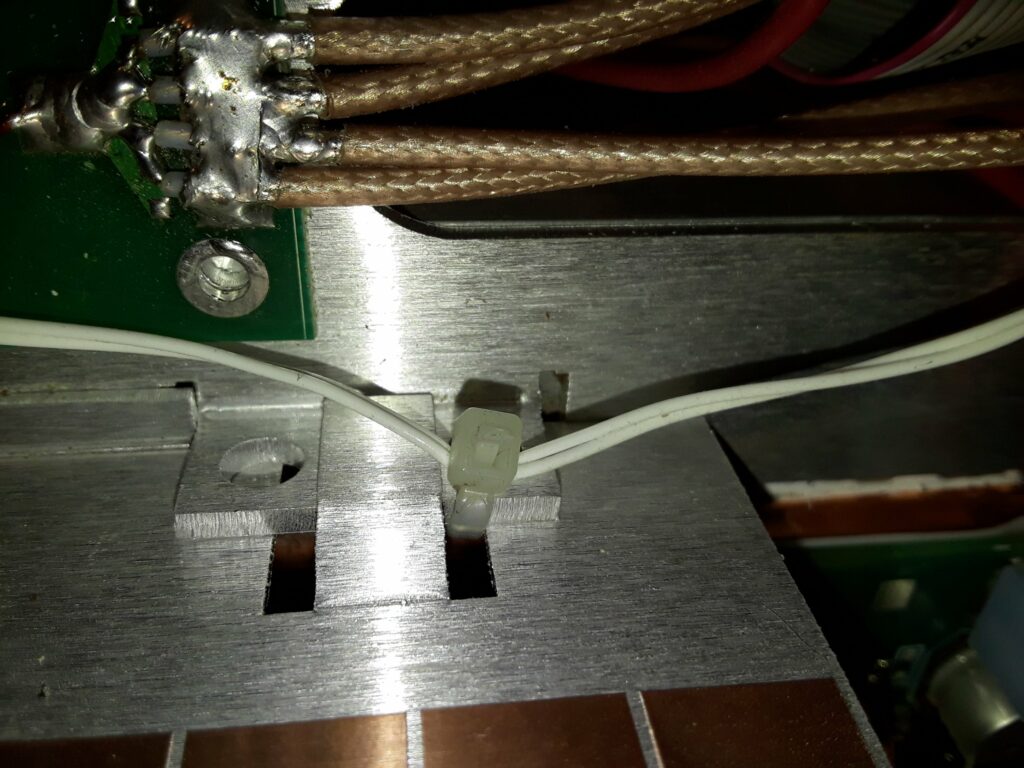 The “AGC” wire carefully dressed to sharp edges on the chassis and the, uh, godawful power divider between the PA inputs. It’s only mildly better than the one I previously had catch fire on me, and I say that only because it isn’t entirely made out of cut up copper flashing.

Here’s what happened to that other combiner, set to the wonderful music of Sisters of Mercy.

And now— the story of why we have this thing, after getting burned, literally, by the combiner  system in the video above:

ORIGINALLY, this system came from the factory with a ribbon cable buss running between all of the amplifiers, the exciter, and the combiner (all it did on the combiner was run the fan off the 48vdc supply sent down from the exciter). Supposedly there was serial communication between all the modules to ensure correct operation.

One day, a power supply shut down on one of the amplifiers and took it offline, and the imbalance popped some of the isolation resistors on that combiner. I’m not sure what happened from there, if the transmitter system went off air or remained on at reduced power.

At that point the combiner was reconfigured to turn it into a four port so the system could continue running at reduced power with four amps.

It stayed like this for a while until we boxed the whole mess up and shipped it to PTek for service. However, once they got it, they informed us that the controller boards in all the amplifiers were out of production and unavailable and they’d have to upgrade them to the new version. Uh, ok…..

We get the system back and there are notes that we can no longer use that serial buss cable, each of the amplifiers now has to have the remote control port connected and the on/off and raise/lower lines are to be connected in parallel between them all. Oh, and by the way, the new control board doesn’t provide any signals for that analog meter on the front anymore.

Gulp. Now they can all get out of sync. Just grrrrrrrrrrr-reat.

I reinstalled it all as PTek told me to, checked the metering values via the Burk remote on site (I’d wired the forward power and PA voltage lines to the remote’s analog inputs…. I don’t think ANY of the other metering lines actually worked on these new control boards as they all returned 0.0 or 5.0 volts.)

There was never any obvious protection against reflected power on any of the amplifiers, and no metering provided AFTER the combiner. I kinda always feared that its first reaction to having the antenna ice up would just be to try to dump lots of power in the combiner and blow it up— or the voltage / current on the tiny noodly coax transformer sections inside would blow them to smithereens.

It was a nice fairly warm day, no ice, no rain.

I left the site and it was still on at full power.

My phone rang at 5 AM. “Hey, Shit On A Shingle* is going on and off the air”. I tuned it in and what I was treated to was amazing, it was like the sound of CBS Sports Radio being fed through a garbage disposal. I took off for the site shortly afterwards and found it still intermittently pulsing on and off air. When I opened the door to that little shack, my eyes burned like someone threw salt in them and I started coughing. I smacked the breaker on the wall and retreated, leaving the door open to air the place out.

Later I read up on it and found out what I’d probably experienced was a nice cloud of hydrofluoric acid mixed with phosgene gas from the burning PTFE insulated cables in the combiner.

About half an hour later I went back, removed the entire stack from service, hooked the exciter up to the transmission line, switched it back on, and began removing the melty mess. The amplifiers, amazingly, all seem to have survived the ordeal, but the combiner was toast!

You can see pictures of the combiner just before the meltdown here. https://www.kg4cyx.net/ptek-combiner-shibe-version/

Supposedly, the story behind that bizarro coax was that they got a really hot deal on a LOT of it from an industrial surplus deal after a project for Uncle Sam got liquidated, and had shoehorned it into everything they’d built since.

PTek’s apology for this was to give us a discount on a new 2500 watt rig for that site. My response to this was a lot of displeased angry noises and NOPES, but sadly…. the business office thought their offer was too good to refuse and bought the unit. The shitbox is running ok, only on its second exciter card after the first one developed a modulation level control problem… and amazingly I did not simply heave it into the sharp rocks down the hill in anger after a piece of copper fingerstock on the lid popped up in handling and sliced my hand open.

The marketing on it says that its fans are temperature controlled, but they are not – they’re just wired straight across the 48vdc rail. It has 180 watts of muffin fans — SCREAMING loud Delta 140mm(?) things that take 2 amps and have stator vanes. I’ve seen 3000 horsepower turbo-diesel freight locomotives that don’t make that much noise when notched up to Run 8.

* I call the site Shit on a Shingle after a combination of part of the name of the city it’s near and the fact that it houses a PTek and other questionable nonsense.