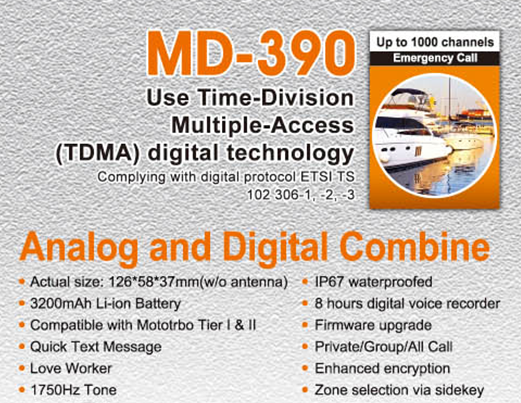 I wonder if the Tytera MD-390 will have fixed some of the oddball bugs from the MD-380? One notorious one that’s come to light recently is that if you un-key then key up again shortly afterwards, the radio’s transmitter timing slips and it’ll scribble over the opposite timeslot. Sounds like a show stopping bug and I’ve seen it blamed on a bug in the Texas Instruments DSP chip at the heart of the radio, which… I’m not inclined to believe.

Either way, even if it was, it’s not like there haven’t been software workarounds to hardware bugs that work successfully before. Just look at the Linux kernel – it’s got a LOT of fixes for CPU/chipset issues which would otherwise be show stoppers.