So I’ve known about the HP Instant Ink program for a while and I always hated it. Basically it gives you DRM encumbered ink cartridges as a service, which HP can disable at any time… Yeah uh… No thanks

This requires the printer and/or drivers to phone home to hp all the time, I never really thought of the mechanics of this until I saw someone post this response from Fiorina-Shenzhen, I mean, “hp” support ….

I don’t even have words to describe how terrible an idea this is and how terrible their product design is if it requires this. And yes… I’m sure that firmware can be exploited rotten for entry and lateral movement upon your network once you fucking DMZ your goddamn inkstortion device. Have I said fuck enough times? No. Fuck this actual shit!!!

It’s long been my opinion that Sprint’s network is basically a stack of weird LTE extender technologies stacked in a trenchcoat pretending to be a network.

They started out with some very curious CDMA sites, then upgraded to LTE, working alongside Ericsson.

Alongside their EvDO “3G” network, they offered the Airave device, which was a home bridge device that offered a femtocell connected to your existing home internet to improve service in areas where it’d otherwise be weak.

The latest take on this is the “Magic Box” which is a small LTE repeater/extender.

I found one in a junk shop and pulled the covers to reveal the “magic”. 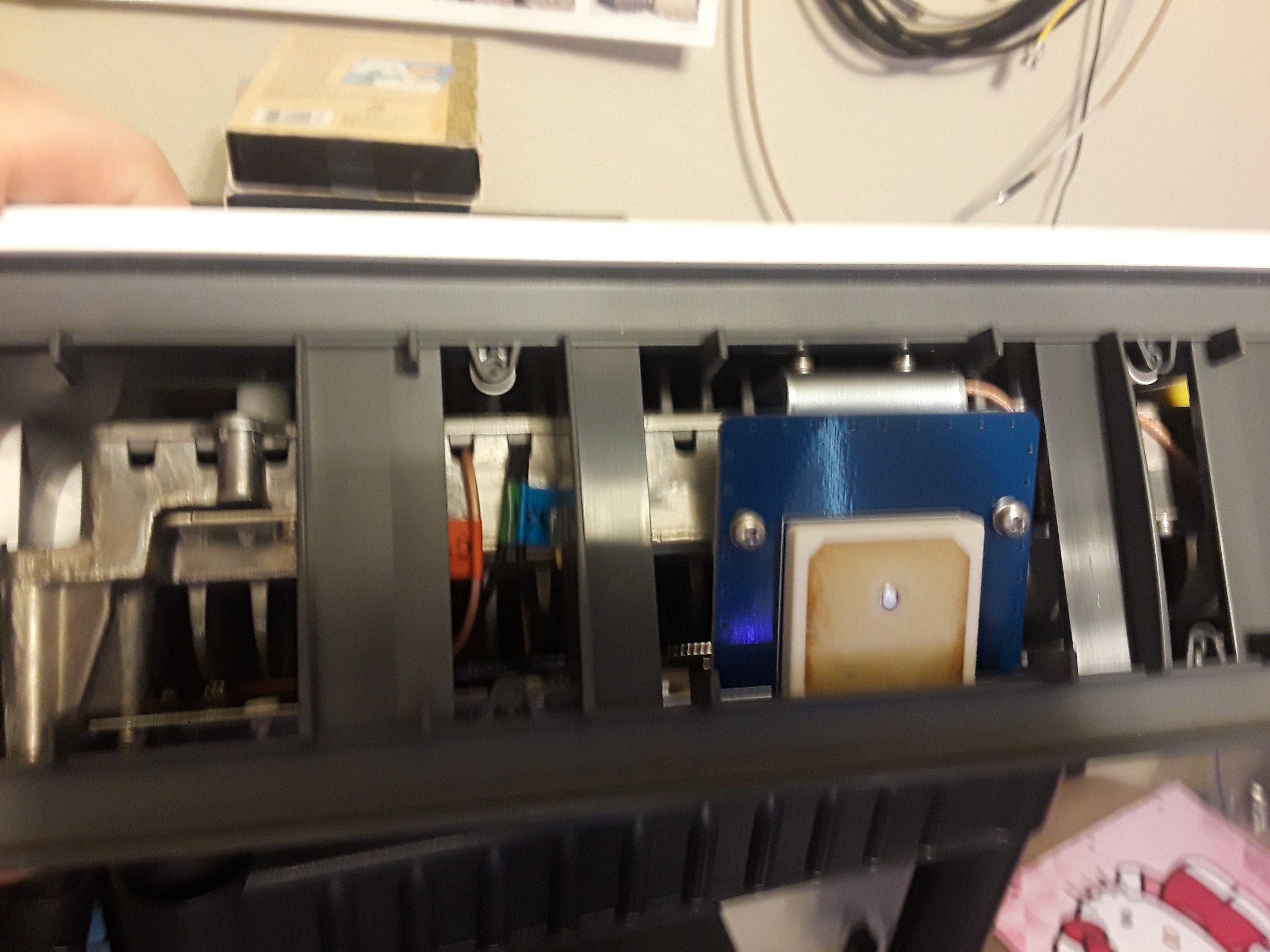 Top of the unit showing the GPS antenna. The device is intended to stand in a window with this up and facing the glass. It’s really meant to sit in a window, as the donor antennas to connect to the existing LTE network are all on the back side… 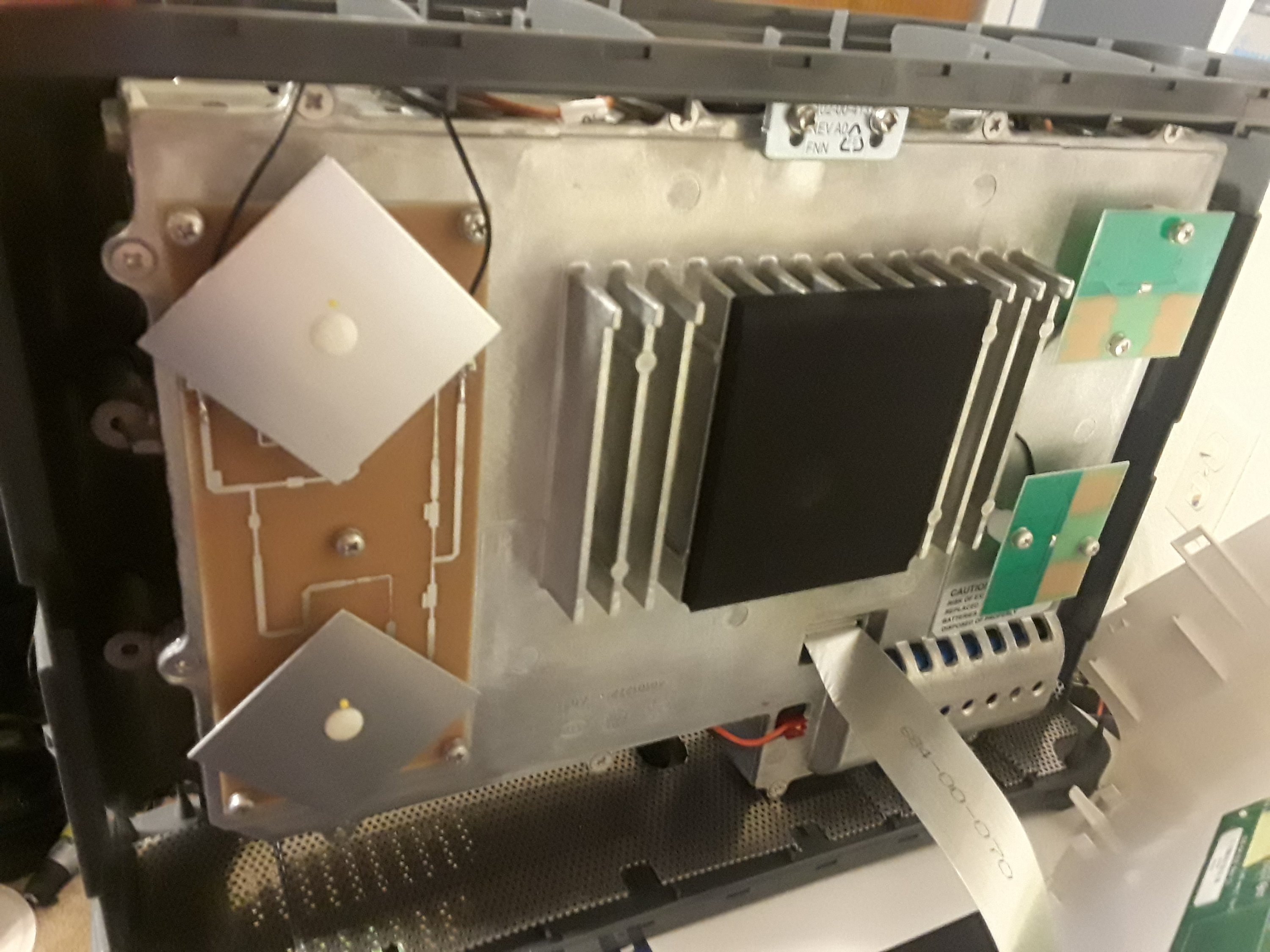 On the side that faces the user, there’s a smaller 2.5 GHz panel, and a set of WiFi antennas. The black pad is just foam to support the cool e-paper display… 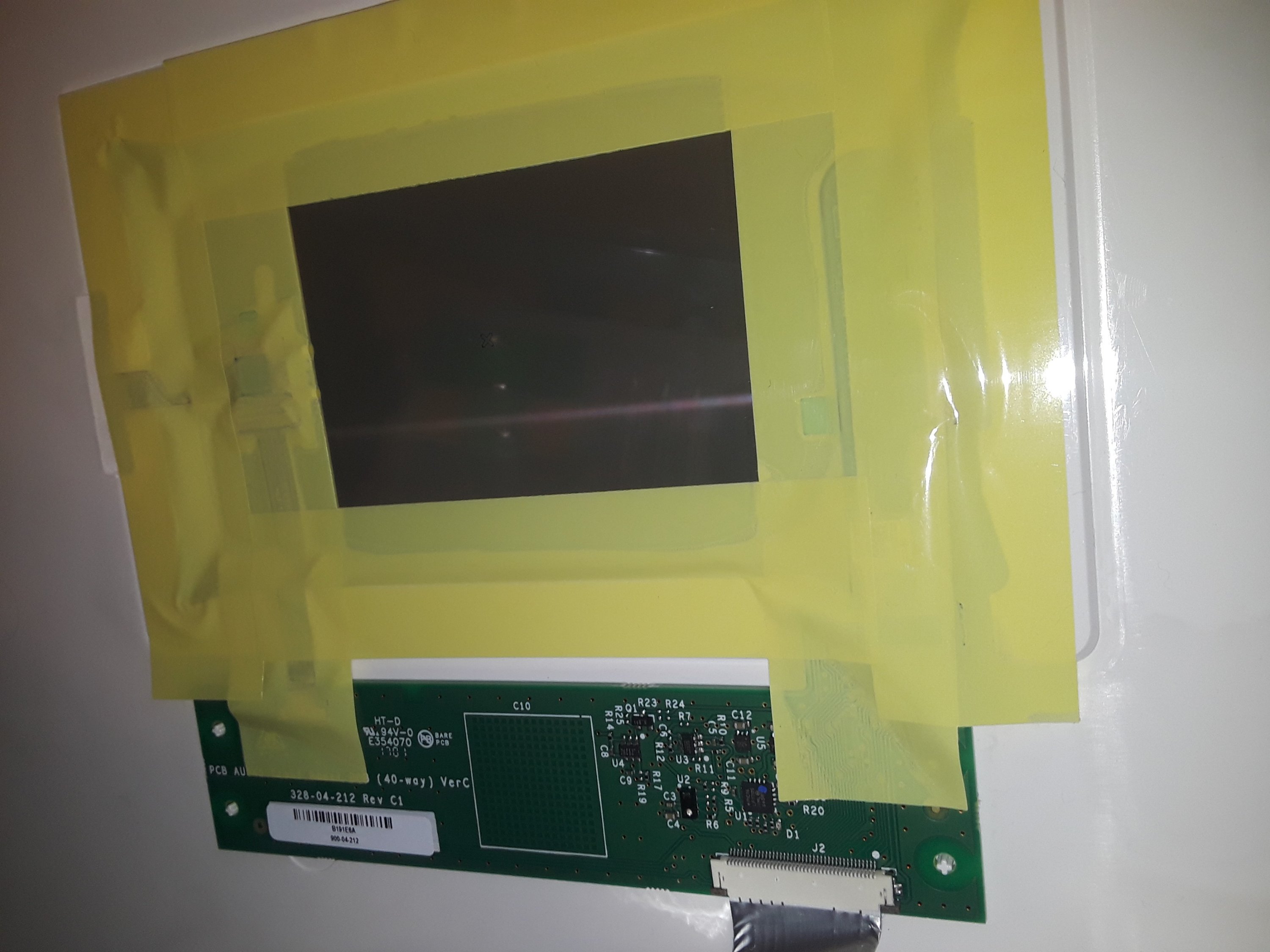 The big capacitive sensor on the bottom front is the wake-up button you use to start the unit. 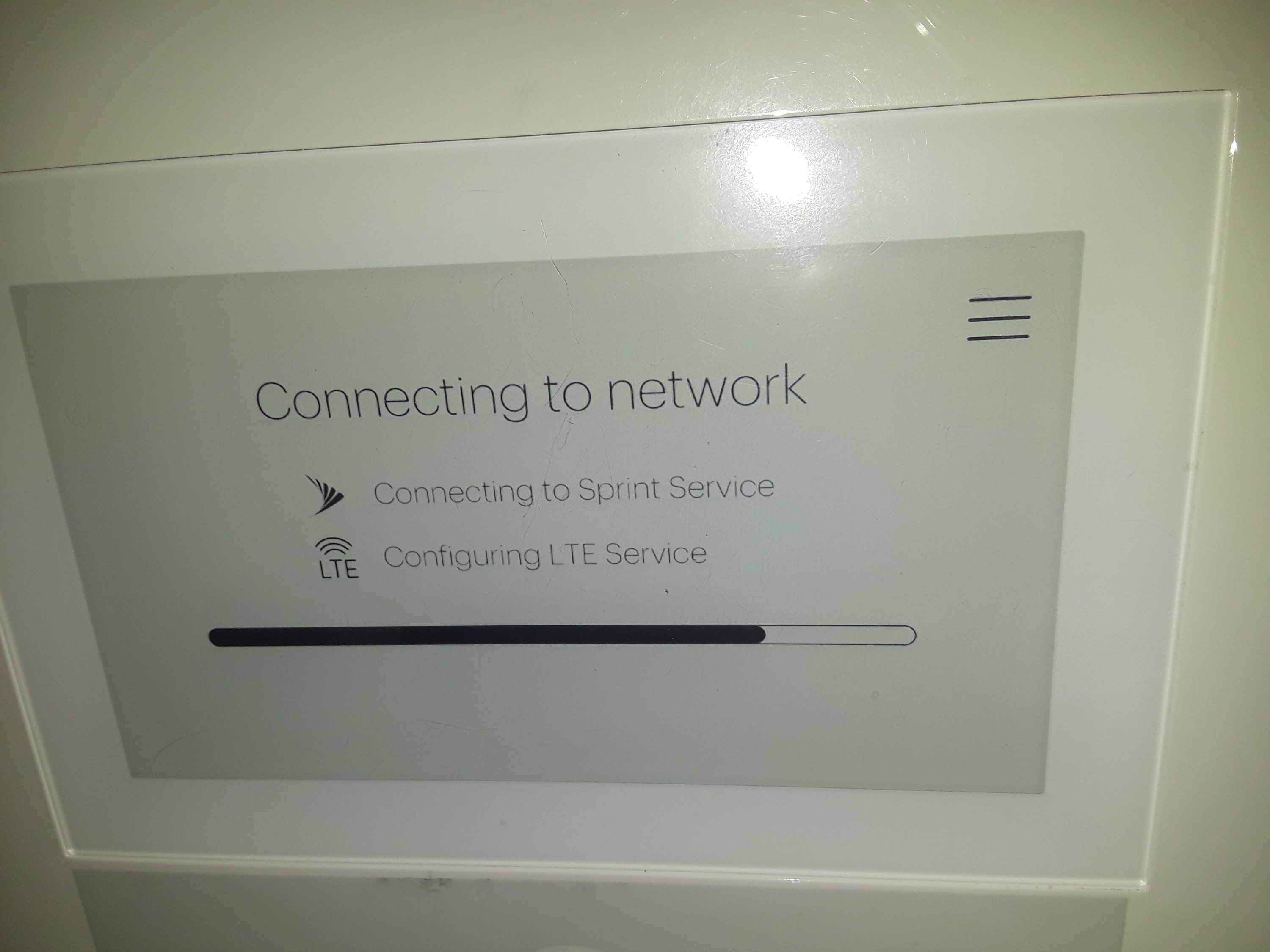 Unfortunately that’s as far as it’ll get, as Sprint has allowed their service to degrade to non-existent in my city. 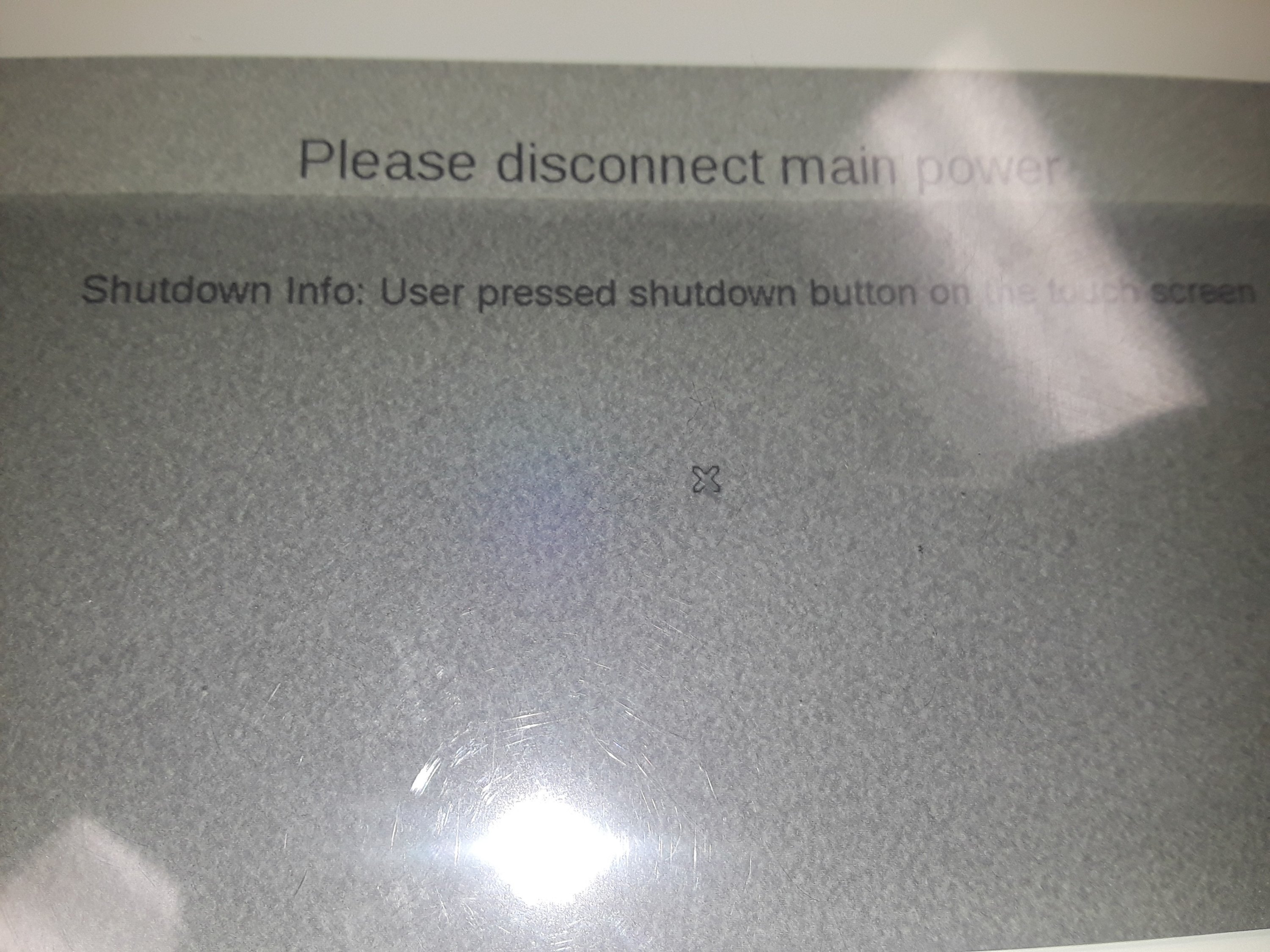 You can often get the display to do stupid things showing some basic X.org widgets as it glitches out.

There is no Ethernet jack on this unit. Some hackers have reported the presence of a 3 pin serial header to get in to the bootloader, but I’m not sure where this lives – further disassembly may be needed.

It’s also documented that there’s a tamper detection system built in to prevent the device for being modified to do Evil Things to the network and/or users’ data.

It’s an interesting device, and I find myself wondering what the performance of those antennas is. They’re pretty impressive and would certainly net you more signal than the tiny stripline antennas inside your handheld device!

How to forward ports on a SonicWall:

Okay, it’s easy, just start steeping some hemlock into the blood of a virgin in a quartz flask upon an altar of old single sided floppies and get to work—- 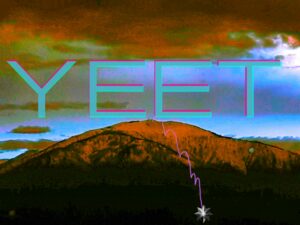 you will not know this horror unless you experience it for yourself and i recommend you not.

sonicwall was clearly developed by someone who had a raging databases-where-databases-are-not-due fetish.

Then you define NAT rules.

HOWEVER…. if you manually enter or edit anything about a NAT rule, for arcane and horrible reasons that have apparently never been addressed in over a decade worth of firmware versions, they break. The only reliable way to create these rules is to go into Quick Configuration and use the Public Server Wizard. There, you can create your objects (or select them if they’re existing already) and bake them into a NAT rule.

Then maybe 40% of the time it works and the rest of the time you’re frantically SSH’ing into a remote shell somewhere else and crying into your coffee over the output of nmap.

This is the map of wireless APs I was first to discover in the wigle.net database. Note that this is not necessarily areas I have travelled in — rather, it represents intersections between where possibly mobile (as in, cell phone or vehicle integrated hotspots) APs and my travels have intersected. As other wigle users log later locations of these APs, the database will update to reflect where they’re actually from.. or where they’re traveling. That’s why I show up as missing the rains down in Africa, for instance. 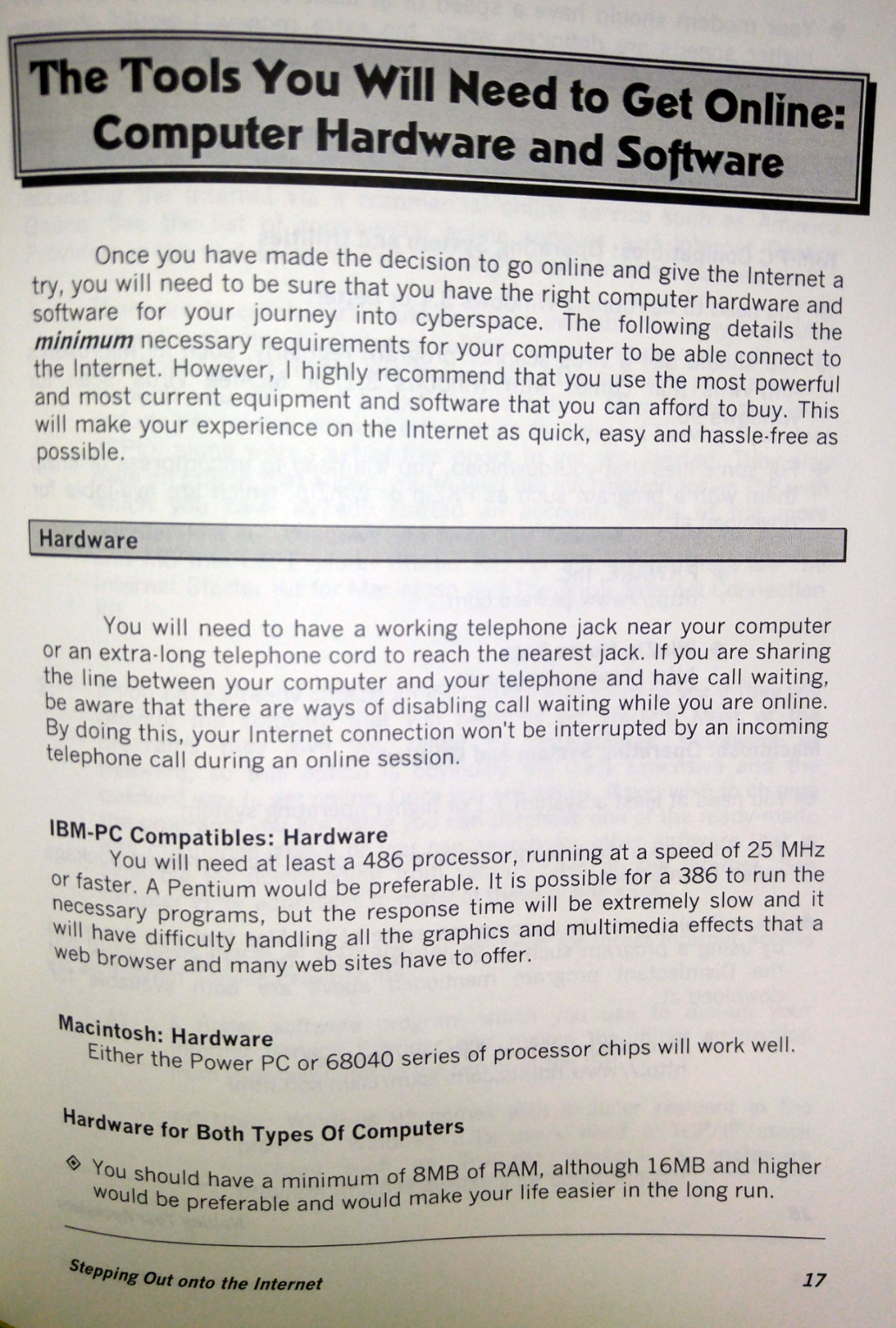 It’s not uncommon to find where old Bell System techs have left their mark next to the equipment.

There’s something oddly fascinating seeing it like an old dusty history book. Where are they all now? 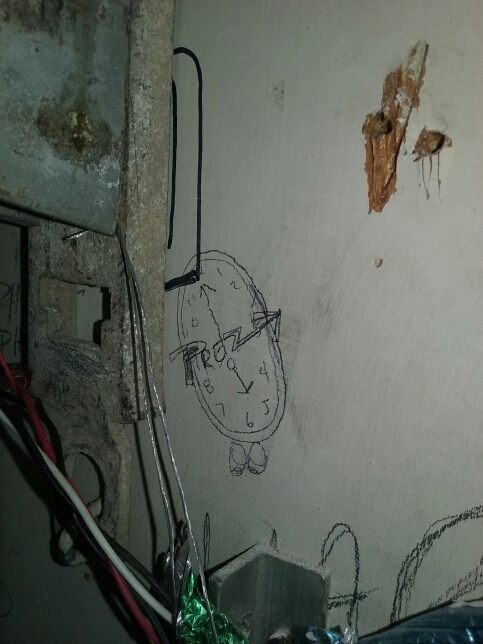 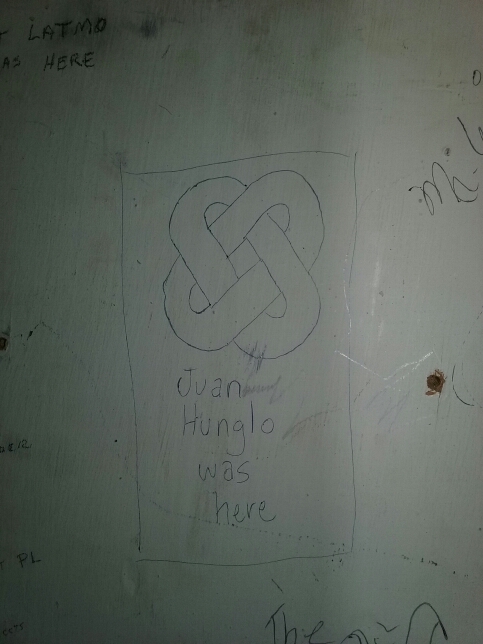 See, these guys were classy, and cared about their work, unlike the douchecasserole who did this: 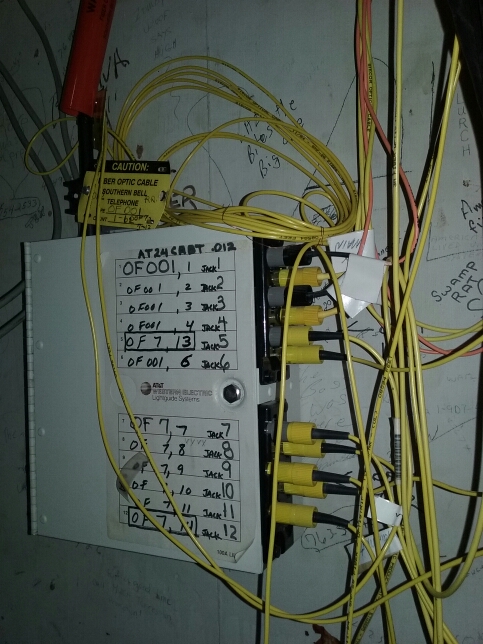 Voila— you have your very own 21st century Graph Channel.

There’s a RF spectrum analyzer in there. Now, it’s not a GREAT one, the minimum frequency resolution is a big wide 6 megacycle wide sweep…. but it’s there. 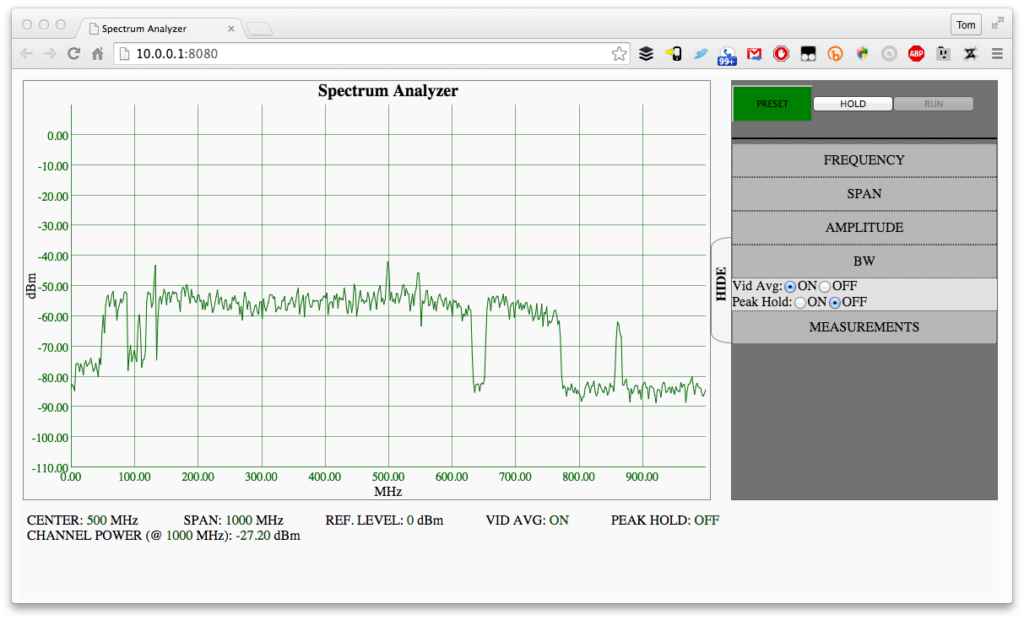 Overall view, you can see the bands used for upstream and downstream, divided by a blank band around 100.

That band has some spiky bits in it. What are they? Well… I live within walking distance for the transmitters for a couple of 100KW ERP FM’s…

ENHANCE! There’s 93.5 “The Bull” W228BV-FX; 106.7 WDXJ-FM + HD, 105.9 WBGG-FM, and a few others, all leaking into the cable system at fairly harmless looking levels. I suspect Comcast simply leaves this band of spectrum empty on their cable system to make life easier in the face of RF leakage. (??) 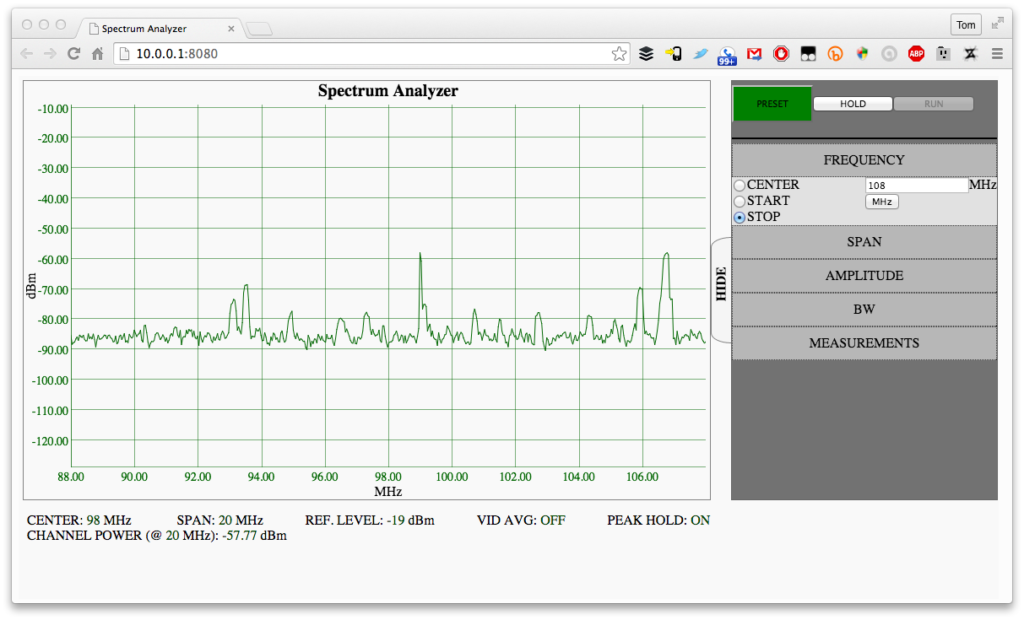 I’ll code a GUI interface in Visual Basic…
The view goes in just enough to make the analog carrier and HD sidebands of WXDJ-FM visible and distinct. It looks like the lower one MIGHT be suppressed a bit – this is an interference mitigation feature present in modern HD exciter firmware from Harris/GatesAir, Broadcast Electronics, and Nautel. You can back it down a bit to be all cool and avoid adjacent channel interference. 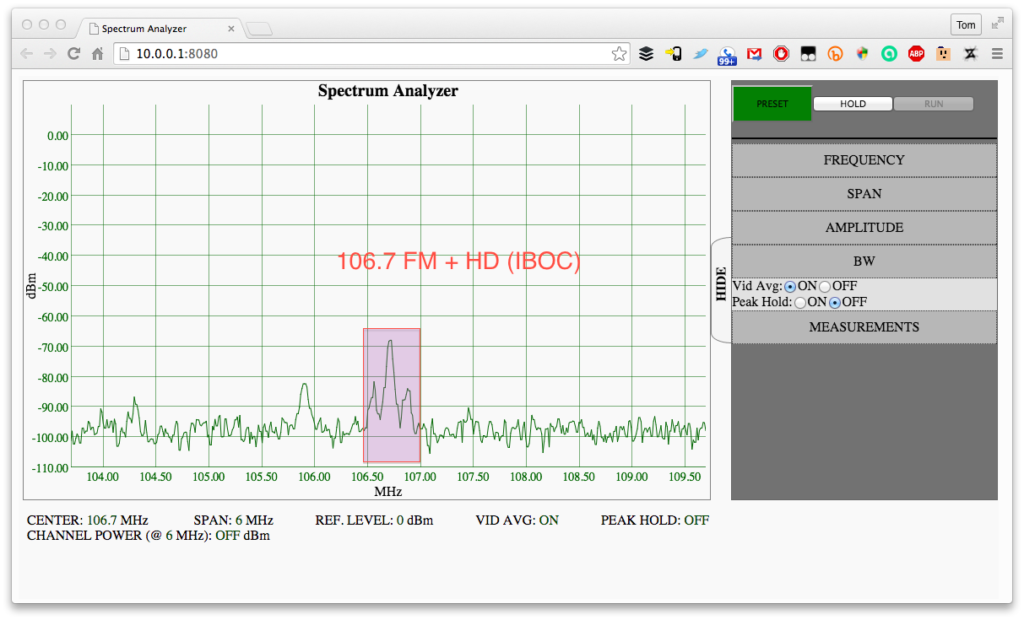 I dunno — you can’t expect a spectrum analyzer built into cost engineered nasty home internet CPE to be the best thing ever, but it’s still fun to play with.

Adding another one to the ether of the Internet.

I’m paying over $80 a month for supposedly 25 megabits from Comcast via cable. Price keeps going up, speeds keep going down, as does the connection itself.

The fault appears to NOT be with the last mile – the modem’s SNR and signal levels look quite acceptable. I’m gonna call 36.8dB SNR and -1.9dBmV “Lucky Duck!” levels for QAM256 demodulation… aka “you’re in luck, your DSP can accurately decode this in its sleep”.

Over the past couple of weeks, this is about average: Calling Comcast support yields ONLY a “support” script telling me to scan my computers for viruses with their free version of Norton Antivirus. No thanks.

Sadly I live in an area where Comcast has an ABSOLUTE monopoly when it comes to home Internet.

Anyone know of a way to get a real tech on the line at Comcast who is CLUE equipped? 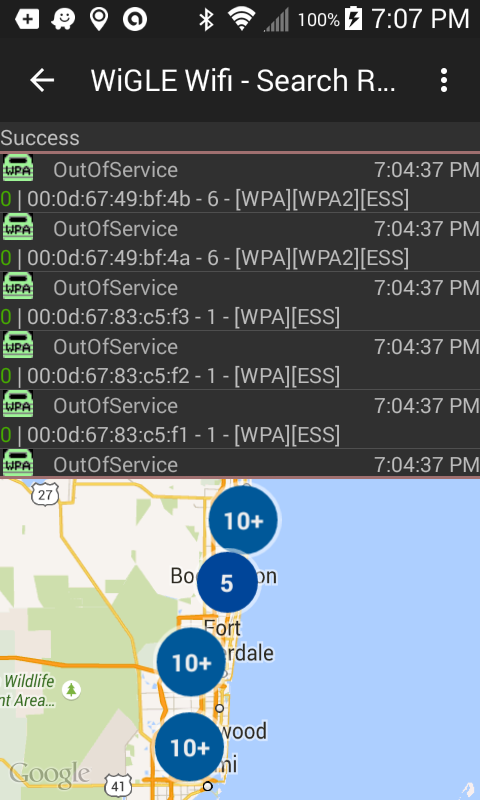 One of these days I shall have to post my observations on retail store Wi-Fi customer tracking systems… For now though, here is what you can do about them if you have a rooted Android device.

Pry-Fi is a fun little toy for this purpose. It does a couple of things; one, it can turn background scanning on and off.

Your device always scans for networks when Wi-Fi is on but not connected by dropping a Wi-Fi probe request on each channel. This probe request contains your device’s unique hardware MAC address. This MAC address is what the tracking systems use to identify you – their business end is a number of wireless access points that allow monitoring and relay the probe requests on to a mystery server. Here’s what they look like in the wigle.net wardriving app: 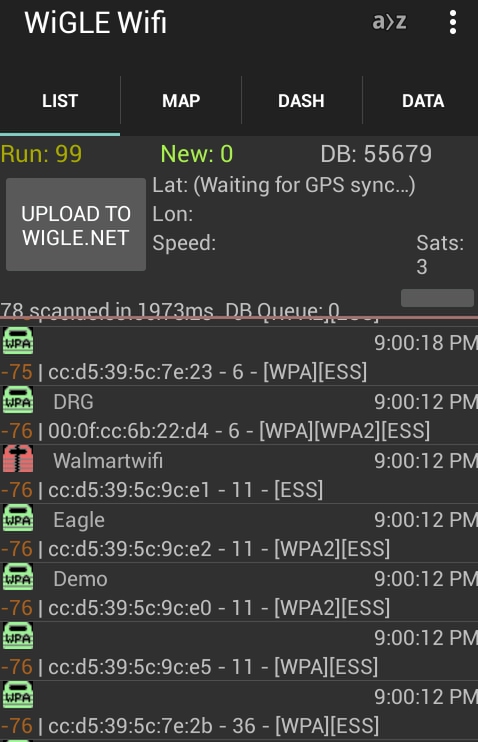 Note that 78 of them replied to my probe requests!!

Pry-Fi can usually (hardware dependent) change the MAC address to fool these things into thinking they’ve never seen you before.

Best yet, it has a war mode, so when you know you’d otherwise be tracked, it can flood them with randomized probes! 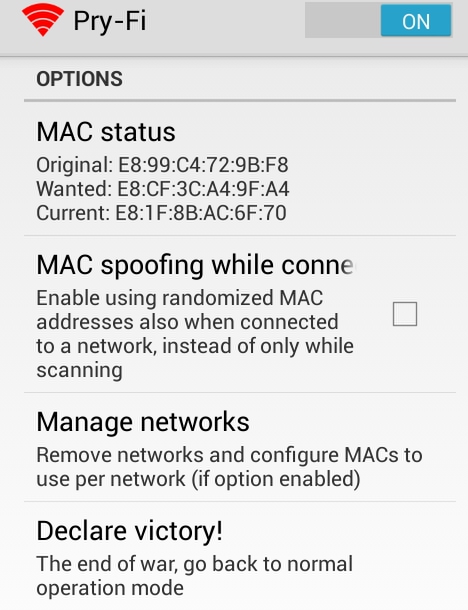 It’s just kind of awesome. It won’t be able to do anything on a device without root, of course, but if it has access and the WiFi driver lets it change MAC, it can work its magic.