Skip to content
ATSC 1.0 has at least two very dumb things about it. #1: The 8VSB modulation. 8VSB is basically amplitude modulation with, spectrally, everything below the carrier attenuated off. In theory, that sounds ok, except that it’s extremely vulnerable to multipath. GUESS WHAT HAPPENS ON EVERY TV SIGNAL IN AN URBAN AREA. The margin’s not that big for multipath, and once you hit it, the whole signal’s useless, leaving your viewers to dance around with the antenna and wonder why they just can’t get picture….
8VSB was only, from documentation I’ve found on it, lab tested for performance in terms of signal to noise ratio in a proof for the FCC… no attempt was made to simulate or measure receiver performance in the face of multipath. I’m not sure if this was because nobody ever had the “aha!” moment and realized it’d be a problem or if some vendor already heavily invested in it swept it under the rug. Just about every other country used DVB-T which allows for more spectrally efficient and robust modulation standards including QPSK (very robust but not as efficient as QAM), 16QAM, and 64QAM.
This raises another issue that was dumber on the broadcaster’s side: 8VSB was in part chosen because it would, in theory, work through existing analog transmitters, requiring only slight modifications to things like the combiners and an exciter swap. In practice, no transmitter manufacturers really opened this up as an option, and everyone had to buy all new shit. In fact… the klystron based UHF television transmitters proved not to have the linearity (or SOMETHING) to deal with 8VSB and the Inductive Output Tube had to be brought out of mothballs to deal with it. The IOT has great linearity but no damn efficiency – it was originally used by General Electric for an early World’s Fair demo of UHF television broadcasting, but commercially never took off… anyway, later on, EEV’s esciot series tubes improved on that somewhat… but… they’re still a pain in the arse
Stupid Thing #2 (or is it about #8 by now?): MPEG2. Do I look like I know what an mpeg is?*
So here not only do we have this shitty 8VSB modulation sapping the available amount of information that can be broadcast in a certain width of channel but then…. MPEG2 video coding was specified. I suspect that’s evidence of the standard’s development either being dragged out forever OR someone just wanted to be able to use up a bunch of DVD player decoder ASICs they had sitting in a Chinese warehouse. As a result of the MPEG2 encoding being used, the picture looks like DOUBLE BUTT when there’s a lot of motion, especially when you’re running a lot of subchannels squeezed into that 18.3 megabits/sec…
And then you have the whole godawful thing where the CECB program led to the cost of converter boxes which probably actually cost about $25 including hardware, manufacturing, and patent licensing royalties being fixed right up to $40…. but that’s a far dumber story
* https://www.youtube.com/watch?v=j5nZhf8SjXw

(this is beginning to make the WordPress editor cough up hairballs) 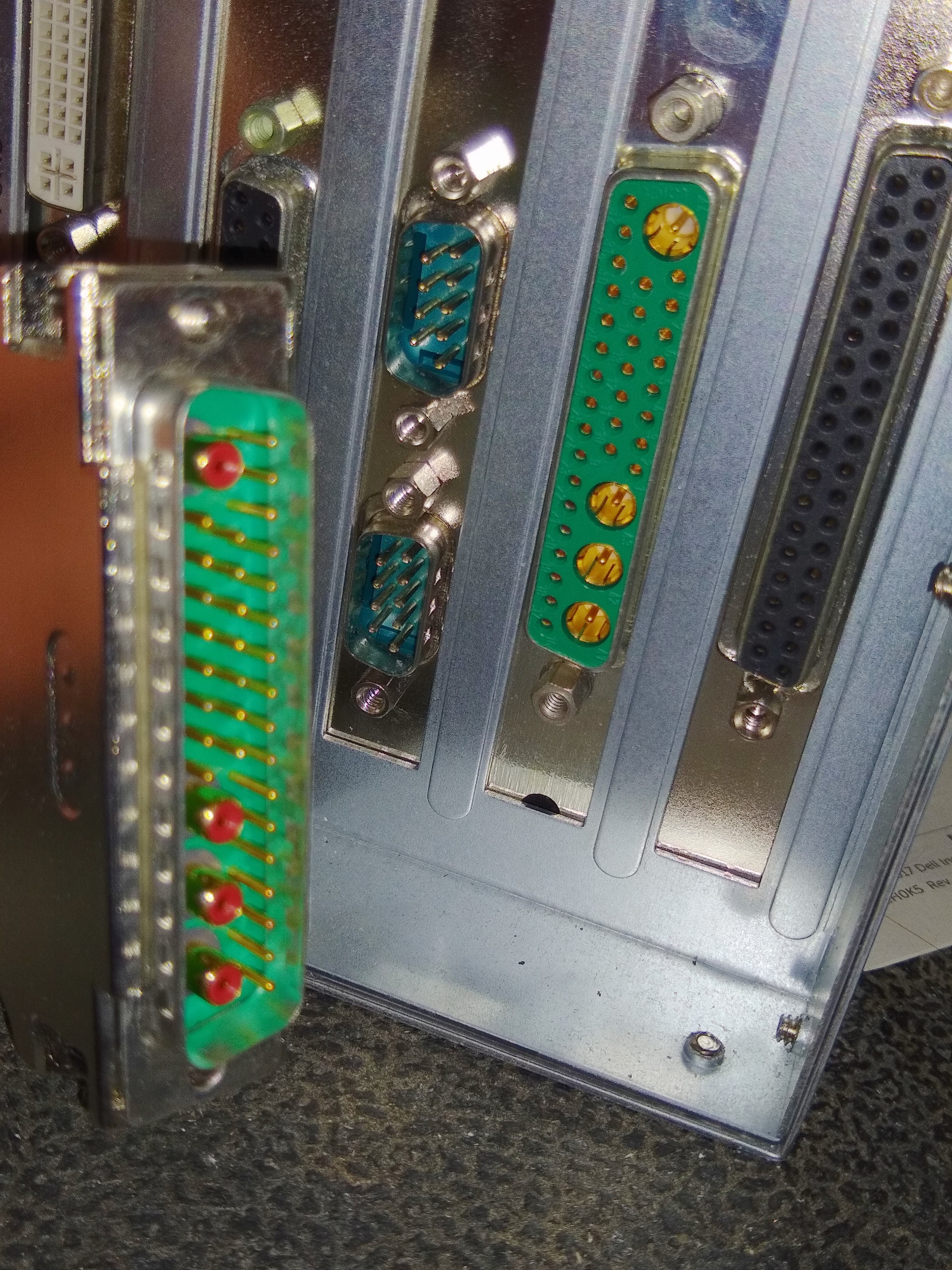 This sure is, uh, a thing Matrox did once. This is on the back of a ChyronHego graphics box. The small coax connectors are 75 ohm, used for HD-SDI video. 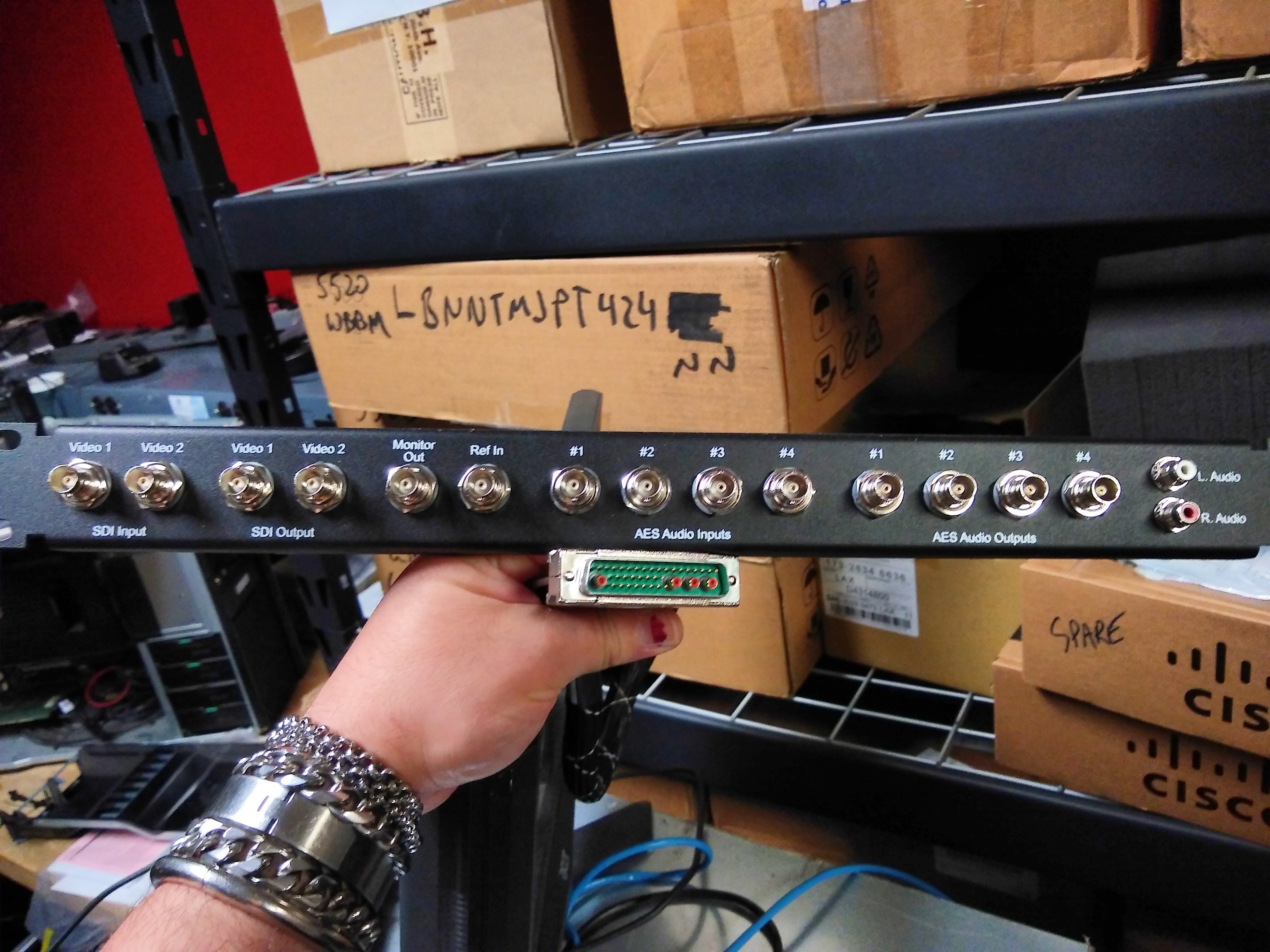 END_OF_DOCUMENT_TOKEN_TO_BE_REPLACED

Saw this picture on Twitter and well, it’s distinctly output being generated by a Digital Alert Systems / Monroe DASHECK.. I mean.. DASDEC… 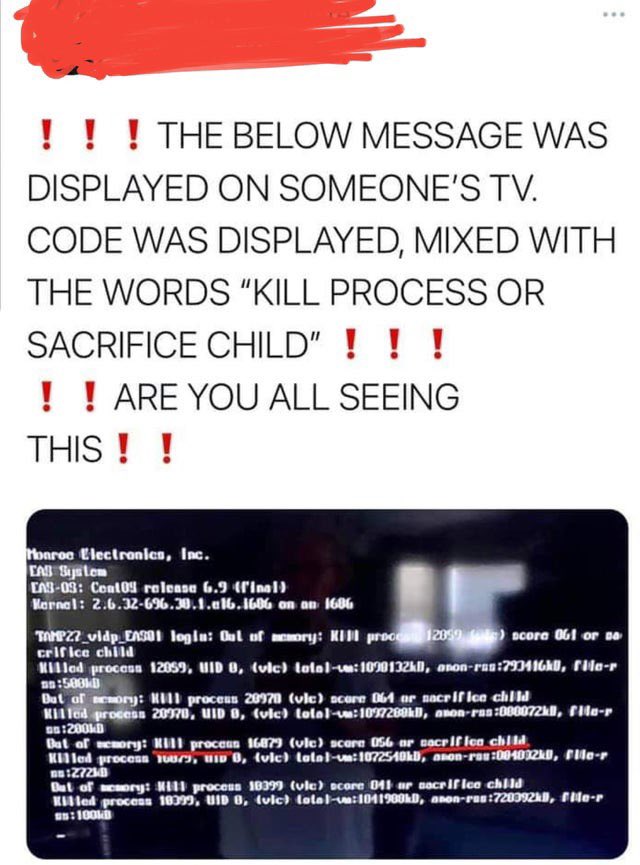 Nah, there’s nothing evil about these things though, they don’t sacrifice children and they certainly aren’t in any way possessed….

Really though, this makes me wonder, I’ve known for quite a while that these things are basically just a Linux box. They have a fair amount of obfuscation because the they sell a bunch of extra options and are making at least a token effort to keep the IPAWS server keys hidden…. however it appears that they use VLC for some reason? Funky.

I’ve always wondered what the AM and FM radio cards in these things are. A nice feature they offer is the ability to go back in there and get a recording of the AM / FM monitor sources as an incoming alert was picked off them. That’s also present in the current versions of the Sage Digital Endec but the Monroe will give you one for each source, while the Sage actually only monitors one audio source at a time (the first to go active steals it and the rest are not monitored).

I dunno, EAS is just horribly cursed, and my idea of Heaven is a solid white nightclub with me as a headliner for all eternity, and they *love* me.

Circa 1960s. We don’t know why one of the breakers is labeled Dumont as this site was built out after the Dumont TV network ceased to exist.

END_OF_DOCUMENT_TOKEN_TO_BE_REPLACED

… hammering dents out of some Aero.100 audio processors the network handed down to us without proper packing for shipment

It’s a cute little box and works damn well when you don’t smash it to death!!

That Sony disk recorder will be the subject of a strange post because it’s very strange.

So I was looking for a picture I took a while back of an audio mixer and searched Google Photos for “mixer”. First result?

So I figured it was a good time to reboot the ELC automation server for Good Day Sacramento and one of my coworkers has wanted to braid my hair ever since I dyed it all rainbow. Her daughters aged out of letting her braid their hair and she missed doing it… so she braided my mane while ELC juddered back to life. The result is amazing.

The shirt I’m wearing is one I drew on with glow in the dark fabric paint. I wasn’t sure at first if I liked how it came out until I saw how it looks actually worn. It just didn’t look as nice lying flat. I’m gonna have to put a blacklight up at the station somewhere for…. reasons.

Ever seen a TV live truck on scene? Well, if you have, chances are you’ve noticed a thing on top that looks like the top of Crow T. Robot’s head on a tall extendable mast.

What you’re looking at is a foldable microwave dish that can be used to send video from a live shot back to a fixed receiver site that forwards it to the TV studio. At the bottom of it is a remote controlled pair of big chonky motors that let you, standing on the ground, pan or tilt the dish to get it lined up with the receive site so the station can see your live shot coming in.

One of ours got stuck in the up position so I needed to pull it apart and fix it and I intended to take some more pictures of the apparatus as it’s kinda cute – it has two big Bodine gear motors driving worm screw drives via little drive chains, and has limit switch cam assemblies to keep you from going past safe travel limits on the thing.

I found the issue pretty soon after figuring out how to open the weird chassis of the dish motor, which opened vaguely like a milk carton – a hinged milk carton made of sheet metal. I’ve never seen anything quite like that and have to give them points for originality, though, if you had to get in there and the dish was stuck in a position other than straight up, you’d have to disassemble the entire shebang from the sides and take the dish off and everything and eww.

Thankfully, this was stuck straight up, and Tina caught a couple pictures of me working on it after I got it open: 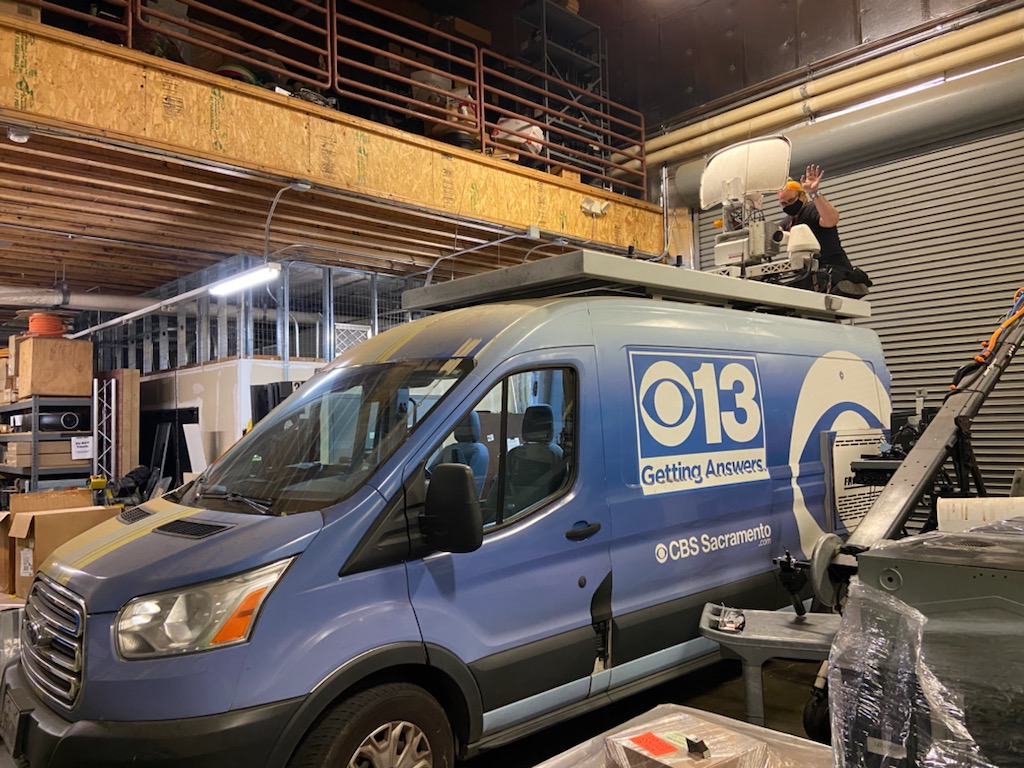 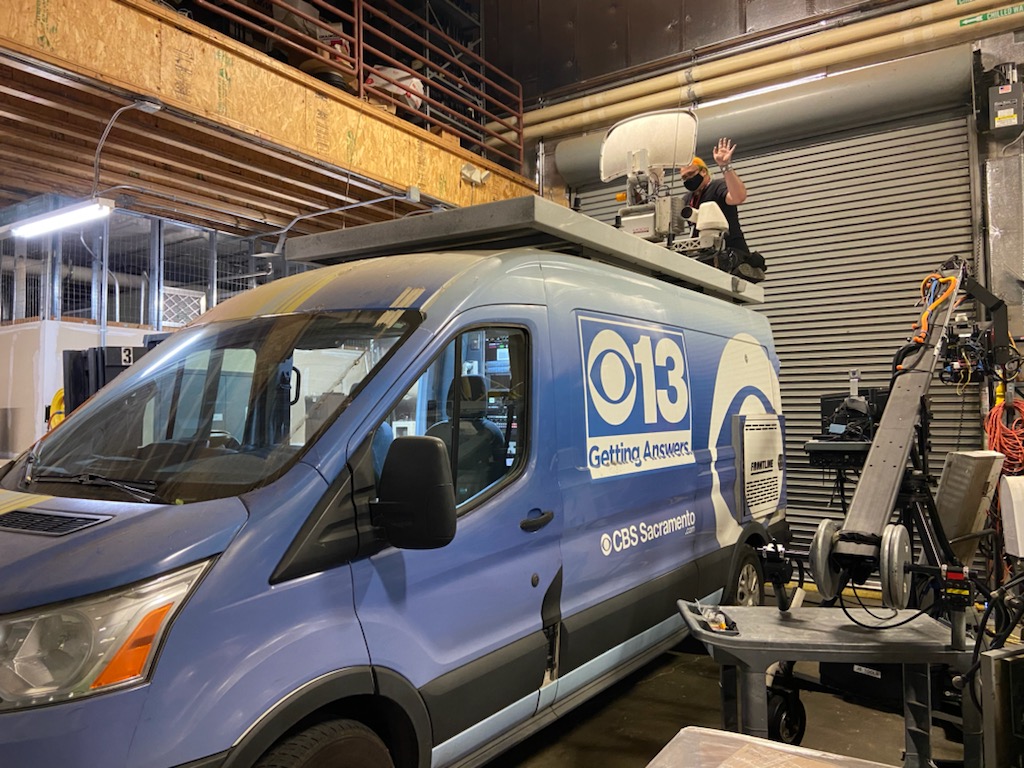 But then the gloop went off.

See, what happened was one of the motor brushes got stuck in the brush holder and wouldn’t advance as it wore down a little, which caused the motor to stop working open circuit. I pulled it apart and managed to get this picture before I realized….. whoops, the armature of the motor and its pressed on bearing were the only thing holding the gloop in. You can see the brush on the right still wedged back in the holder where it can’t actually touch the commutator: 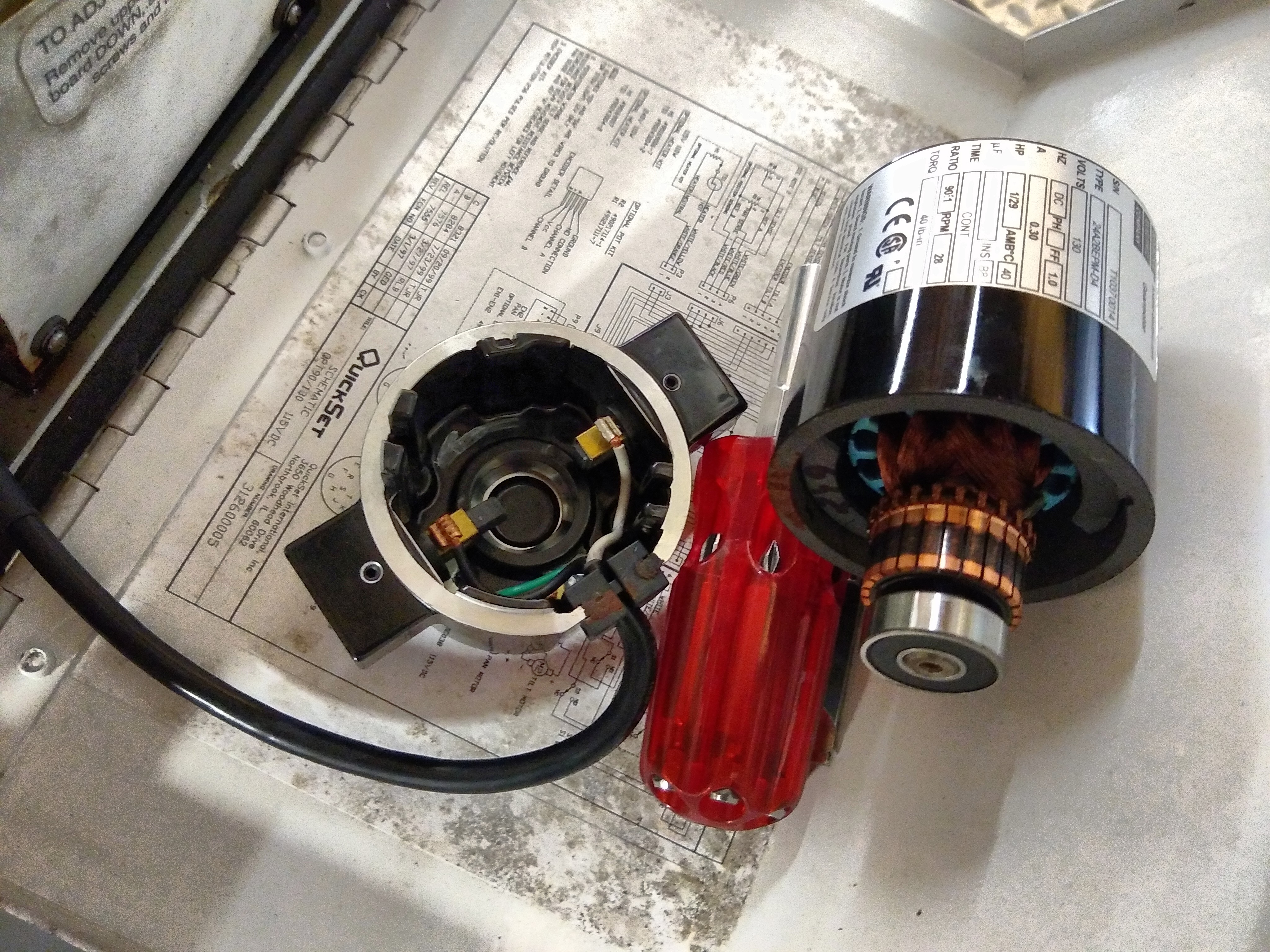 The gloop I refer to is a particularly foul, stinky, sticky, syrupy sort of gear oil, almost all the way up to being a grease in viscosity, but just low enough in viscosity to allow it to make a huge mess in short order. This is the second time I’ve run into it on Bodine motors – there’s no externally visible sign of it having an oil filled gearbox, no fill/drain screw or plug, nothing. You just get a terrible surprise if you dare separate the motor from the gearbox. GLOOOOP.

A fair amount escaped and got all over everything, but there was certainly enough left in the gearbox immersing its guts that I don’t feel I need to disassemble the whole thing and try to refill it. Nah, it’s just a learning experience… AGAIN…. BEWARE THE GLOOP.

Otherwise it will get the song stuck in your head. That song never leaves…. not that it ever has to.

There’s an extended version too

Ok so I recolored my hair and can you even blame me for not being able to get over how amazing it came out?